On Wednesday June 28, 2016 the State Commission on Judicial Conduct suspended Craig Doyal from the offices of the County Judge in Montgomery County. The letter, dated June 28, 2016 stated the suspension, without pay, was effective immediately and cites Rule 15 of the Procedural Rules for Removal or Retirement of Judges promulgated by the Supreme Court of Texas.

“County Judge Craig Doyal and Precinct 4 Commissioner Jim Clark booked themselves into the Montgomery County Jail Friday on charges of conspiring to circumvent Texas Government Code 551.143 for secret deliberations then quickly bonded out.

“The charges stem from an investigation and grand jury proceedings into whether members of Commissioners Court and other individuals violated the Texas Open Meetings Act, among other possible violations, during negotiations in August 2015 that led to the $280 million November road bond election, which voters passed.”

In an update to a series of articles reported in November, BJP received a copy of an as now undated letter asking Montgomery County County Attorney J.D. Lambright to obtain an opinion on the use of rented voters to confirm the establishment of Municipal Utility Districts by election in Montgomery County from Attorney General Ken Paxton

“this advice appears to conflict directly with the decision of the Texas Attorney General’s Office to file third-degree felony charges against James Jenkins, Adrian Heath, Cybil Doyle, Roberta Cook, and Bill Bernson in a voter fraud case.’ known as the RUD 7.”

“This appears to be the free exercise of political activity under the United States Constitutional provision authorizing the rights to “free speech and assembly.”

One couple recruited by Stingray has been used in two such elections in recent years. That all voters used a common mailing address belonging to Stingray Services (which was not their designated homestead), has not called into question the legality of their votes, which seems to conflict directly with the contentions of the Attorney General’s prosecution of the RUD voters who’s mailing addresses, income cases, included houses which they claimed as homesteads in filings with the County Appraisal District.”

Bagley also brought up the reported ten law enforcement officers known to claim Montgomery County Judge Craig Doyal’s office as their residence for voting purposes, none of whom have been prosecuted by the Attorney General’s office for “illegal voting”:

“Along the same line, ten law enforcement officers are known to be claiming the Montgomery County Judges office as their residence for voting purposes and none has been prosecuted by the Attorney Generals’ Office for “illegal voting” under the Election Code as the RUD voters have been.”

The official sanction and permitting of a “Temporary Voter Trailer” by the City of Conroe for use as a voter residence was also raised by Bagley.

Bagley’s request to Lambright seeks an Attorney General opinion on the following questions:

A date has been set for oral arguments in the appeal of James Alan Jenkins voter fraud conviction. Jenkins was charged by grand jury indictment for violating 64.102 (a) 1 of the Texas Election Code for voting in an election in which he knew he was not eligible to vote.

A Montgomery County jury convicted Jenkins on June 27, 2013 and he was sentenced to three years in jail and a fine in the amount of $10,000.

On June 4, 2015 the Court of Appeals reversed the judgement and remanded the case for a new trial.

In 2010, ten people challenged a developer-controlled special purpose district in The Woodlands, Texas called The Woodlands Road Utility District #1. Based on the advice of local, county and state election officials they publicly sought and filed to lawfully vote in a special purpose district election and won—and through a subsequent politically-driven prosecution—four of them, including Jenkins were sentenced to jail.

and referenced the Texas Supreme Court decision in Mills v Bartlett where the court declared that:

—the full force and resources of the Office of the Attorney General were brought to bear upon The Woodlands RUD Ten for following the very advice that local, county and state election officials not only recommended they seek but provided in writing to them—and registered to vote using the address of the Residence Inn located within the boundaries of the RUD and subsequently voted in the May 8, 2010 election.

There is no Texas law specifically requiring someone physically live in a district they are registered to vote in, only that they have an address to use for residency in that district.

This election loophole was recently reported as used in both Fort Bend and Montgomery Counties through Rent-A-Voter services whereby two developer-chosen  voters are “moved” into a 6 month temporary trailer for the purpose of voting in MUD elections for the passage of millions of dollars in bonds and the tax levied on future property owners in the MUD to repay the bond debt—meeting the requirement to have an address to use for residency in the MUD district—yet not planning to reside more than 6 months in the temporary trailer.

There is also no law stating a voter can’t use the intention of voting in a particular election as grounds for changing their residency.

Issued April 19, 2010 and more than two weeks before the May 8, 2010 RUD election Carol Gaultney, then Montgomery County elections administrator and registrar, contained a:

“list representing a best effort to accurately identify all eligible voters within the boundaries of The Woodlands Road utility District #1.”

The Gaultney Certification Letter was referred to during Jenkins’ trial court testimony but was excluded by the trial court from admission as a defense exhibit.

Oral arguments will start at 9:00 am in Austin.

Former Texas State Representative Steve Toth is one of three candidates in the Republican Party primary challenging Congressman Kevin Brady. Brady, a member of the entrenched political incumbency since 1991 claims on his website to support his constituents holding him accountable for his votes and now Toth is taking Brady to task for voting to fund the very jihadist travel to America Brady claims to oppose.

Here’s a screen grab from Brady’s Twitter feed on his “refusal to let dangerous jihadists travel to the U.S. “(click to enlarge:) 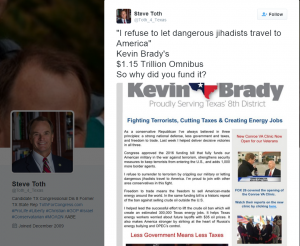 In an update to a story BJP first reported on October 14th titled “When election results have to come out the way a developer & bond counsel want it to—who they gonna call?” BJP can report a fourth outbreak of potential Rent-A-Voter has been confirmed–this time in Fort Bend County.

The Rent-A-Voter phenomenon was first observed this election cycle in Conroe, Texas and it all started when Friendswood Development Corporation sent Michael Johnson to present plans for a new community and the formation of a new MC MUD 148 to Conroe City Council.

Through the mailing address on their Montgomery County voter registration information and the MC MUD 148 Temporary Voter Trailer Building Permit, the voters were linked to the 20615 Marilyn Lane, Spring, Texas address of Stingray Services.

At the time of the October 14th story Stingray Services boasted on their website:

We locate residents, perform landlord services support residents in changing their license and voter registration and assist with the district election. We have worked with a host of major developers and engineers including Lennar, Toll Brothers, Friendswood, Land Tejas, Taylor Morrison, Pate Engineers, Brown & Gay—to name just a few.”

As of today though the Stingray Services website no longer contains their —ahem—extensive resume.

As for the outbreak of potential Rent-A-Voter in Fort Bend County, Fort Bend County Election Central’s website reported the results of a Proposition II-Proposed Williams Ranch MUD 1 election where two registered voters were poised to approve almost $134 million in bonds, the tax rate to levy on future property owners and the four MUD directors.

Which is the address of Stingray Services.

Exit question—if former Dallas County JP Carlos Medranos was sentenced to jail for inducing family members to move to addresses long owned by that family to vote for him in a tight election, how do Stingray Services and Stingray Elections LLC get to neatly package the same concept and actions into a business without so much as the bat of an eye?

And if The Woodlands RUD voters had owned a Rent-A-Voter service business would they have been prosecuted with the zeal and government force of  the Texas Attorney General’s office?

Rent-A-Voter has been covered by the Houston Chronicle, ABC13, Raging Elephants Radio, and the Austin American Statesman.

Montgomery County voters will head to the polls next week to cast a YEA or NAY vote on Constitutional amendments, school district bonds, and management district bonds but two people with a Conroe residence will decide the fate of over $500 million dollars in parks, sewer, water, and road bonds for one newly-created municipal utility district in Conroe.

The two voters will also cast a ballot to tax future homeowners to repay the bonds sold to finance the construction of roads, water and sewer lines and recreation, as well as vote for the five MUD board directors.

The two voters, one male and one female, are said to be residing in this trailer with newly built wooden stairs located on the western edge of the district. This residence trailer is self-evidently a temporary structure as it in no way conforms to the proposed development and hence cannot be construed as a permanent residence.

Although the two voters in this temporary dwelling have mailing addresses in Harris County, they will determine the tax rate on future homeowners in this Montgomery County MUD.

The City of Conroe first heard the presentation about the proposal to create Montgomery County Municipal Utility District 148 located off Loop 336 East as an In-City MUD during a February 2015 city council meeting. During that meeting the Friendswood Development Company presentation outlined just under 300 single-family homes selling for about $200,000 to be built on approximately 83 acres.

After the enabling legislation SB2056 became law in June 2015 and two days after the bid was posted to clear approximately 82 acres, two people registered to vote using an address inside the boundary of Municipal Utility District 148 as their residence.