Some Fort Bend citizens are petitioning their government for redress of grievances; will Fort Bend County officials respond with an Anti-SLAPP motion to strike?

Thursday September 22nd, 2016 may be a watershed moment affecting not solely the citizens that brought forth an “Ultra Vires” suit against 23 elected officials in Fort Bend County, but every Texas news outlet AND citizen educating their friends, neighbors and the public on government actors acting outside their legal authority.

It appears that Judge Elliott is going award attorney fees and possibly sanctions with the intent purpose to discourage any other Lawyer or Citizen from bringing suits against Government Officials in their Official Capacity. The problem is that Judge Brady Elliott is a Fact Witness in the Litigation in his court and he is a Defendant in a severed case dealing with the exact same causes of action and class members.

Justice will be thrown into complete chaos at 9:00AM in the 268th Judicial Court in Fort Bend County. The Court is located at 1422 Eugene Heimann Circle, Richmond, TX 77469. I would encourage all citizens to show up at the court and show their support for the Constitutional Right to Petition Government Actors in court for acting outside their legal authority.

A strategic lawsuit against public participation (SLAPP) is a lawsuit that is intended to censor, intimidate and silence critics by burdening them with the cost of a legal defense until they abandon their criticism or opposition. Such lawsuits have been made illegal in many jurisdictions on the grounds that they impede First Amendment freedom of speech.

It’s not necessary for you to have followed all the details of the cause of action known as the Roach case, only that you know a class action lawsuit filed Wednesday May 6th, 2015 claims the Fort Bend County Truancy Court was not authorized to operate under the Texas Legislature and alleged the Fort Bend school district of operating an automated program to mass-produce citations that summon students to appear before the county truancy court without due process.

Kudos to Harris County Tax Assessor-Collector Mike Sullivan for avoiding a circumstance that might have created the appearance of impropriety in the Tax Office. Revealed within one page of a recent document drop is an email in which Sullivan reprimands a former Tax Office employee for creating the appearance of using Mr. Sullivan to get a job for the daughter of an elected official.

Swanson asks Sullivan if he has any ideas she can pass onto Rep. Pena: 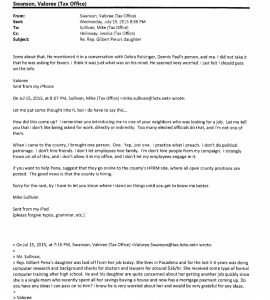 Sullivan’s’ response to Swanson suggests this is not the first time Swanson indirectly inquired about a job for someone close to her:

“I remember you introducing me to one of your neighbors. Let me tell you that I don’t like being asked for work, directly or indirectly….I don’t do political patronage.”

The disclosure of this information represents a potential circumstance that could have created an appearance of impropriety in the Tax Office—in direct conflict with Section 2.02 of the Harris County Ethics Policy.

There’s good news for school districts in cities across Texas working with the cheap labor refugee industry to flood your community elementary, middle or high school with more non-English speaking students requiring treatment at the new lice centers opening up across the state. They can (and have) applied for the Targeted Assistance Discretionary Refugee School Impact Grant which uses your tax dollars to “help” refugee students and their families access the public school system.

For the budget period August 15, 2015 through August 14, 2016 your tax dollars went to school districts in Austin, Dallas, and Houston and to resettlement/ social service agencies in Fort Worth and San Antonio under the (RSI) grant.

Some of the services provided to these “students” and their families included:

Documents provided by the Texas Department of Health and Human Services revealed outcomes, accomplishments and observations from the grant funds:

“A total of 2,300 refugee students and parents received School Impact services during this semiannual reporting period (94 percent of the state projection of 2,448 refugees served). This total included 1,385 school-age refugee children and 915 parents.”

“There continued to be large numbers of Iraqi, Burmese, and Afghani families in need of services across the state. Other large groups included families from Cuba, Congo, Somalia, and Iran.”

People imported by the cheap labor refugee industry also migrate from their destination city to neighborhoods and school districts across the state:

“The number of refugees who resettled and/or migrated to Texas is among the highest in the U.S. Refugees are concentrated in multiple, large metropolitan areas, as well as smaller cities and towns across the state. In larger cities, some refugee families live in metropolitan neighborhoods that spread across different school districts.”

And, depending on your perspective, that glut of vacant apartments in existence and currently under construction in the Harris/ Fort Bend County area sitting empty can easily be filled by people imported by the cheap labor refugee industry who need services funded by more and more of YOUR tax dollars:

“Due to the location of affordable housing, there are concentrations of refugee families in areas of cities where low-income housing is available, resulting in a concentration of refugee students in various campuses. However, refugee families reside and attend schools throughout each community, especially in larger cities. This distribution, coupled with the diversity of refugees typical in most Texas cities, means that in many schools multiple languages and ethnicities are represented. This increases the challenge to focus resources on translation and interpretation services.”

According to these documents, one “promising” program was launched in Alief ISD which is adjacent to Fort Bend ISD:

Last month a Texas Tribune article highlighted Texas’ ultimate win against the Big Federal Government social-justice warrior-led effort to force suburban cities to surrender their local zoning policies through a type of back-door annexation via the imposition of low-income housing quotas under threat of litigation.This issue should represent a topic Fort Bend County Republicans could campaign on—but for reasons I’m about to outline, I’m guessing they probably won’t.

In the wake of a recent U. S. Supreme Court decision designed to impose low-income housing quotas on the residents of suburban communities through the Texas Department of Housing and Community Affairs tax-credit program, the lawsuit over housing segregation in Texas was dismissed.

On August 26, the Texas Tribune reported U.S. District Judge Sidney Fitzwater found the Inclusive Communities Project could not prove the existence of a State specific policy resulting in low-income housing projects approved for construction in mostly minority areas (emphasis mine):

“…ICP has failed to point to a specific, facially neutral policy that purportedly caused a racially disparate impact. By relying simply on TDHCA exercise in discretion of awarding tax credits, ICP has not isolated and identified the specific practice that caused the disparity in the location of low-income housing.”

The defeat of an attempt to force low-income housing quotas on suburban cities through fear of potential and protracted litigation at huge taxpayer expense is an issue custom-made for Fort Bend County Republicans to campaign on through Election Day.

However I’m guessing they probably won’t.

Even Houston Mayor Sylvester Turner knows this is a winning issue for Republicans that could draw more voters to the polls in November—why do you think he HIMSELF pulled the plug on a tax-credit financed apartment complex at 2640 Fountainview?

So why do I think Fort Bend County Republicans won’t touch this issue with a 10-foot pole?

And it would open up State Representative Rick Miller to questions about why he was incapable of even MAKING a decision on a project.

Stanley Kurtz was right when he opined about the GOP being silent on a YUGE and potentially winning campaign issue for Republicans:

“A smart Republican party would expose all this, save itself, and split the Democrats. But that’s not the party we’ve got.”

Fort Bend Independent School District has halted construction of Elementary School 49 in the Harvest Green community. Citing “procurement errors”, the school, funded through the November 2014 bond program, was slated to open in August 2017.

According to the press release issued by the school district, the “error” detected pertained to a notice of Competitively Sealed Proposal or bid package that was not properly advertised in a newspaper as required by law.

On Friday August 12, FBISD notified Drymalla Construction Company LLC to suspend work after the District could not verify the newspaper advertising took place.

Back in June 2016 Fox News reported on a Houston VA hospital found to have altered records to hide lengthy patient waiting lists—the result of a Veterans Administration Inspector General audit.

“A Houston VA hospital altered records to hide lengthy patient waiting lists even as a national scandal regarding treatment of veterans was unfolding, a federal watchdog charged in a scathing report released this week.

Officials at the Michael E. DeBakey VA Medical Center in Houston and its associated clinics altered records to make it appear that hundreds of appointments canceled by staff were really called off by patients, according to the VA’s Office of Inspector General. The federal audit determined the changes were made to hide unacceptable wait times as VA hospitals around the country were under fire for neglecting patients.”

“The greater problem is that our veterans, who have already borne the cost of war, are now required to bear the cost of not receiving the care they deserve,”

Those lengthy patient wait times for veterans uncovered by the IG report contrast sharply with the virtually no-wait-times experienced by the “refugees” imported into Texas by the “refugee resettlement racket” with your tax dollars.

The State of Texas 2016 State Plan for refugee resettlement reveals 100 {997ab4c1e65fa660c64e6dfea23d436a73c89d6254ad3ae72f887cf583448986} of refugees received a health care screening within 90 days of arrival or program eligibility according to documents released by the Texas Department of Health and Human Services. Refugee State Plan 2016 – FINAL.PDF.pdf

“Desk audits are performed on a tri-annual basis to ensure that LHD (local health department) refugee program clinics are not initiating care beyond the 90 day mark.

This revelation in the State of Texas –State Plan for the Refugee Program has new meaning this week following a story on ZeroHedge about a 74 year-old military veteran who committed suicide in the parking lot after being denied service at the Northport Veterans Affairs Medical Center on Long Island.

Exit question: after reading the 2016 State Plan for the Refugee Program what will you ask your State Senator or State Representative to do?