*PLEASE SHARE!* TONIGHT this year's 3rd Quarterly Executive Committee meeting of the Harris County Republican Party is broadcast *LIVE* right here on Facebook. Watch gavel to gavel coverage of this momentous gathering as new precinct chairs are sworn in, issues affecting all of Harris County and Texas are discussed, and resolutions are debated and adopted. Send us your comments and questions!

Lt. Dan and Senator Huffman speak in the beginning of the video and a series of votes on the resolution language begins at the 2:18.55 mark (or -21:29, depending on how your viewer works).

Dan Patrick and his political consultant Allen Blakemore were working the room when I arrived. I visited with a couple of folks trying to see if I missed anything.

Patrick definitely misread the room. I watched Lt. Dan speak with folks, making his point and moving on to the next person. Folks would nod in agreement and Patrick would move over to someone else. I knew Patrick and Huffman would not bother to stay until the resolution was heard, they didn’t. Of course, the Exec Committee would do what Dan said he did not need to stay. “I am Dan Patrick, and you know Hurricane Harvey was really bad and I am off to get an update from the Governor.” And then there was poor Senator Huffman who Lt. Dan left helplessly trying to explain all the good work of the elitist Republican establishment types. You know, the big government, pro-illegal immigration, C-Club contractor crowd – self-interest types. The folks who have completely messed everything up to date, those guys. Senator Huffman kept pointing over to her left at some of these folks. I am still convinced that Joan has noclue what her pension bill does or how it works. Her nails and hair looked good though. 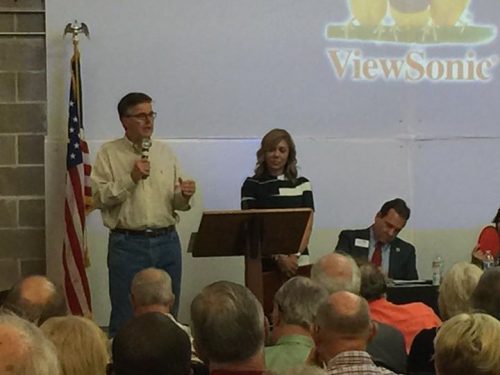 The new number in cuts is now $2.54 billion in cuts from the unions, according to Senator Huffman. I am going to find the guy who can explain them to me. I am pretty sure I can’t go to Senator Huffman. Sly Turner says the number is $1.4 billion, he’s real liberal you know. Ole Sly used to tell folks it was $1.9 billion. I am pretty sure you would hear no number if their audiences contained both Republicans and Democrats.

The grassroots of the Republican Party had lost their way in the wilderness, but they found their way home last night. This was a big defeat for Dan Patrick who has lost his way too. I am tired of being upset with Dan and Joan. I just want them to find their way home or not. The grassroots of our local party is smart, and they figured out that they may not be able to afford to be friends with the police anymore. Dan and Joan don’t see this because the police pay them to hang out. It’s kind of like a neighbor who has joined a new country club and they only invite certain of their old neighbors to come hang out. Some friends are invited for their company while others are invited because they are expected to pay up and join. Of course, there are those that just can’t afford it.

Hurricane Harvey had suddenly re-prioritized the importance of good fiscal government. Government thinks they are the answer to everything, they are not. We are the can-do spirit that made Houston and Texas great. The politics of hurricanes is always interesting. The grassroots activists who are the Harris County Republican Party are fighters. A lot of folks in the room had been flooded out and had lost their homes and businesses. The last thing anyone wanted to hear about was pension bonds. Where are Kevin Shuvalov and Chris Beavers when you need them?

I would like to thank the Harris County Republican Party Executive Committee who voted against the pension obligation bonds. In case you don’t know there are 600 plus members. This was a big message and I appreciate it! Thank you! Special shout out to Rolando Garcia who spoke eloquently to defeat the proposal.  Again, congratulations to the men and women of the Harris County Republican Party.

I have never been more proud of you.

Will a #NeverTrumper be able to lead the Harris County Republican Party to victory in 2018? Paul Simpson has kicked off the new year with a series of meetings to try to justify his losing campaign of 2016. Simpson and his team met separately with bloggers, including David Jennings and me, candidates, and judges and he is now on a road show to explain his losing 2016 campaign. Simpson has a lot of data to go with his talking points as to why Harris County Republicans did so poorly. This is my review of Simpson & Co.’s efforts in the 2016 election cycle.

Simpson and his consultant, Kevin Shuvalov, prioritized voter turnout in HD 134, home to Sarah Davis. The re-election of Sarah Davis, the self-identified pro-choice “Republican” was a priority to Joe Straus as Davis carried all of Planned Parenthood’s bills last session.

In the 2016 election, Texas Right to Life specifically targeted and campaigned against two Harris County “Republicans”: Sarah Davis and Devon Anderson. By now, you know that Anderson prosecuted pro-life heroes David Daleiden and Sandra Merritt for their brave videos that unveiled Planned Parenthood’s misdeeds. It should be noted that Davis endorsed Anderson.

Davis’s district is one of the most liberal Republican leaning house districts in Texas. When Anderson, in a last ditch effort to defeat her opponent, claimed that her opponent would be a weaker district attorney because of her sexual orientation, I know that Davis had to think twice about her endorsement.

Davis and the Harris County Republican Party were aided by Kevin Shuvalov, a political consultant who also does work for Straus. A very rudimentary knowledge of HD 134 and Harris County would have told you turning out the vote in the most liberal house district would not be helpful to countywide Republicans, it was not. It did help Sarah Davis.

At the outset, it was clear that Harris County Republicans would have an uphill battle. Given Ted Cruz’s posture, many of his supporters were #NeverTrumpers. Instead of using the momentum of conservative victories such as the defeat of the so-called equal rights ordinance, Simpson and the gang harnessed the #NeverTrump movement and explicitly directed voters to not worry about the top of the ticket but make sure that they vote for our judicial candidates. This approach was flawed in many ways.

First, Simpson never made a compelling argument for a Republican judiciary. Why are Republicans better on the bench? Second, by running a #NeverTrump campaign, Simpson failed to get Trump supporters to the polls.

Simpson is now claiming that two factors led to the downfall of Harris County Republicans: (1) Donald Trump and (2) Devon Anderson. Anderson’s horrendous decision to jail a rape victim and indict pro-life activists certainly did not help the Harris County Republican effort in 2016. Whether you agree or disagree with Anderson’s positions, the real damage was the endless fodder for campaign commercials that she provided to her opponent. Judging Anderson by her record, she was a failed district attorney and had to go.

Unbelievably, Anderson’s campaign made a succession of errors. First, she made this video immediately after Channel 2 broke the story on Jenny, the jailed sexual assault survivor. Then, it was revealed that another survivor and a witness were jailed in order to compel their testimony. The Anderson campaign, while criticizing her opponent for “using” Jenny, deployed Jenny’s father as a campaign tool to say that he supported the jailing of his vulnerable child by the Harris County District Attorney’s Office.

Paul Simpson’s belief that moderate, establishment Republicans could win elections in Harris County without social and fiscal conservatives is a false narrative. The biggest mistake in the campaign was to not utilize our most recognized successful brands. There are three brands that have been out for over twenty years: Conservative Republicans of Harris County (Hotze), the Link Letter (Lowry), and the Texas Conservative Review (Polland). Voters are conditioned to these brands in primary and general elections.

All three brands focus on different turnout. Hotze messages to seniors in a mail-in ballot program. Hotze’s brand is very effective and seniors expect to get his piece in the mail the way they have for over twenty-four years. Lowry’s Link Letter focuses on early voters and systematically sends the Link Letter out to well-conditioned voters. Both Hotze and Lowry have an identifiable social conservative voting base. Polland is different and I will come back to that in a minute; however, the sophistication of these so-called slates is unique.

Branding is important and Hotze and Lowry understand that social conservatives are reliable voters. The social conservatives can sway primary votes and this is where their influence has been most visible. Simpson and company have underestimated these brands in general elections and actively worked against them. The 2016 election proved this point.

Gary Polland and the Texas Conservative Review focus on election day voters. Gary’s brand is a reflection of him and is the most moderate of the three brands. Gary’s brand is influential in general elections and has a conservative Jewish following. Watching what Barack Obama did to Israel on his way out the door gives us an excellent opportunity to expand our base in Harris County. Gary is Jewish in case you did not know. All three of these brands work well together in general elections.

Simpson does not want to recognize the importance of these assets. Donald Trump certainly knew that he needed social conservatives to win the Presidency just as Simpson needs social conservatives to win Harris County. I have asked Simpson more than once what his plan is to unite the local party. He does not have one. This will not sit well with Republican candidates on the 2018 ballot. Simpson may have been a transitory candidate and the efforts to replace him are well underway. The question is will he be replaced by a candidate who can reach out to all factions within the local party. This will not be an easy task.

The protesters, according to eyewitness reports and the below photos but NOT mentioned in the Houston Chronicle article, put themselves forth to be members of HOPE; the Houston Organization of Public Employees and the Texas Organizing Project. My source also verified bullhorns and foul language were used and protesters went into individual offices that have no association with the Harris County Republican Party, also located in the same building.

Attached are pictures taken (and printed here with permission of the photographer) of the protestors INSIDE the building with bullhorns (peaceful protest, right?).

If these miscreants are so upset over Mayor Parker’s decision to provide tax incentives for the construction of luxury high rise homes..if they’re so angry over the President’s Food & Drug Administration decision to revoke use of Avastin in breast cancer treatment, maybe they should be protesting outside Houston City Hall, the White House or the Harris County Democratic Party offices?