We’ve already established that the 2016 General Election was a disaster for the Harris County Republican Party. Okay, we didn’t really have to establish that, all we had to do was look at the results. As in zero candidates winning. That’s pretty bad, right?

Frankly, I don’t think that the Republicans in Harris County that I talk to understand how bad it was. Of course, most of those people are ‘insiders’ and their real goal is to protect their turf. Or reputation. By making excuses for the outcome. Or, in a few cases, blaming the leadership of the party. Or, in a lot of cases, blaming the top of the ticket, as in President-elect Donald Trump for the poor showing.

It is interesting to me that most of the ‘man or woman on the street’ types that I talk to (i.e. those people that have lives and don’t worry about this stuff) don’t care at all the Harris County Republican Party. All they know is that Trump won (yippee!) or Trump won (yikes my life is over!). There doesn’t seem to be much middle ground between the two extremes. But that is probably a subject for later.

For now, we still need to figure out why the HCRP got wiped out. And the only way to do that objectively is to look at the data from the election. You can’t simply say ‘Never bet against Trump!‘ if you want to change the results for Republicans in Harris County.

The more I review the data, the more the answer becomes clear. If you go back and read the previous posts about the outcome, I’d bet that most of you see what I see. Instead of pointing it out, all I’m going to do is give you data from the official canvass report. If you are new to Harris County or new to thinking about political results in general, it might be harder for you to see but hang in there, the answers are clear. As well as the solution. Never present a problem without a solution, right? So look for it and then we’ll compare notes later.

Let’s start with the results in Harris County by Congressional District. Harris County has a total of 9 Congressional districts but only 4 of them are wholly in the county (CD2 – Ted Poe, CD7 – John Culberson, CD18 – Sheila Jackson Lee, and CD29 – Gene Green). Red for Republicans, blue for Democrats.

Let’s sort it by turnout percentage:

Some of you will no doubt notice that the Democrats have the lowest turnout percentage but their margins for Clinton are so large that they carried the day. Think about that for a bit and what it means for the future.

But hey, those are Congressional Districts! What about something closer to home like State Representatives? Surely Republicans can find some positives there. Harris County has 24 State Rep districts. Prior to the election, they were split 50/50. With Gilbert Pena’s loss, the Democrats now have a 13-11 advantage. For these purposes, Pena will be in highlighted in red because he is the incumbent. 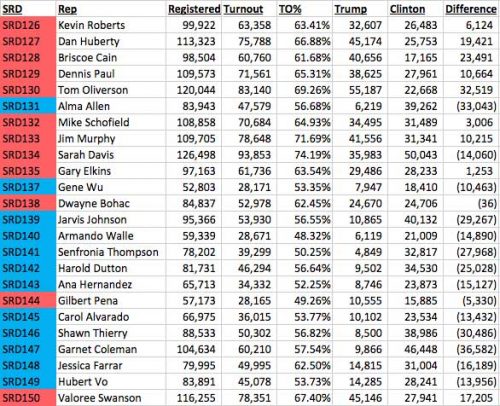 Let’s take a look at those same districts sorted by margin of victory for Clinton. 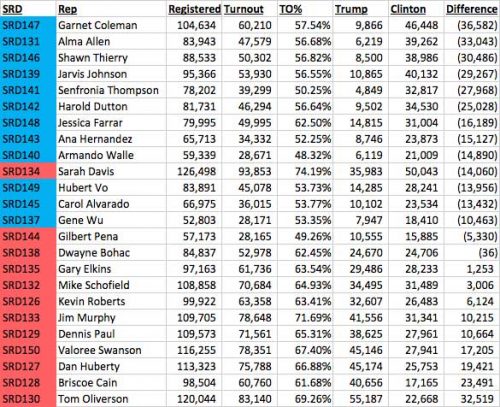 Even though the split is 12-12 prior to the election, Clinton won 15 of the districts. And Clinton fared better in vote difference in Republican Sarah Davis’ district than she did in three Democratic strongholds. Interesting. 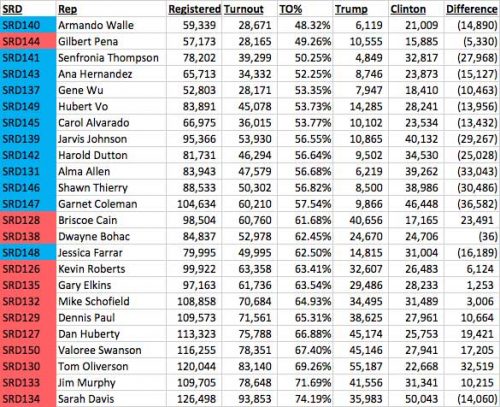 Only one Democratic State Rep district had a turnout percentage greater than 60%, Jessica Farrar in SRD148. What does this mean for the future? Let’s look at the growth potential for the districts: 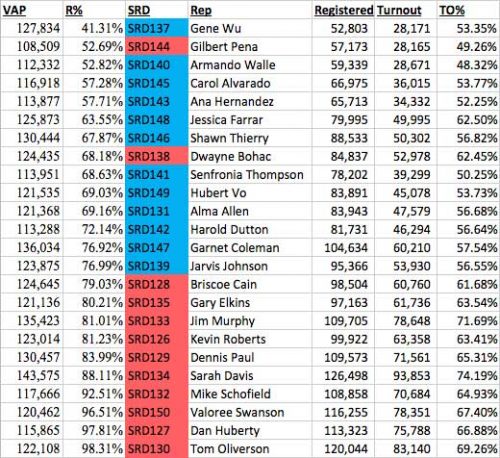 A couple of things stand out. First, let’s get on the same page. The VAP is the Voting Age Population for the district. The R% is the percentage of the VAP that is registered to vote. The table is sorted by R%, lowest to highest. Lots of blue in those low R% areas (I gave you a hint for a solution).

The most striking example that I found when reviewing the data was what happened in the vote by County Commissioner Precinct. Let’s take a look at how Trump did by CC Precinct. 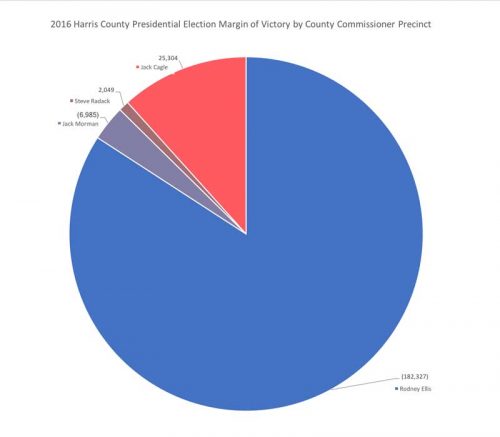 But, but, Trump sucked as a candidate you say! I hear you, so I did the same chart for the District Attorney’s race. I like that race because only a die-hard Republican would vote for Devon Anderson.

Again, Precinct 1 swallows the Republican precincts. Think about that, I promise it will come up in a test later. If you want the actual numbers, here you go, including the Tax Assessor Collector race: 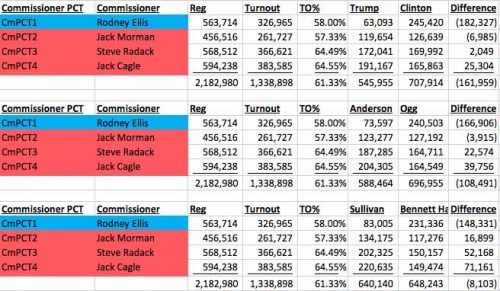 Even in the Tax Assessor Collector race, Precinct 1 wins the day. Why?

One last bit of data for you to ponder. What about new voters? Where were they? 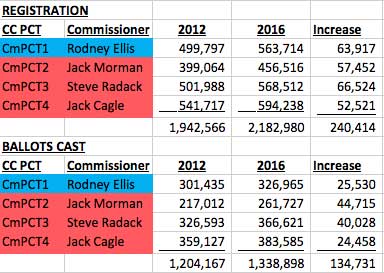 Are you seeing what I’m seeing? What path should the HCRP take going forward?