MOON TOWNSHIP, PA - JUNE 11: Republican candidate for President Donald Trump arrives in his plane to speak to supporters at a rally at Atlantic Aviation on June 11, 2016 in Moon Township, Pennsylvania. (Photo by Jeff Swensen/Getty Images) 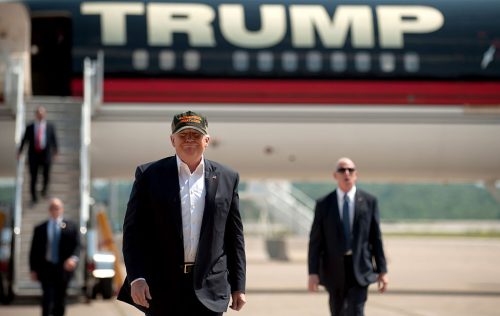 This was the most interesting election of my lifetime. One hundred years from now scholars and political pundits will be writing and talking about this particular Presidential election. Donald J. Trump was not only a most unusual candidate, he also had an uncanny ability to read the electorate. You see the left completely imploding and many on the center or moderate right still in bewilderment that someone could be elected without their money or help. I would make the argument that the fact that Trump’s campaign repudiated the establishment was the reason he succeeded. Two years ago, we had an election in Harris County in which establishment Republicans led by Paul Simpson wrestled control of the Harris County Republican Party from social conservatives. Simpson’s election two years ago had a direct impact on Trump’s race in Harris County, which resulted in the largest defeat of the modern Harris County Republican Party. I wanted to look at the presidential race in Harris County because the establishment Republicans who fund and support Paul Simpson did not want Trump to succeed.

I started looking at the canvass and made a few calls. I always check in with Ed Johnson (PCT 440) because technically Ed knows how to move the needle in his precinct. I, of course, had a theory that the #NeverTrumper precinct chairs did worse than those that supported him.

Looking at Ed Johnson’s precinct, a DJT supporter, you can see a result that differed from the overall county result. Ed supported DJT and his results reflected his desire to support him. Ed has always run the numbers for the Harris County Republican Party and we have known each other for more years than either of us are willing to admit. Ed’s resources are very different as a precinct chair. Ed has the ability to track who has and has not voted in his precinct and can use an auto-dialer to call those who haven’t voted. Ed’s software is very sophisticated. Understand that he has lived in the same home for many years and knows many of his voters through school, church, community, and political activities. Let’s look at what he did for DJT in his precinct. 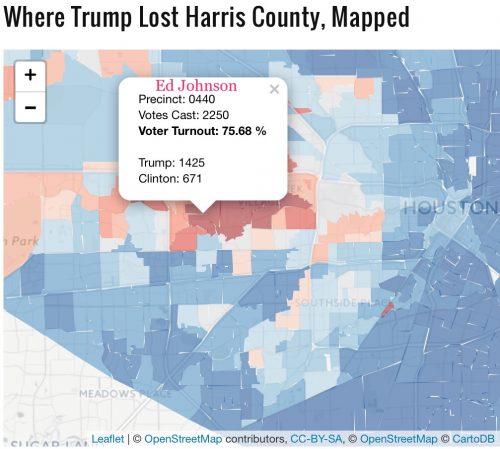 Now, look at Joe Pelati’s precinct. I do not know whether Joe supported DJT or not but it is a different result than Ed’s precinct. Here is someone without the resources of Ed Johnson to message or communicate with his voters in the way Ed does. I know both of these gentlemen and use them as examples because of their involvement in the Harris County Republican Party and the proximity of their precincts. Obviously, Ed Johnson’s messaging in his 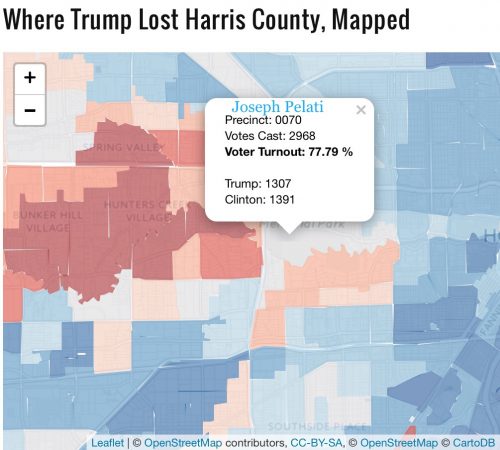 precinct made an impact on the results for DJT. These are “close in” Westside Republican precincts and what I consider to be the heart of where I look for Republican election results. You can tell what is going to happen to Republican voting in Harris County by watching this area.

Let’s look a little further west in Katy. Another party activist and someone engaged in local party politics is Kelly Horsley. Again, Kelly’s GOTV ability is nowhere near Ed’s; but, I do think it is interesting to look at her precinct. Keep in mind that Kelly’s neighborhood is much newer than Ed’s and I suspect that her longevity of knowing her neighbors is vastly different. Although she lives in a Westside Republican stronghold, the results are vastly different than Ed’s precinct. I do want to know if Kelly actively campaigned for Trump or towed Simpson’s party line and chose to not mention Trump and focus on down ballot candidates. 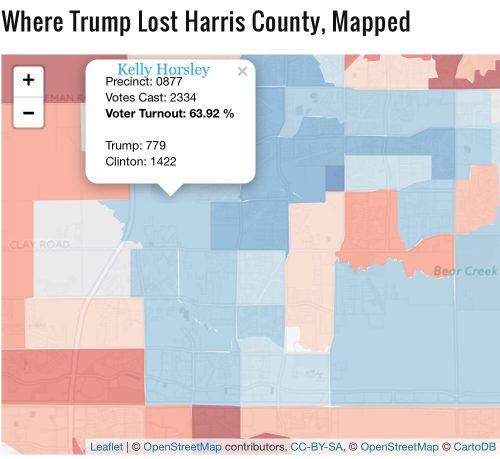 So, let’s look at some more precincts.

The workhorses of the Republican Party are our women’s clubs. We have had some amazing Republican women involved with the Harris County Republican Party. Judith Jones used to have the highest turnout of any precinct in the City of Houston – precinct 289. There were others: Pat McCall, Louise Wing, and, of course, Ann Lee. These women ran their precincts and delivered votes. They met, traded strategies, and competed with each other on voter turnout. They were friends and competitors during a time when the Democrats controlled everything. They turned our county red and kept it that way for years and few know their names. The history of turning our county red is a history every precinct chair should know. 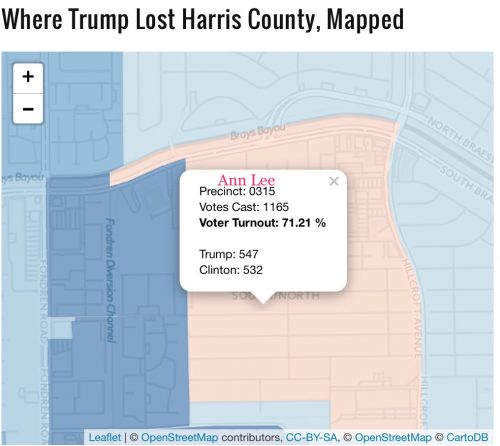 – the party’s version of local control. Every politician in the state darkened their doorsteps. It is an anachronism of times past. The local community-oriented precinct structure was a successful model for years. I say all this because, of course, in a sea of blue, Ann Lee won her precinct for Trump. Ann Lee’s precinct is just west of Meyerland by the Jewish Community Center and dominated by Clinton precincts on all sides. Ann Lee was a strong Trump supporter and a convention delegate. We sit next to each other at the Downtown Pachyderm and never do I fail to learn something from her and her great spirit. 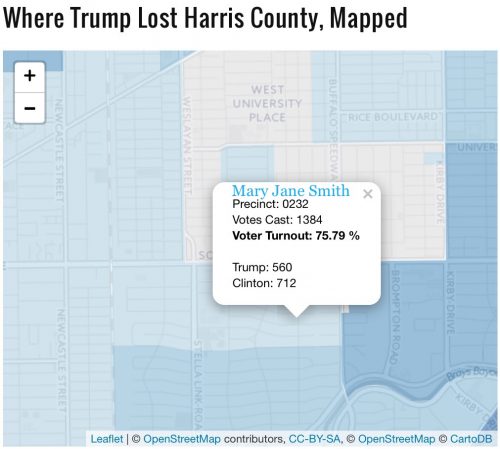 have become increasingly hostile to Israel and the country’s political leaders. Conversely, Evangelicals and the Christian right fight to protect Israel. Let’s take a look at the power hook and see what happened to some precincts headed by local party activists. Not surprisingly, Mary Jane Smith lost her precinct to Clinton. My guess is that MJS worked against Trump. The residents of Mary Jane Smith’s precinct can tell you what her message was for Trump. Experience has told me not to listen to her.

I also looked at precinct 133 led by precinct chair Kent Adams aka Mr. Sarah Davis. Kent’s precinct overwhelmingly supported Hillary Clinton and, I suspect, voted for Sarah. I imagine that Kent failed to support Trump believing that this would help his wife’s campaign. I think that it is important to note that Kent supported Devon Anderson’s campaign and Sarah endorsed and promoted Devon Anderson. Ironically, the Andersons supported Ann Johnson, Sarah’s 2012 uber-liberal general election opponent. I am sure that I will get an explanation someday. 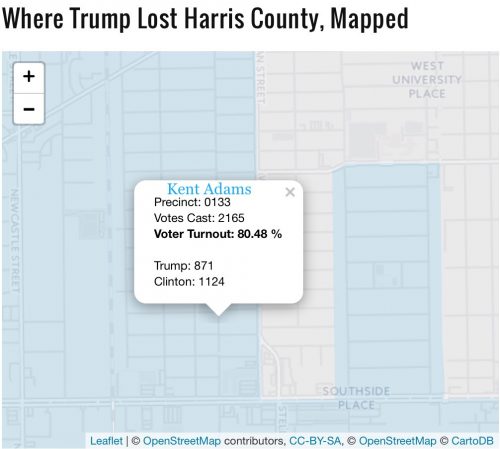 Republicans were crushed in the hook. Another #NeverTrumper in this area is Precinct Chair David Gratvol. Although David’s precinct is a little east of what I consider the hook, I am throwing his precinct in here because he is a big Sarah Davis and Paul Simpson supporter. Also, when the Access Hollywood tape was released, David bet me that Trump would go down in defeat. Had I lost this bet, David would have been eating at Tony’s on my dime. 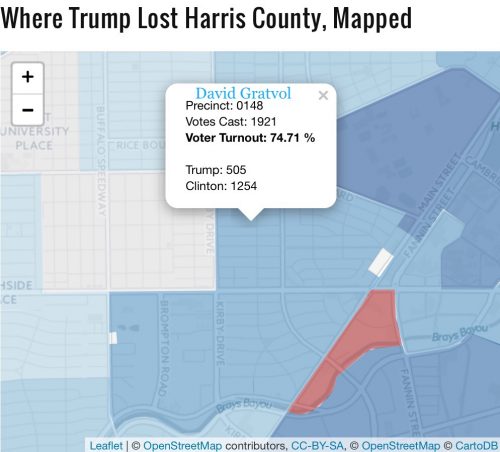 Paul Simpson and the consultant advising him, Kevin Shuvalov, made a tactical decision to run against the President-Elect. Both men did this believing the polls showing that Trump would hurt the down ballot races in Harris County. They treated the entire county as a microcosm of HD 134 – Sarah Davis’s House District. The truth is that the entire county is not reflective of HD 134. Senate District 7, parts of West Houston, Kingwood, and the Clear Lake area voted Trump. The party messaging left little reason for social conservatives to come to the polls and vote down-ballot.

I believe there are a lot of reasons for this failure and the precinct chairs had little or nothing to do with the messaging decisions of the county party. These decisions were made by Simpson, Shuvalov, and their establishment financiers who did not like Trump. The establishment financiers like Norm Adams and Dick Weekley oppose Trump’s strong stand on illegal immigration because they need cheap illegal labor to operate their businesses.

Certainly, Ted Cruz and Devon Anderson were problematic to the local election results too. I do think that many precincts were winnable; but, Simpson’s messaging killed the party and down-ballot races. Understand these are my conclusions following a cursory review of the canvass and I write this for discussion purposes. We can have a well-funded party lacking principals or a principled party with few funds. It worked for Trump!

I have added some other precinct results I found interesting. 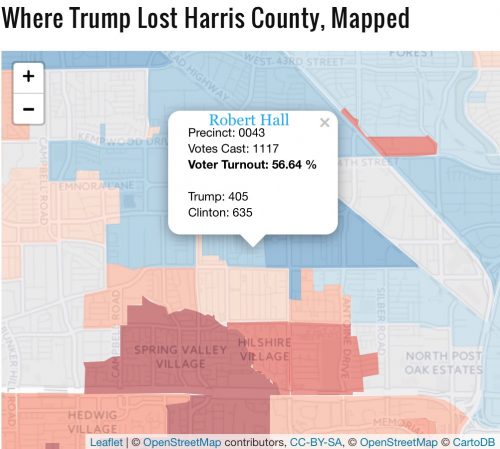 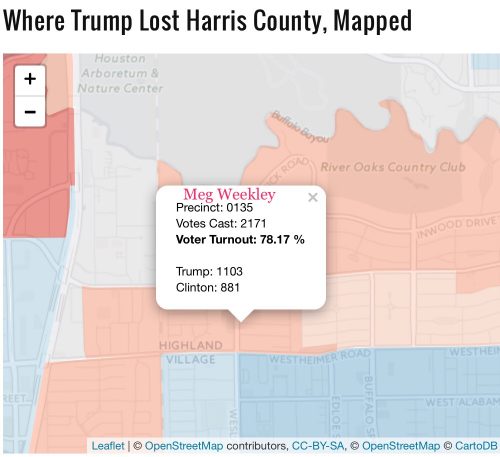 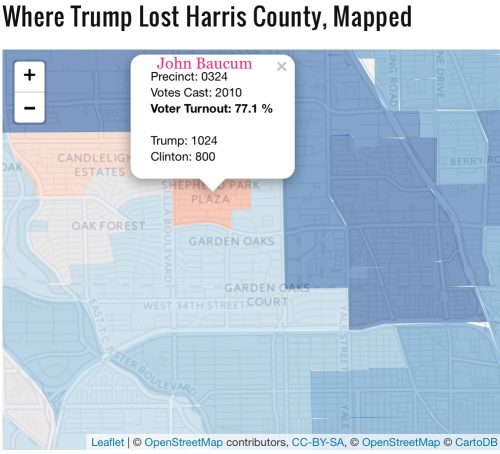 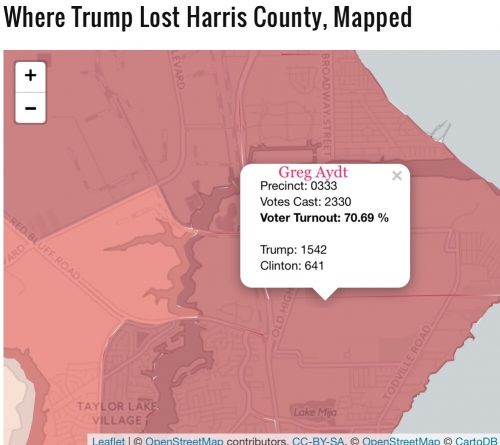 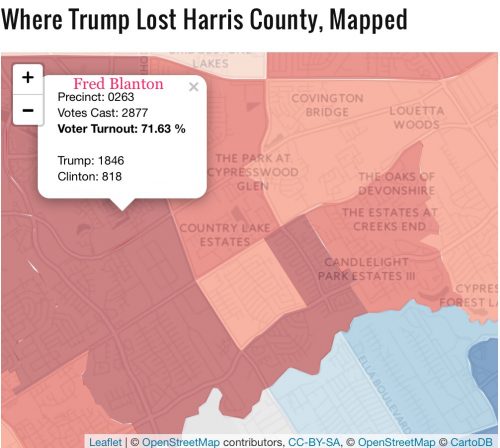 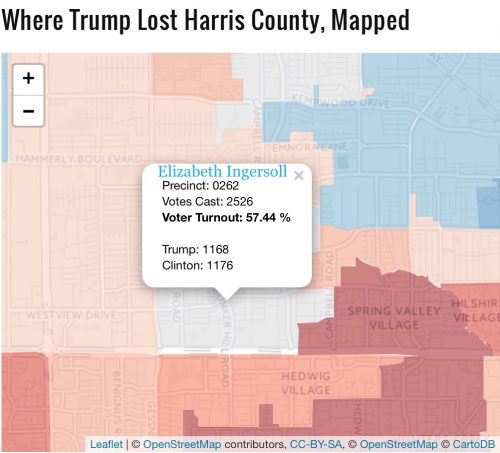 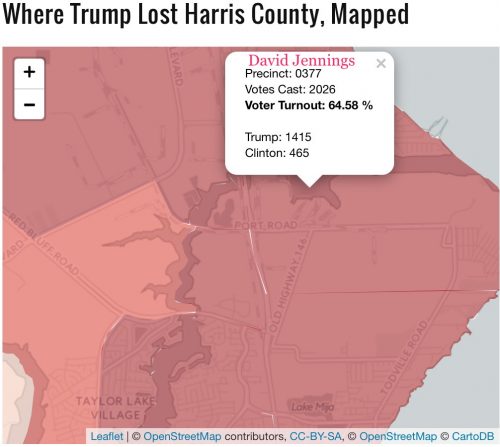 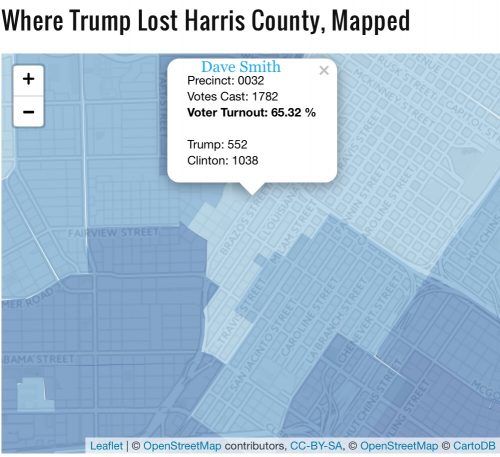 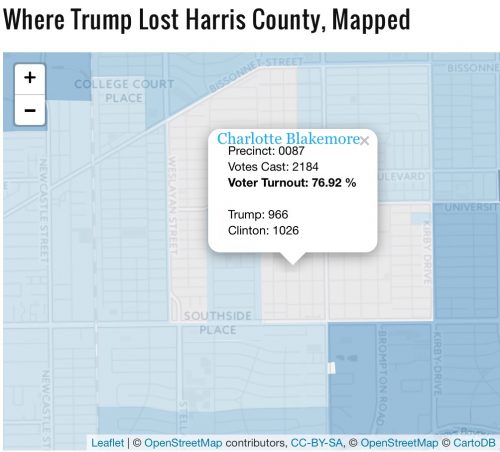 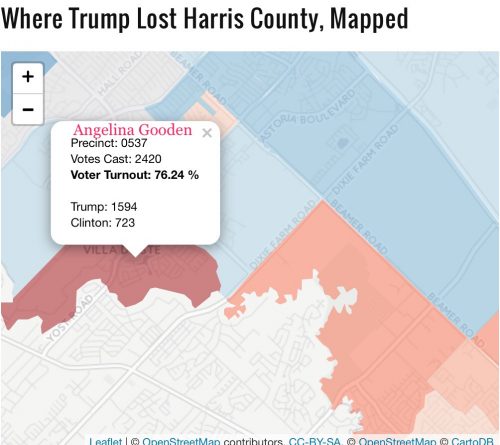