As you know, we provided voters with a matrix of the recommendations of various slates for the 2014 Harris County Republican Party Primary. Two of the  “Big 3”, Terry Lowry and Dr. Steve Hotze, were substantially less influential than in years past. I’m sure there are a variety of reasons for that but it is a fact. The relative newcomer HRBC slate led the pack with a 93{997ab4c1e65fa660c64e6dfea23d436a73c89d6254ad3ae72f887cf583448986} chance of their recommendation either winning outright or making it to a runoff. 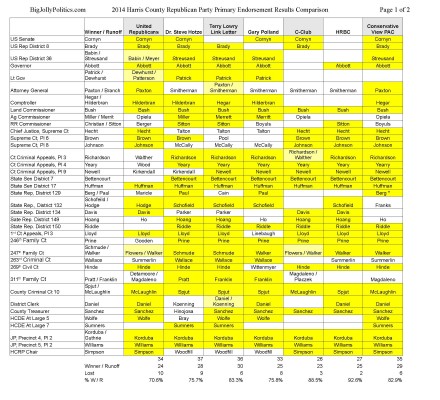 Here are the ones that I know sent out mailers in large quantities:

One of the obvious differences is that HRBC and the C-Club had recommendations in fewer races, making it easier to get higher percentages.

I think that we can say that we are starting to see the effects of having more slates in the marketplace, thus diluting the influence of the Big 3. Here is a comparison of the Big 3 for this year vs 2010:

The 2010 numbers come from this post I wrote in 2010: Do Alleged Pay to Play Endorsements Work?

Although they didn’t send mass quantities of mailers, the Conservative Coalition of Harris County slate’s recommendations were 88{997ab4c1e65fa660c64e6dfea23d436a73c89d6254ad3ae72f887cf583448986} successful. This group is all volunteer, made up of activists in the party. I’d say they did pretty well.

Please note that this is not an in-depth statistical analysis, so don’t bother yelling about correlation, causation, or anything else. I’m putting this out there because I think it is interesting. And because I think that diluting the influence of the “Big 3” is critical to the future success of the Harris County Republican Party.

In case you missed it last night on Houston PBS’ Red, White, and Blue, the two candidates for Harris County District Attorney made a joint appearance. And while it wasn’t officially a “debate”, it was as good as one and better than most. If you are interested in this race, I encourage you to watch it and form your own opinions about it. It is only 29 minutes long and is chock full of information.

I thought that overall, Gary Polland and David Jones did a good job of bringing out relevant information. Obviously, Polland is a Lykos supporter and asked a very irrelevant question about “judicial bypass”, trying to get that issue on the table for Republican voters. But beyond that, it was informative. If you ask me who “won” it, I’d give the edge to Lykos because she came armed with facts and was able to refute most of the charges that are leveled against her. But Anderson held his own and wasn’t embarrassed, although I was surprised to learn that he sat in on a presentation from DA Lykos about the “trace evidence” or “crack pipe residue” program that is controversial and didn’t object to it at the time. Interesting.

On to campaign finance. Here are the bottom line numbers from the reports:

I have asked the Anderson campaign if Richard Anderson is related to Mike Anderson and will update this if I get a response (UPDATE: not related, friends from law school). Prolific GOP contributors Bob and Doylene Perry have donated $55,000 to DA Lykos. And while Mr. Anderson has raised a considerable amount of money in a short time, most of it is from large donors. DA Lykos has far more individual, small contributions – her report lists 25 pages of contributions to Mr. Anderson’s 13. Which prompts me to ask: where are the contributions from the angry ex-ADA’s (or current ones)? You’d think from reading comments on blogs and at Chron.com there would be thousands of small donations to Mr. Anderson – but it isn’t so.

Here are the reports so that you can read them yourself: