Been a bit since I’ve agreed 100% with Tio Pablo but his thoughts on the recently ordered bond election in Harris County is spot on. From the Inbox:

Are the “Dog Days of Summer” Setting in on Harris County Taxpayers?
Series of summer special property tax rate election events coming, but still time to move them to November!

HOUSTON – Senator Bettencourt (R-Houston) is speaking out on behalf of taxpayers following the announcement by more than one taxing jurisdictions that special elections to raise property tax rates will be occurring throughout the Summer and better public policy is to hold them on the November General Election date.  This is occurring so quickly that the Klein ISD Trustees are voting on a TRE election Monday, May 14.

I am worried about voter fatigue as well taxpayer’s pocketbooks!” said Senator Bettencourt. “Rather than spend money on special elections these taxing jurisdictions still have the chance to do the right thing and schedule their proposed tax rate increase elections in November.”

Governor Greg Abbott (R-Texas) granted permission for Harris County to hold an estimated $2.5 billion Harris County Flood Control Proposition on a non-uniform election date on August 25th, the date of Hurricane Harvey’s landfall.  In his approval letter, Governor Abbott highlighted, “…billions of federal dollars either are currently available to Harris County or will be available to the county before it has the ability to issue the bonds requested…”

In their letter to Governor Abbott, Harris County Commissioners Court stated, “We must show the various federal agencies that matching funds are available now in order to apply for Harvey related grants that are already available.”

However, the Governor also stated in his letter, “Congress purposefully provided much of those matching dollars through Community Development Block Grant (CDBG) funds so that local government would not need to match the federal grants.” This strongly suggests that waiting to hold the election in November will not stifle the flow of federal money nor change the facts that the CDBG funds do not need a local match.

At their quarterly Executive Committee meeting this week, the Harris County Republican Party nearly unanimously passed a resolution calling for “Harris County, City of Houston, and Klein ISD governments to schedule their respective bond and/or tax cap repeal elections as part of and on the November General Election date.” Resolution author Clint Moore stated, “Rather than disenfranchise hundreds of thousands of voters, our elected officials should put these tax rate increase elections on the November ballot.  I thought we were beyond choosing these sorts of obscure election dates, but I guess not.”

Voters throughout Harris County may return to the upcoming May 22 Primary runoff election, a probable 9 penny June tax rate ratification election in Klein ISD the weekend of the Republican State Convention, a county bond election in August, and potentially the Mayor’s announcement that he wishes to bust the voter approved property tax rate cap by November general election.  “It is a fundamental truth that our Republic functions better when more people are able to cast their ballots in a Democracy,” concluded Senator Bettencourt.

I watched the Commissioner’s Court meeting when they made the decision to hold the election in August. You can watch it by clicking here and then clicking on Item V, (Part 1 of 2). It was a nightmare for anyone that cares a whit about fiscal policy, small government, transparency, open government or basic fairness to taxpayers. Strong statement since I am a huge fan of Judge Emmett and Commissioners Radack and Morman but that is exactly the way I saw it.

The decision basically boiled down to the best guess of the commissioners as to which date it was most likely to be approved by the voters. Commissioner Rodney Ellis was the only one that wanted it in November but it wasn’t for any of the reasons Bettencourt mentions above, he simply thinks that more of the po’ folks will turn out to approve it. He changed his vote at the urging of Commissioner Radack so that the court would be unanimous when it sent the letter requesting permission to hold the election to Gov. Abbott.

Because there has been NO groundwork laid, there was only an open ended conversation about which group of identity politics driven activists would get their fair share. It was disgusting. Speaker after speaker lined up extolling the virtues of their particular identity group wanting a share of the bond money, the bigger, the better. It was like watching a litter of kittens lining up in front of mama cat. This is what happens when government is driven by identity politics and activism instead of sound fiscal and engineering policy.

Maybe I’m being too hard on the Commissioners but I don’t think so. Disgusting.

Mi amigo Neal Meyer weighs in on the issue over at blogHOUSTON.

Third, considering that an August election would result in a very low voter turnout, there is an issue of legitimacy. If this election results in a turnout of 50,000 voters voting in favor of the bond, while a mere 30,000 vote against, that means only a tiny percentage (like 2-3 percent) of the 2+ million voting electorate of Harris County ends up making the decision that everyone else has to live with. I’ve long gotten tired of this kind of stuff happening, which is why I’ve been pushing for several years now to require voter quorums for bond elections to pass.

Believe it or not, I might actually vote in favor of a bond proposal for flooding, but only after my concerns listed above are addressed. I would like to see a full vetting of the bond proposal, which means delaying the public vote until the November 2018 election. That would give the electorate another 2 1/2 months to analyze and debate the proposal. The November 2018 election will also result in a higher turnout, which will give the bond vote stronger legitimacy.

There is no need to hurry, so why not wait?

Neal is exactly right. Why not have a full vetting before voting on such a nebulous proposition? Note that he doesn’t sound like an angry voter, just a frustrated one that knows full well there will not be a full vetting and most of the bond is simply going to be guess work on the high side of the equation.

There is no need to have the bond election in August. The only reason to do so is a political calculation on the part of the Republicans on the court. Sad.

So, is this my last look at the disastrous 2016 election results for Paul Simpson’s Harris County Republican Party before offering promised solutions? Maybe. We’ll see.

As I said in the previous look at the HCRP’s disastrous results, I don’t think that Republicans in Harris County understand how bad it really, truly was. I still see people saying that it’s okay, we’ll do better in 2018, it’s all Trump’s fault, yada yada, yada. The level of delusion is fairly amazing if you ask me. And no, I do not think that Paul Simpson is 100{997ab4c1e65fa660c64e6dfea23d436a73c89d6254ad3ae72f887cf583448986} at fault for the disaster although it is a given that he must bear the brunt of the blame. It is very disappointing that he is, publicly at least, trying to shift the blame and not taking any responsibility for it. Oh well.

In this data exercise, we are going to look at the county from a State Representative District and County Commissioner Precinct by State Rep straight party voting perspective. That’s a long sentence to say that the charts below should be self explanatory but if not, think about your State Rep and your County Commissioner and how they affected (or didn’t affect) the 2016 general election in Harris County.

Lots of data, not much commentary because I really, truly want other people to chime in via comments or email. I understand that many people don’t want to put their thoughts out publicly, so email is okay. And as usual, I won’t make your email public unless I ask you. And I promise that I will have plenty of commentary and specific suggestions in the very near future. For now, I prefer to continue thinking about it and talking to various HCRP players.

When you look at the data, remember that redistricting happened between the 2010 and 2012 elections. I’ve chosen to use the party affiliation and name for incumbents entering the 2016 election. Let’s get started.

Wow, you’d think that the R’s would have wiped out the D’s by looking at that table. Let’s look at the turnout percentages:

Interesting. The R district vs D district turnout is very close to total ballots cast, again indicating that Republicans should have cleaned the Democrat’s clock. And wow, Sarah Davis’ district must rock for Republicans! Right?

Now that you’ve seen the total ballots and turnout percentage, let’s take a deeper dive into straight ticket voting. Because, you know, that was Paul Simpson’s campaign theme in a nutshell – Harris County Works! Vote straight Republican and go home! This table shows each State Rep district sorted by the straight ticket Republican vote for each district: 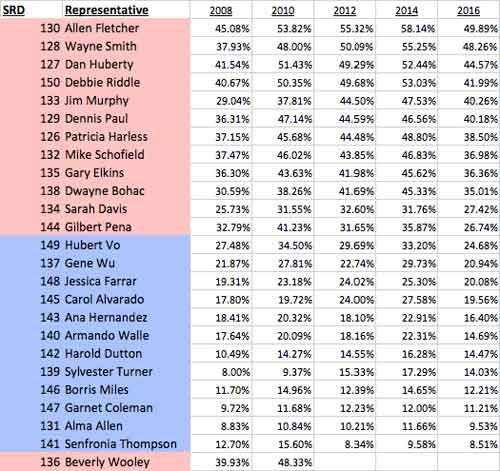 Huh. The districts are staring to shift a bit. Now let’s show a table sorted by the net (R straight votes minus D straight votes) straight ticket vote between Republicans and Democrats:

Oops. Looks like the high turnout in a more than a couple of R State Rep district didn’t translate into a straight ticket voting for R’s onslaught.

Now let’s look at the State Rep districts in terms of ‘Independent’ or non-straight ticket voting: 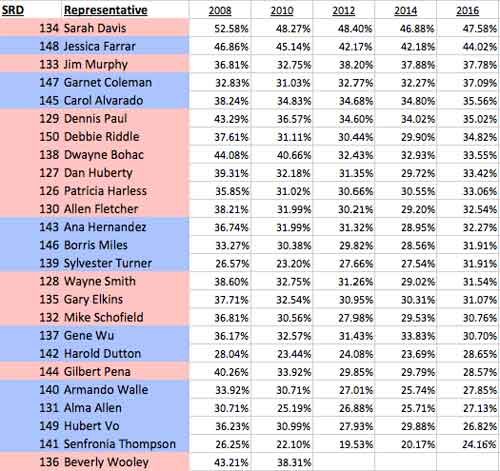 There is a whole lot of strategy packed into that table if you choose to see it. But if you are a consultant from Austin advising Paul Simpson, you probably don’t.

I thought it might be interesting to take another look at the voting by County Commissioner Precinct, this time in terms of State Rep districts.

Once again, a whole bunch of strategy outlined in those tables. But hey, I’m just a blogger! What do I know?

And of course, we have to know how the County Commissioner precincts did in terms of net difference between R’s and D’s in straight ticket voting. Because, you know, we have to know! 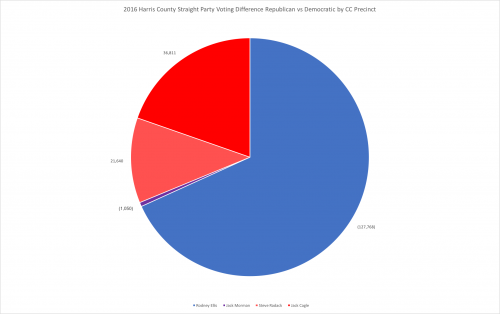 And as we saw earlier, Harris County County Commissioner Precinct 1 swallows up the other three in favor of Democrats.

Okay, that’s enough for today. Like I said, I’ll keep thinking about it but I’ve dropped enough hints and clues here for anyone that is paying attention to know what I’m going to say.