Now that Hurricane Harvey is departing the area many will wonder what could have been done to make the devastation less severe. In times of crisis blame is easy. Blame feels good – it’s an emotional outlet. Blame also is a defense mechanism as old as The Fall in Genesis – it casts responsibility on others. But just like in Genesis blame doesn’t solve problems or resolve issues.

What’s important is learning lessons from the disaster so that when the next crisis arises the preparation is better and impact lessened.  To that end, criticism of the mayor for not ordering an evacuation needs to stop. Whether an evacuation was or was not ordered would not have impacted the flooding. Blaming the mayor for not calling an evacuation is not productive. He made the right call. We were never in danger from wind or storm surge. That’s what you evacuate to escape.

Not evacuating also had benefits that aren’t readily visible for the news so don’t get reported, but do have a significant impact on reducing human suffering. The media doesn’t see the 2:00 AM property walks that discover debris filled drains and gutters that are cleared to restore drainage and in the process saves vehicles and homes from sheet flooding. Homeowners who stayed battled sheet flooding intrusions and were able to keep flooding below the power outlets significantly reducing the amount of repairs needed. None of those stories gets picked up, and the picture presented is incomplete and one sided.

There will be a time to demand accountability going forward. Now is not that time. When that time comes it’s important to focus on the future and what lessons we should learn from the disaster. 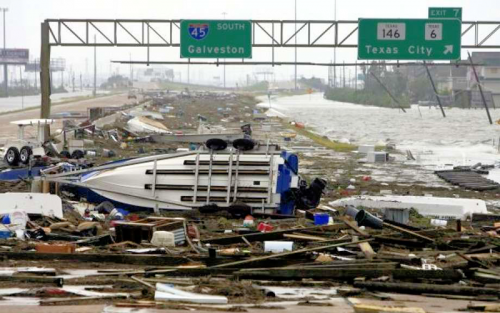 Sounds like a solid plan, one that would protect several hundred thousand homes and people from those deadly and destructive storm surges.  But the Ike Dike was met with immediate opposition from environmentalists.

The econuts warned that the floodgates would interfere with the migration of sea life.  What a crock!  Those gates would only be closed upon the approach of a hurricane.  They would be open at all other times, thus allowing that precious sea life to migrate into the polluted waters of the Houston ship channel.  The econuts also opposed extension of the sea wall.  Instead, they proposed building up the sand dunes as a natural barrier against any storm surge.  Yeah right, that’ll work.

The environmentalists also say that developers are to blame for building homes and businesses within the storm surge areas.  Of course they are right.  But that’s no consolation for the people now living in the hundreds of thousands homes that are now sitting where they should never have been built.

The next opposition came from the bean counters.  They said that the estimated $5 billion it would cost to build the Ike Dike was unattainable.  Never mind that Hurricane Ike did $24 billion of property damage even though it came ashore in a far less populated area than Houston and Galveston.  $5 billion is too much?  Never mind that the feds spent $14.5 billion just within the city of on New Orleans to protect its citizens from the ravages of storm surge-induced flooding.

What did New Orleans have that Houston and Galveston did not have?  After Hurricane Ike we did not have the pictures New Orleans had showing heart-wrenching images of 16,000 poor souls trapped in the Super Dome under unimaginable inhumane conditions.

$5 billion is too much?  Along came the educated idiots at Rice University’s Baker Institute to throw a wrench into the Ike Dike plan.  They had the solution to the high cost of the proposed Ike Dike.  They recommended scrapping Merrell’s floodgates and sea wall extension in favor of one floodgate across the Houston ship channel.  That would protect Houston’s multibillion dollar petro-chemical complex.   But what about the homes and businesses siting in the path of a hurricane storm surge?

I am not an engineer or hydrologist.  Common sense tells me that the water from the storm surge won’t just stop once it reaches the ship channel floodgate.  It has to go somewhere.  It probably cannot recede.  Most likely the water will spread east and west, thereby flooding thousands of homes that might otherwise have been spared.

There has been a concerted effort in support of the Ike Dike on the part of public officials and prominent citizens from the cities within the Houston-Galveston area.  But here it is nine years after Hurricane Ike and no Ike Dike is in sight.  And by now the cost has probably tripled.

Will the Houston-Galveston area ever get the Ike Dike?  Yes, but I fear it won’t be until after the area has taken a direct hit from a category 3 hurricane and the catastrophic loss of lives and property left in its wake.