Commissioner’s Court Precinct Three is an open seat for the first time in 32 years because Commissioner Radack is retiring.  Tom Ramsey was kind enough to spend approximately an hour and a half discussing his vision for Precinct Three.  He indicated his priorities are infrastructure, safe neighborhoods, and taxes.  While these are clearly important to him, the biggest take away from the interview was something that wasn’t an overt focus of his campaign pitch, but something that kept coming up over and over again in the interview – the proposition that the government should not pick winners and losers, and that social justice requires treating all people equally regardless of whether they are in River Oaks or packed into low income apartments.

From a track record and endorsement standpoint, while Mayor of Spring Valley, he reduced the tax rate by 21%, invested $38 million on infrastructure and flood control and led the city to being named the safest in Harris County according to FBI statistics. He has many endorsements, some of the most prominent coming from Houston Area Realtors, Houston Contractors Association, Baptist Ministers Association (largest and oldest Black Ministers Organization), Houston Police Officers Union, Harris County Deputies, Houston Building Owners and Managers Association, Houston Realty Business Coalition, American Council of Engineering Companies, Commissioners Radack and Cagle, Constables Herman and Heap, the C Club, and Texas Right to Life.

The interview consisted of the topics he wanted to discuss, followed by discussion about how can he be effective as a minority member on the Commissioner’s Court, flooding and the Ike Dike, criminal justice issues, and the Hospital District. As noted above, the proposition that the government should not pick winners and losers kept arising throughout the interview, and should bring comfort to everyone since it appears he will represent everyone without favoritism, and place the traditionally underserved on an equal playing field with the wealthy and politically connected.

While we didn’t discuss Covid per se, he did note that the current business environment needs to change to become more business friendly.  He discussed his meeting with local businesses, such as Daikin, and noted that businesses are starting to recover.  He said that Daikin is ready to hire for 1,000 positions.  He said he trusts businesses and school districts to know the best way to open up in a manner that will protect their patrons/students.

He also noted the small business community has been devastated, and expressed his opinion that an overall business friendly environment was needed to help the economy recover.  This was one area where the overall package of his concerns came into play. The government should be doing more to address flooding and infrastructure concerns to remove impediments to conducting business.  Low taxes are needed so businesses, especially small businesses, are able to keep more of what they earn. Neighborhoods need to be safe so people feel comfortable going to the businesses, and feel safe going to businesses later in the operating hours.

So how can he be an effective member on Commissioner’s Court as a member of the minority party with a majority who does not seem to be interested in trying to work with the minority?  He believes the biggest thing the Republican members of Commissioner’s Court can do is to highlight issues and how the majority is harming the County.  As examples he highlighted the steps taken to allow the County to raid revenue from the Harris County Toll Road Authority.  This is an overt raid on HCTRA revenue that will be diverted for the democrat commissioner’s pet projects rather than allowing for tolls to drop, or improvements to the toll road system to occur without having to increase tolls. He noted violent crime is up 36% and homicides up 41% in Harris County and Commissioner Adrian Garcia actually proposed a study to do away with the Constable program which provides critical protection for residents.

He also pointed out that exposing issues can lead to action rather than stopping bad actions, pointing out that 181 projects with $4.9 billion in funding available are on hold because four mitigation banks are needed, but only one is ready.  This is something that the Commissioner’s Court could immediately address to pump up economic activity, but they are choosing not to do so.  While a minority member cannot force policy change, he noted that exposing this issue would make action more likely simply because of the optics, and that’s one way to be effective in the minority.

We have had a terrible hurricane season, and activity is still ongoing.  While we were lucky with Laura, and while Beta never got organized it still dumped a foot of rain in portions of precinct three.  Hurricane Ike devastated the area in 2008, and we are still no closer to having a mitigation plan in place than we were 12 years ago.  This is despite the County being well positioned to fund and enact a mitigation plan of some nature.  Again, not picking winners and losers came up, and allowing mayors from cities other than Houston have their say were important.  He believes in the end the several cities need to collaborate and come up with a consensus plan, and then put that plan before the voters.  He also noted the possibility of having an entity other than the County handle the issue since the project will impact multiple counties. 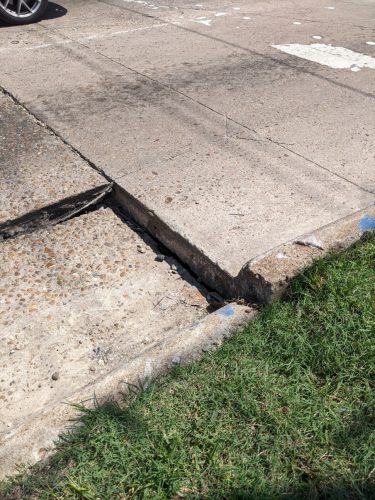 (Road collapse – note: When reported to Councilman Pollard’s office over the weekend it was repaired within 48 hours.)

Our conversation on criminal justice and social justice merged into one topic, and was sprawling.  The conversation could be summed up in the premise that everyone needs to be treated equally.  He believes that the roads in River Oaks should be of the same quality and same state of repair as the roads in the poorer sections of Houston City Council District J and F.

This holds true with flooding issues also.  When flood remediation occurs everyone should be treated equally, and the property value of the impacted areas, both in terms of preexisting damage and in terms of future mitigation, should not be a factor in determining who receives help and who receives future protection. Large sums have been made available, but not yet spent.  He believes that the vast amounts available for this matter needs to be allocated and relief rushed to those in need.

Regarding the hot button issue of policing reform he noted that HPD does not have enough resources, and even if they did policing required all local agencies working together to address known criminal activity.  To this end, he proposes creating a task force that will involve all branches of law enforcement in the County to both share information as well as have interagency cooperation on apprehending known criminals.  He drew a distinction between misdemeanor and felony criminal activity arose with the focus on stopping felony activity first as that’s the major threat to community safety.

Overall he struck me as both genuinely concerned about the welfare of the community regardless of political affiliation and affluence, and seemed sincere in wanting to have the County serve as a vehicle to help coordinate efforts to foster closer law enforcement action to help apprehend the known felony criminals.  He also seemed to be knowledgeable and tenacious enough to expose Commissioner Court’s misdeeds to sunlight and that would make him an effective Commissioner despite his status in the minority.

Sounds like a solid plan, one that would protect several hundred thousand homes and people from those deadly and destructive storm surges.  But the Ike Dike was met with immediate opposition from environmentalists.

The econuts warned that the floodgates would interfere with the migration of sea life.  What a crock!  Those gates would only be closed upon the approach of a hurricane.  They would be open at all other times, thus allowing that precious sea life to migrate into the polluted waters of the Houston ship channel.  The econuts also opposed extension of the sea wall.  Instead, they proposed building up the sand dunes as a natural barrier against any storm surge.  Yeah right, that’ll work.

The environmentalists also say that developers are to blame for building homes and businesses within the storm surge areas.  Of course they are right.  But that’s no consolation for the people now living in the hundreds of thousands homes that are now sitting where they should never have been built.

The next opposition came from the bean counters.  They said that the estimated $5 billion it would cost to build the Ike Dike was unattainable.  Never mind that Hurricane Ike did $24 billion of property damage even though it came ashore in a far less populated area than Houston and Galveston.  $5 billion is too much?  Never mind that the feds spent $14.5 billion just within the city of on New Orleans to protect its citizens from the ravages of storm surge-induced flooding.

What did New Orleans have that Houston and Galveston did not have?  After Hurricane Ike we did not have the pictures New Orleans had showing heart-wrenching images of 16,000 poor souls trapped in the Super Dome under unimaginable inhumane conditions.

$5 billion is too much?  Along came the educated idiots at Rice University’s Baker Institute to throw a wrench into the Ike Dike plan.  They had the solution to the high cost of the proposed Ike Dike.  They recommended scrapping Merrell’s floodgates and sea wall extension in favor of one floodgate across the Houston ship channel.  That would protect Houston’s multibillion dollar petro-chemical complex.   But what about the homes and businesses siting in the path of a hurricane storm surge?

I am not an engineer or hydrologist.  Common sense tells me that the water from the storm surge won’t just stop once it reaches the ship channel floodgate.  It has to go somewhere.  It probably cannot recede.  Most likely the water will spread east and west, thereby flooding thousands of homes that might otherwise have been spared.

There has been a concerted effort in support of the Ike Dike on the part of public officials and prominent citizens from the cities within the Houston-Galveston area.  But here it is nine years after Hurricane Ike and no Ike Dike is in sight.  And by now the cost has probably tripled.

Will the Houston-Galveston area ever get the Ike Dike?  Yes, but I fear it won’t be until after the area has taken a direct hit from a category 3 hurricane and the catastrophic loss of lives and property left in its wake.