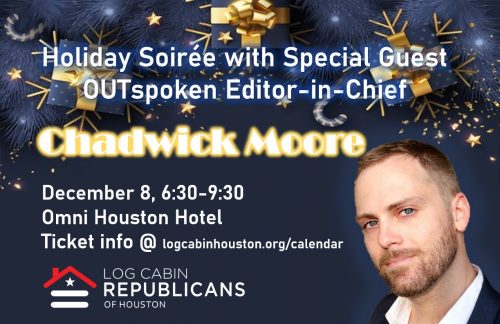 This is a press release by the Log Cabin Republicans.

The Log Cabin Republicans of Houston are pleased to host an evening with dynamic conservative activist, Chadwick Moore, at their holiday gathering December 8, 2021. Chadwick is the editor-in-chief of OUTspoken, a Spectator columnist and contributing editor, has appeared on Fox News, NPR and other news outlets, and is a popular speaker nationally. As a former Socialist he provides a fresh vision of modern conservativism in America. Tickets for this event are available at www.LogCabinHouston.org/calendar.

Clearly, some people have lost their soul.

Question: What on earth would possess someone to host a “party”, especially at Christmas time, at a place that rips little human beings apart?

Answer: Nothing on earth but surely something possesses them.

In case you missed it, this is a repeat event, so one must presume that it was a smashing success last year.

The Houston Coalition for Life is holding a candlelight prayer vigil will be held outside the gates of this hellish place, so that the “party goers” will have one last reminder of what they are celebrating. Please join them and bring a toy for the children of mothers assisted by local crisis pregnancy centers.

From the post about this ghastly party last year:

providing euthanasia for the unborn of the unwashed ghettos and barrios has its grand demographic benefits.  Fewer welfare recipients equates to more funding for their husbands’ Solyndra projects.

Dark forces of evil surround these women and their sponsors. I pray that as these “party goers” sip their champagne, they hear the screams and cries of the little human beings that are being torn apart through their efforts.