Kudos to The Leader News for publishing a story on the Bethel United Church of Christ, one of four Houston-area churches performing same sex weddings. In their article “Local church embraces marrying local LGBT couples” The Leader News performed a valuable community service by educating their readership that Bethel United Church of Christ is one of four affiliates in Houston performing same-sex weddings.

“There are 14 UCC affiliates in Houston, and the beauty of our denomination is that we are locally governed,” Teddy Kissell, acting interim pastor, said. “We reflect the community. There are four of us in Houston performing same sex weddings. We four are what we call ‘open and affirming’ congregations. We try to personalize each wedding – a wedding should be personal – but keep the worship in it too.”

So exactly how “open and affirming” is the community to a point of view that Bethel United Church of Christ is not an “of Christ” church? And what does “the community” worship?

The Leader News printed this Letter to the Editor from Liz Theiss in which she highlighted Goal 26 in the 1958 book “The Naked Communist” and opined that the recent SCOTUS ruling will be a watershed moment for true Christian churches who may be litigated right out of existence:

“The story covering the LGBT “marriage” by the false “church” Bethel United Church of Christ reveals what Vladimir Lenin described as “useful idiots” back in the 1930’s. This not of Christ “church” is actually a handmaiden of communism. A 1958 book written by a retired FBI agent, The Naked Communist lists the very explicit goals for tearing down the United States from within. Goal #26 states: “Present Homo-sexuality, degeneracy, and promiscuity as “normal, natural, healthy.”

Obviously, this “church” is more acquainted with communism than Christ and the Bible. True churches will find themselves eliminated under communist authoritarian regimes as true Christians will be persecuted. Currently, the SCOTUS ruling will be the watershed moment for true Christian churches who may be litigated right out of existence or denied tax-free status. A Christian couple in Oregon has been fined $135,000 for refusing to bake a cake for a lesbian couple for their wedding who were “offended.” In Kentucky, a County clerk has refused to perform a gay marriage and is willing to go to jail for his beliefs. These are the true Christians. As Reverend Franklin Graham stated after the ruling: “America’s not going to like what’s at the end of this rainbow.”

Here’s how two “open and affirming” community members felt about The Leader News!!

For publishing a letter highlighting a 1958 book on Communism and an opinion that militant gay rights activists wish to identify business owners conducting their business in accordance with their First Amendment religious beliefs and litigate them right out of existence, The Leader News was chastised for disrespecting the worship of—Vladimir Lenin! 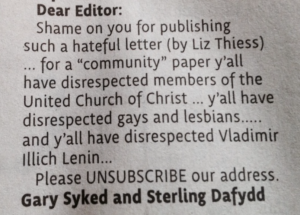 Hmm—how will the free market capitalist supporters in Houston’s gay and lesbian community appreciate being lumped in with other Lenin worshipers of Marxism and its tenet belief in forced confiscation of private property?

Feel free to post your thoughts in the comments section but before you do, here’s one of my favorite (snarky!) scenes from Dr. Zhivago where Yuri learns the Holy Cross Hospital has been “reformed” and his house appropriated to accommodate living arrangements for twelve more families: