The contest for Texas House District 135 is in full swing, with recent campaign finance reports showing the race as one of the top targeted races in the state. Incumbent Democrat State Representative Jon Rosenthal reported raising $206,564.23 during the most recent reporting period, while Republican challenger Justin Ray brought in $418,811.43.

While many Democrats running in suburban areas are running campaigns featuring a centrist message and are distancing themselves from the extreme left, Rosenthal is a notable exception. Rosenthal describes himself publicly as a proud “progressive” who “isn’t trying to walk a tightrope.” This was evidenced by Rosenthal’s rating as Harris County’s most liberal state representative in Rice University Professor Mark Jones’ analysis of the 2019 legislative session. As part of his “bold progressive” campaign, Rosenthal has embraced fringe elements of the far left that hold the values shared by most residents of District 135 in utter contempt.

The American Humanist Association and its affiliated entities are militant atheist groups that seek to remove any reference to God or Christianity from the public square. One of the key initiatives of the American Humanist Association is encouraging people to boycott the Pledge of Allegiance and the organization has a stated goal of “dismantling Christian privilege.”

Rosenthal’s embrace of this endorsement should come as no surprise based on his own past comments mocking Christians. As I have noted previously on this blog, in an interview on the “Trans Advocate” podcast, Rosenthal made several comments mocking Christians, the virgin birth, and the sacrament of communion. At one point in the interview, Rosenthal called Christian conservatives a “Christian Taliban,” joked that advocates of abstinence education are “these same religious people that will tell you there’s an exception to that rule, right, you can be abstinent and still get pregnant,” and stated “As a non-practicing agnostic, I don’t think I should be, let’s say, required to take communion walking into the Texas legislature. And it’s not that I have anything against eating crackers, but I think those crackers are generally not very tasty.”

The American Humanist Association is also a supporter of the defunding the police, having posted the following on its Facebook page: 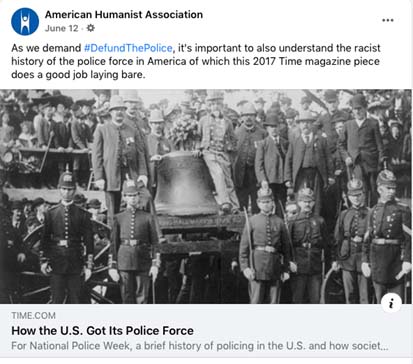 The Freethought Equality Fund PAC isn’t the only anti-police organization whose support Rosenthal has sought and embraced. Over the last several weeks, Rosenthal has partnered with the Bernie Sanders-aligned group Our Revolution for regular phone banks supporting his campaign. Our Revolution is one of the most prominent national groups leading the charge to defund the police. In addition to being endorsed by Our Revolution, Rosenthal was a featured speaker at their “Organize to Win” rally earlier this year.