Regular readers of Big Jolly Politics may be familiar with State Representative Jon Rosenthal, the first-term Democratic State Representative who represents Texas House District 135 in Northwest Harris County. Last January, I wrote a post announcing my candidacy for State Representative against Rosenthal, highlighting the far-left platform he ran on during his 2018 campaign. David was also kind enough to highlight a press release my campaign issued after Rep. Rosenthal played the victim card in fundraising solicitations he sent out after Speaker Bonnen made some unkind remarks about him, for which Bonnen apologized. Rosenthal still has not apologized for remarks he has made about Christians and conservatives that were far more insulting and vulgar than the crude joke Speaker Bonnen made about Rosenthal.

I ultimately opted against running Representative Rosenthal and instead threw my support behind another Republican, former Jersey Village Mayor Justin Ray, in order to promote Republican unity and ensure that resources were focused on the general election in order to maximize our ability to flip this seat back.

Representative Rosenthal ran for office as a far-left progressive and has governed as one. This is why he has been embraced by the most extreme elements of the Democratic Party, who are energized about his re-election campaign and are working hard to return him to the Texas House.

Earlier this year, Representative Rosenthal was a featured speaker at a Houston-area rally for the socialist advocacy organization Our Revolution. This picture pretty much sums up Rosenthal’s legislative agenda. 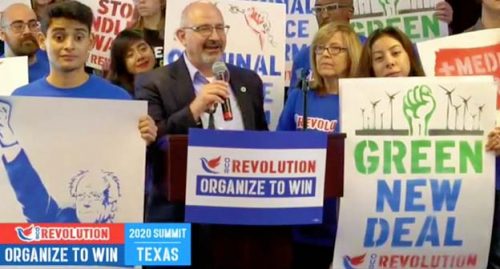 The Harris County chapter of Our Revolution, which takes credit for helping elect Rosenthal to the Texas House, recently endorsed one of Sheila Jackson-Lee’s primary challengers because she is insufficiently liberal in their eyes. They also proudly endorsed Rosenthal for re-election, touting him as a “proven champion for true progressive values.”

House District 135 is a historically Republican district that President Trump carried by two points in 2016. Governor Abbott carried the district by 4 points in 2018, despite a strong showing by Beto O’Rourke. Representative Rosenthal’s far-left views are simply not representative of this district.

While the race for District 135 represents a prime opportunity to oust Harris County’s most liberal state representative, the district will not flip by itself.

The ongoing situation with COVID-19 has certainly changed the way campaigns are operating, but it has also provided significant opportunities for volunteers to help from the comfort of their own homes. Justin Ray’s campaign to reclaim District 135 is gearing up, but it will require a strong team effort in order to be successful.

There are plenty of ways you can help Justin from home, even if you don’t live in District 135. I encourage you to reach out to Justin’s campaign by clicking this link and get involved with his volunteer efforts.