This article marks the fourth installment of a multi-part series on the prosecution of The Woodlands RUD voters. This series is meant to educate the public on the complexities of election administration for all who are associated with the process, including County Election Administrators, Special Districts and their legal counsel, and specifically the voters of Texas.

Today’s chapter reveals Mike Page’s subsequent discovery of two RUD voters (after finding none), Page’s explanation of the RUD, Adrian’s receipt of the RUD map & his discovery of 11 more voters in the road utility district and an earlier story of nine people in the Tarrant County area who registered to vote at a DEA office.

“the boundaries and taxing jurisdiction of the RUD include only commercial and retail properties that were included/ added by petition of THE landowner….since the last two houses were torn down for construction of the Waterway West under Grogan’s Mill Road, there have been no residents or voters in the RUD.”

This is a copy of The Woodlands Road Utility District map. The map was obtained by Adrian in February 2010. ( The map is the latest version reconfirmed by Julie Kime of Schwartz, Page & Harding, LLC  in 2012) It is shown here as a visual representation of a complex element of our electoral process, meaning, what are the boundaries of the District? 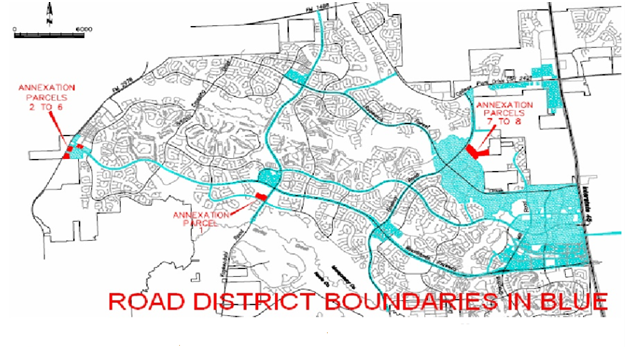 Here is a copy of the March 8, 2010 email where, in his official reply to an open records request, Mike Page explains there have been no residents or voters in the RUD 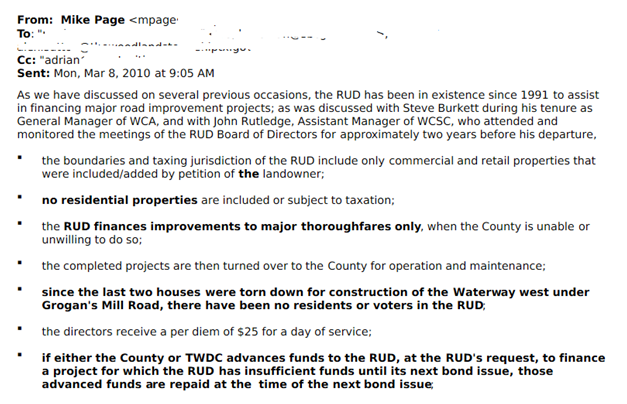 “requested a complete canvass of the boundaries of the RUD to be made to confirm there are no registered voters in the district. Several days later, I was advised that only one parcel of land in the District was shown on the MCAD records as not being restricted to commercial or retail use; after further inquiry, we found that this property is owned by XXXXXXXX …and who received specific deed restriction permission to construct and maintain a residence that had been   constructed on this property..that it is occupied by the XXXXXXX’s as a residence and that they are registered to vote in Montgomery County…so we do indeed have two voters in the District and the election is on…”

Personally identifying information has been redacted as have the identities of the property owners.

Here is a copy of that official reply, in response to an open records request, from Page to Heath: 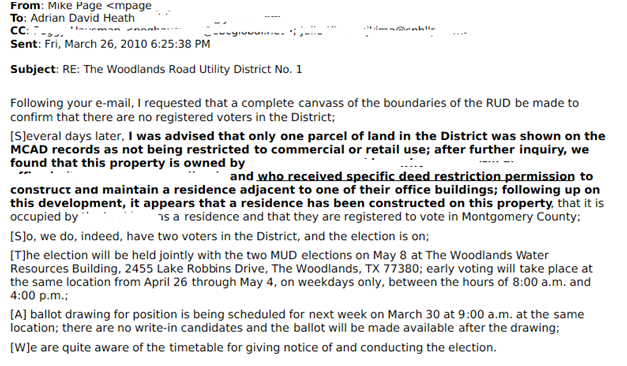 Keep in mind Mike Page previously told Adrian the boundaries and taxing jurisdiction of the RUD include only commercial & retail properties and no residential properties are included or subject to taxation.

Questions? I expect readers of this article have a few.

Did you ever read this story on Texas Watchdog? Former Texas State Representative Vicki Truitt, as reported by the Texas Tribune, had a tough primary in the HD-98 race back in 2010.

Did any of these DEA agents vote in the District 98 election? If yes, were they prosecuted by the State of Texas? If not, why is  Texas Assistant Attorney General  David Glickler, through the Office of Texas Attorney General Greg Abbott, prosecuting The Woodlands RUD 7?

And more importantly, why is Texas Attorney General Greg Abbott prosecuting his own co-defendant in the case against the Greater Houston Partnership?