The Center for Medical Progress statement along with a copy of the dismissal can be found here.

Kudos to Judge Bull for following the law and dismissing the indictment.

Bad news – the indictment was dismissed for technical reasons, specifically “[t]he indictment’s failure [to address a technical legal point] renders is void. A void indictment confers no jurisdiction to this court.” A very technically sound dismissal, but one that is easily cured.

This leaves the district attorney’s office two options: 1) let the case go 2) cure the technical defect and indict again without the technical error. Make no mistake, this is gut check time for Devon Anderson. Either course will have political impact and sway votes come November leaving the issue simply a matter of what does she believe should happen.

To indict or not to indict that is the question….

A grand jury led by Patricia Pollard indicted Alfred Dewayne Brown. In June, Brown was released from Texas death row after the Texas Court of Criminal Appeals reversed his conviction because of prosecutorial misconduct and, specifically, the failure of Harris County prosecutors to disclose exculpatory material to the defense. The case was then dismissed by Devon Anderson, current Harris County District Attorney.

Pollard’s record and antics are well-documented and notorious at this point; but, I wanted to provide a recap for new readers. In 2003, Devon’s late husband, Mike, as judge of the 262nd District Court, selected Patricia Pollard as foreman of his grand jury. At last count, Pollard has been placed on at least six grand juries in Harris County where she has served as foreman on a minimum of five occasions.

After her 2005 service, Pollard wrote a letter to Governor Rick Perry and the Texas Legislature to report a “widespread, massive and repeated” Medicaid fraud in Texas. On January 18, 2006, Pollard was asked to testify before the Texas Senate Finance Committee. Under questioning, Pollard admitted that she possessed no evidence to substantiate her allegation.

Pollard then donated $5,000 to Texans for Rick Perry and was appointed to a six-year term on the Texas State University System Board of Regents. Devon conducted this swearing in ceremony and Pollard donated to Devon’s unsuccessful judicial reelection effort. So, in 2011, when it came time to take back the courthouse, the Andersons went to their go to gal, Pollard. Following the 185th tragedy, Susan Brown led the effort to seal all Harris County grand jury lists.

Needless to say, Pollard is the poster child for the grand jury reform signed by Governor Abbott, which eliminates the pick-a-pal grand jury selection system.

Earlier this year, Houston Chronicle metro columnist Lisa Falkenberg won a Pulitzer Prize for her stories on Alfred Dewayne Brown. Falkenberg wrote extensively about Brown and the circumstances surrounding his prosecution. While Falkenberg touched on the faulty criminal justice system, especially in Harris County, she completely ignored the fact that Pollard, a habitual grand juror in the pick a pal system, was behind Brown’s capital murder indictment. I wrote about the Pollard plague on August 15, 2014; yet, Pollard went unnoticed in Falkenberg’s reporting.

My primary criticism of Falkenberg’s stories: they largely ignore the criminal connections and jiggery-pokery that set these injustices in motion. Most of Falkenberg’s stories focused on the grand jury that was used to interrogate Ericka Dockery, Brown’s girlfriend at the time of the murders. The foreman of that grand jury was a Houston Police Department officer, which is very inappropriate and a conflict of interest considering that the offense involved the murder of a police officer from the same department. This would be kind of like someone from the Houston Chronicle leading the Pulitzer Prize committee that presented Falkenberg with this year’s award. Not to say that Falkenberg was undeserving of the award – it just appears improper.

I believe that Falkenberg’s focus is misplaced. Yes, the pick-a-pal grand jury system is wrong. And, the prosecutors in Brown’s case were wrong to not provide the defense with exculpatory evidence. Is Brown innocent of this crime? We may never know. The problem is larger than this singular event. The Brown case is an example of the systemic corruption within the system. The elimination of the pick-a-pal system will not stop these injustices.

Devon and Mike Anderson campaigned on bringing the Harris County District Attorney’s office back to the old days. The days when rape kits went untested and innocent men like Ricardo Rachell were convicted and sent to prison for crimes they did not commit. The most common reasoning around that office is, “This is the way we have always done it.” Well, I do not believe that logic is sufficient, especially when we are talking about liberty and justice.

Judge Gist found that Kelly Siegler, the Temple trial prosecutor, failed to disclose exculpatory material to the defense – same as the Brown case. The Texas Court of Criminal Appeals is likely to uphold Judge Gist’s findings, which would send the case back to Devon Anderson.

Devon promised the people of Harris County that she would personally prosecute all defendants accused of killing police officers. What about us regular folks? Are we second class victims? So far, the only case personally prosecuted by Devon was a capital murder on videotape.

The Temple case could be an Anderson v. Siegler showdown. What will the people who worked so hard to get Mike and Devon into the DA position do if Anderson dismisses the David Temple case?

So, why hasn’t Falkenberg broadened the scope of her reporting to include the reported injustices such as Antonio Williams and Linda Carty? One answer came today in a Falkenberg tweet. 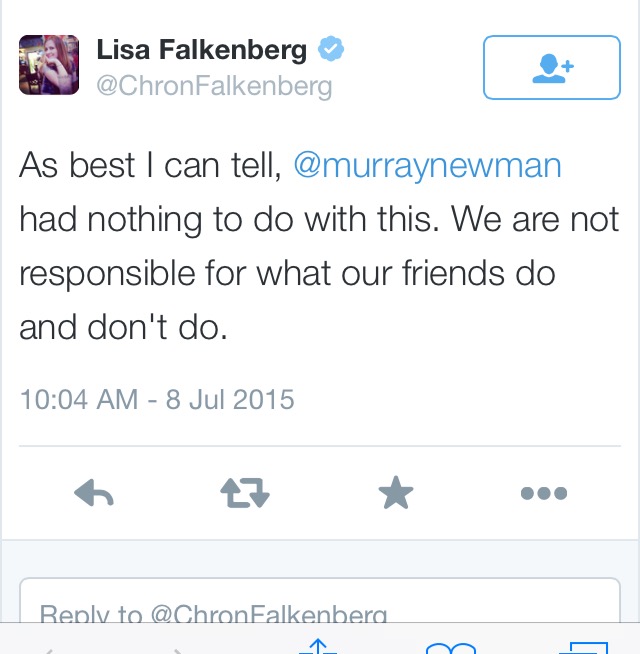 Questions remain. Why did Susan Brown give $2,925 to Devon Anderson [now District Attorney] and Brock Thomas [now judge of the 338th District Court]? Will the Siegler gang move away from Devon and support a new candidate for 2016? What will prosecutors do without the rubber stamp pick-a-pal grand juries? Will Pollard still find her way to the grand jury room?