Last Sunday, reporter Jayme Fraser’s story titled “Fort Bend EMS asks for $3 million budget increase” appeared in both the paper and online edition of the Houston Chronicle. The article centered on Fort Bend County’s EMS response times and a proposed 32{997ab4c1e65fa660c64e6dfea23d436a73c89d6254ad3ae72f887cf583448986} increase to the Fort Bend EMS budget at a time when the area covered is expected to reduce in size by 15-20 percent. Fort Bend County Commissioner Andy Meyers was reported to be the most skeptical of the size of the increase but County Judge Hebert was reported as championing the $3 million dollar increase requested by new EMS Director Graig Temple.

What caught the attention of a few Fort Bend residents was the version of the online story which has since been scrubbed of the sentence highlighted in yellow.

Here’s how the story first appeared in the paper and online edition of the Chronicle (click on the photo to enlarge):

“Some are skeptical of such an excessive increase, but County Judge Bob Hebert said he will champion Temple’s request.

When Hebert himself had a medical emergency recently, he said he waited more than 30 minutes for an ambulance to reach his home.’

You’d think one of the drive-bys would report on the Fort Bend County Judge waiting 30 minutes for an ambulance to arrive at his home for an emergency—inquiring minds wanted to know.

Here’s how it played out on social media (click on the photo to enlarge): 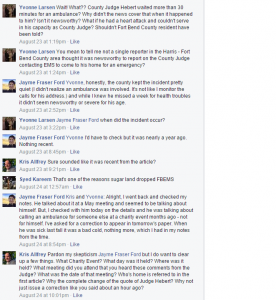 Was the County Judge exaggerating about that 30 minute wait for EMS to arrive at his house? Would answers validating the Judge’s assertion of a 30 minute wait time for an ambulance at his home be forthcoming?

A complete change of Judge Hebert’s quote is now on the web version of the Houston Chronicle (click on the photo to enlarge):

“Hebert first realized the county “might have a response problem” at a charity event a few months ago when it took about 30 minutes for an ambulance to arrive to treat a guest who had fainted nearby.

Instead of accepting responsibility for his attempted deception in putting forth a false scenario to Chronicle readers (possibly intended to draw support for the budget increase and gin up turnout for the upcoming ESD elections– gasp!) it looks like the Judge went straight to the top for a correction—a complete rewrite which has one county resident wondering if the Judge is still telling the truth to the community (click on the photo to enlarge):

With the rollout of Sugar Land’s new EMS units and upcoming ESD elections in the County that together will shrink the geographic coverage of Fort Bend EMS, Commissioner Meyers is right to be skeptical of a proposed 32{997ab4c1e65fa660c64e6dfea23d436a73c89d6254ad3ae72f887cf583448986} increase in the EMS budget. Public meetings on the proposed Fort Bend County budget are expected to be held in September.

Show up and tell Judge “Bob” Boss Hogg to rethink his campaign slogan.