America is a land of immigrants ….. both legal and illegal 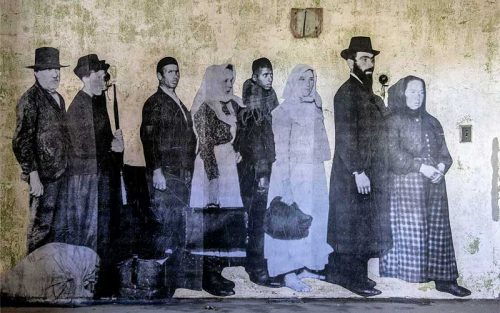 The inscription on the Statue of Liberty in part reads: “Give me your tired, your poor, your huddled masses yearning to breathe free.”

In 1939, Cuba, Canada and the United states all turned back 900 Jewish refugees on board the German ship MS St. Louis. The ship’s captain then managed to find several European countries to accept the refugees. Unfortunately, some of those countries were subsequently overrun by the German Wehrmacht, and it is estimated that approximately a quarter of the 900 refugees died in Nazi death camps

My father, mother and I came to the United States as Jewish refugees from Nazi Germany in 1936. We were among the fortunate few who had a distant American relative who agreed to sponsor us and be financially responsible for us. God only know how many Jews perished in the Nazi gas chambers because they were refused entry into the U.S.

My father had a management position in Braunschweig with Karstadt, a big German department store chain. He was also the shoe buyer for the whole chain. I believe it was in 1934 that Nazi authorities ordered Karstadt to fire all Jews, including my father. We moved to Magdeburg where my father obtained a job as a shoe salesman. Unlike many German Jews, my father saw the handwriting on the wall and sought a new life for us in America.

America is a land of Immigrants. I too am an immigrant. I am very lucky and I love America with all my heart and soul!

America is also a land of both legal and illegal immigrants. Immigration authorities and the media keep throwing around eleven million as the number of illegals in this country. I believe the number is closer to 20 million.

Eleven million or 20 million, we cannot deport them all, which is what a lot of Americans seem to want. We’re having a hard time deporting just the criminals among the illegals, and when we do, they manage to slip back into this country within a few weeks after they were thrown out.

I remember back in the ’60s, some black ministers in Los Angeles tried to bring about an end to the bloody warfare between the Bloods and the Crips. They managed to call a truce meeting attended by the leaders of the two gangs. Also present were city officials, LAPD brass and line officers, social workers as well as ministers from various black churches. The meeting was closed to the public and media. After several hours the meeting broke up and as the gang leaders came out of the building they were met by a horde of reporters.

What the media got out of the meeting was that everyone agreed jobs were the solution to the daily gangbanging. If young African-Americans would only find work, the shootings and other illegal gang activities would stop. But a leader of the Bloods told reporters: “We don’t want no minimum wage jobs, we want $25-an-hour jobs.”

Teachers and cops didn’t make $25-an-hour back in the ’60s. It just goes to show that illegal immigrants don’t take jobs from Americans.

So, what shall we do about the illegal immigrants in our country? First of all, we need to get rid of the dope dealers, rapists, robbers and other dangerous criminals among them. I used to take my students on field trips to the federal prison in Bastrop. Over half the inmates in that prison were illegal immigrants. Deporting them after they are released from prison does little good if they can slip back in to continue preying on law abiding members of the public.

We need to build a wall on our southern border similar to the Berlin Wall or to the combination wall and security fence Israel built to keep out Palestinian terrorists. That would keep deported criminals from returning and would keep new immigrants from sneaking in. What we have now is a joke. Almost anyone can climb over, squeeze through or tunnel under our present security barrier.

As for the other illegals, it is easy to say that if they want to become American citizens, they should return to their native lands, apply for entry into the United States and await their turn before returning. The matter of fact is that once they’ve returned to their country of origin, they’ll croak before their turn for reentry comes up.

Here is my radical suggestion, one for which I will surely get a lot of flack. Why not just legalize the illegals who have been working hard to support their families and who have not committed any crimes other than being here illegally? We can easily absorb these folks … as a matter of fact we have already absorbed them with no harm done to us.

Frankly, I don’t give a damn whether the people that mow my lawn, clean my house, repair my roof, put down some new flooring, etc. are documented or not as long as they do a good job at a price I can afford. I do believe that deporting millions of illegals will disrupt our economy.

As a former narcotics enforcement officer, it makes more sense to me to legalize illegal immigration than to legalize the recreational use of marijuana. A hard working immigrant will be a contributing member of society, a stoner will be a drag on it.

Well, I guess comprehensive immigration reform isn’t as critical as Sen. Marco Rubio has been telling us it is. If it were, I wouldn’t think that a few thousand folks would stand in the way of legalizing 20 million illegal immigrants. Right? Not according to Mr. Rubio.

Florida Republican Sen. Marco Rubio, a co-author and key proponent of the Senate immigration bill, said he will revoke his support if an amendment is added that allows gay Americans to petition for same-sex spouses living abroad to secure a green card.

“If this bill has in it something that gives gay couples immigration rights and so forth, it kills the bill. I’m done,” Rubio said Thursday during an interview on the Andrea Tantaros Show. “I’m off it, and I’ve said that repeatedly. I don’t think that’s going to happen and it shouldn’t happen. This is already a difficult enough issue as it is.”

So let me get this straight. Rubio has been running around for months telling us that it is critical to pass his gang of eight bill because to do nothing would ruin the future for all Americans. Never mind that they broke our laws to get here, are causing us to spend billions on public education and healthcare, and haven’t paid taxes. Nope, we MUST legalize them now or the country goes down the drain. And we must legalize them before we secure the border so that they can pay the bill to secure the border. Alrighty then.

But, if you include a few thousand people that happen to be fond of people that are of the same sex they are, suddenly he’s “done”. Are you telling me that he thinks a few thousand same-sex couples are a bigger problem for the United States than the 20 million people here illegally? Is he insane?

You know, when I first heard Rubio speak in person I thought he was awesome. But nowadays, I’m beginning to think that he might be the worst kind of politician. One that says only what he thinks needs to be said to get a vote. No core convictions, just a core belief that he should be in office. Good luck on that 2016 presidential run Marco.

I think this picture says it all when it comes to Sen. Marco Rubio:

Being Chuckie Schumer’s water boy on this issue has all but guaranteed that he will not be a viable candidate for President. Worse, he tells English audiences one thing and Spanish another. Take a look:

As with the radio ads you hear all day long, this is all about tough border security, right? But on a recent Univision appearance, Rubio said this:

In a Spanish-language interview Sunday with the network Univision, Sen. Marco Rubio, the leading Republican on the Gang of Eight comprehensive immigration reform group, made his strongest statement yet that legalization of the nation’s estimated 11 million illegal immigrants must happen before any new border security or internal enforcement measures are in place, and will in no way be conditional on any security requirements.

Unbelievable. The idea that we can suddenly legalize every single person in this country in one fell swoop and not expect millions more to pour across the border is ludicrous and defies not only common sense but history – as that graphic above states, remember 1986?

And don’t forget the MarcoPhone: Move Over “Obama Phone,” Say ‘Hola!’ to the Marco Rubio Immigration Phone, AKA MarcoPhone.

And last but not least: in the ad above, Rubio says that no welfare benefits will go to newly legalized immigrants – that is just not true. As the Washington Examiner reports:

The Senate Judiciary Committee voted Monday to allow illegal immigrants who get legal status to begin collecting tax-welfare payments, as the panel spent a fourth day working through amendments to the massive immigration bill and party-line splits began to emerge.

Rather than trying to “improve” this disaster, Texas Sen. John Cornyn should be working to kill it.