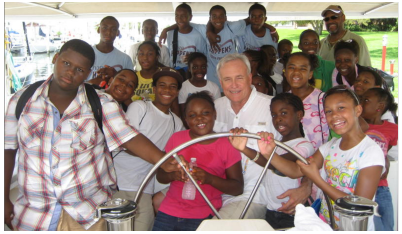 Bill King is a sailor. While I have never sailed with him, I am pretty sure that he has always returned to the dock with all his crew and passengers.

On the other hand, Sylvester Turner’s client “disappeared” in Galveston Bay and was later found in a Spanish prison…after the insurance paid on the life insurance claim. During Sylvester’s first campaign for Houston mayor in 1991, Wayne Dolcefino found him living in a house with Dwight Thomas (since the home Turner owned with his wife was outside the city). Dwight had introduced Sylvester to a man named Sylvester Foster – a “male model” and “hairdresser.” Turner prepared a will for Foster who then went missing from a boat in Galveston Bay and then worked to probate the will and have Foster declared dead in order to collect the life insurance funds. It is a story of insurance fraud but more importantly it is a story of character. Read on.

During his second race for mayor in 2003, Sylvester Turner taught Dave Wilson a trick or two. In 2003, Doris Hubbard, a campaign consultant for Sylvester’s 1991 failed bid for mayor, paid Brenda Flores to recruit a black Bill White to run against the white Bill White. An Acres Homes political organizer paid a white, rabble-rousing democratic political operative to recruit a guy with the same name to mislead and confuse voters so the black liberal dude could win his second mayoral bid. Would the white Bill White have a claim under the Sylvester Turner supported HERO ordinance? I love this stuff. It does not end here.

As you know, Bob Lanier beat Sylvester Turner in the 1991 mayor’s race. On Lanier’s inauguration day, Turner’s wife, Cheryl Gillum Turner, filed for divorce. On April 19, 1994, Cheryl Turner, a ten year veteran of the Harris County District Attorney’s Office, was deposed in Sylvester’s lawsuit against Wayne Dolcefino and Channel 13. During the divorce, Ms. Turner, an experienced attorney, signed an affidavit recounting Sylvester’s trysts (which she now recants). Sylvester has made his ex-wife an issue as he brought her out to refute the allegations made in her own affidavit and deposition.

On May 19, 2005, Cheryl Turner was indicted by a Harris County Grand Jury for misapplication of fiduciary property – or stealing between $100,000 and $200,000 of client funds. After a year and a half of court appearances, on September 9, 2006, Cheryl Turner pled guilty to the second degree felony and was sentenced to ten years in prison. A few months later, Turner was released and placed on a ten year probation (to end in January 2017) with a condition that Turner pay $63,000 in restitution to the complainant. On December 15, 2005, the Texas Supreme Court accepted Turner’s resignation from the State Bar of Texas. That order lists nine complainants and over $180,000 in stolen funds.

In May 2012, Turner’s attorney filed a motion asking the court to subtract $30,000 paid to the complainant in the criminal case by the State Bar of Texas.

A few months later, in December 2012, Marc Brown signed an order terminating Turner’s probation – four years early. Why was Turner’s restitution reduced by money paid by the State Bar of Texas? Was Turner able to pay $18,141 from May – December 2012? Was the probation terminated before Turner paid all the restitution owed? Was Turner treated differently than other thieves?

Over the years, Sylvester Turner has closely aligned himself with special interest groups including public employee unions. We know that the police and fire unions endorsed Sylvester Turner for mayor even before this election season began. This should furrow your brow. 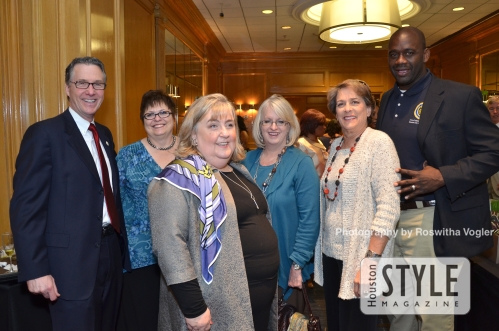 Good citizens of the city should also question Turner’s alignment with people like Stephen “king of conflicts” Costello and Cindy Clifford. Following the general election, Costello was quick to endorse Sylvester: “Sylvester and I agree that ReBuild Houston [READ: RAIN TAX] is a good baseline infrastructure program that can and must be improved to meet the needs and expectations of Houstonians.” I was not surprised to hear Costello continue to support his rain tax. The remainder of Costello’s statement should cause Houstonians great alarm: “Sylvester Turner is the best candidate to connect all of Houston through multi-modal transportation, and I look forward to working with him on critical transportation issues like commuter rail.” I fully expect Turner, if elected, to appoint Costello as the Chair of METRO. In a time when our city is in dire financial straits, the father of our rain tax needs to quickly exit stage left. The connection between Turner and Costello should cause Houstonians to run to the polls for Bill King.

Turner is also very close to Cindy Clifford – a “lobbyist” and “strategic marketing specialist.” Recent stories have questioned Clifford’s failed adherence to the city’s procurement and lobbying rules. After Clifford’s client received the latest airport contract earlier this year, Clifford received a citation for shoving a fellow lobbyist at City Hall. There is a reason why Clifford’s Twitter feed is filled with Turner stories. She and her buddies (like Annise Parker) are scared to death that Bill King could come in and make the city’s politics honest.

This is one of the most important city elections of my lifetime. When you think about the upcoming race, think about the massive cronyism machine that will be cranking down at City Hall with a Turner administration. Sylvester Turner as mayor could mean the death of a once great city. The very people who have bankrupted the city are desperate to get Turner elected. If Turner is elected, there is only one thing to do – abandon ship!

Memorial Park was a gift from the Hogg Family to the City of Houston. In 1924 Mike and Will Hogg, the sons of former Governor of Texas James Hogg (1891-1895), deeded 1,503 acres to the City of Houston. Under the transfer agreement, the land must be used for park purposes or be subject to reversion to the Daughters of the Republic of Texas. Ima Hogg, sister of the two donors, charged several people with the task of protecting the park: Sadie Gwin Blackburn, Terry Hershey, Frank C. Smith Jr., Dr. John D. Staub. This group later became known as the Memorial Park Advisory Committee. To give you an idea of the value of this gift, a square foot value of $100 multiplied by the park acreage equates to 6.5 billion dollars. Currently, land in the Memorial Park area has sold for $300 per square foot; so, you do the math. There is no question that we are talking about a lot of money.

First, you should know TIRZ 16 is a Tax Increment Reinvestment Zone established in 1999. This sends the incremental value of City of Houston property tax from 1999 to the TIRZ – this is big money, hundreds of millions of dollars. TIRZ 16 covers the Galleria area and their leadership wants to build a Bus Rapid Transit System down Post Oak. I disagree with his scheme for a number of reasons; but, I have remained silent because the TIRZ 16 board includes some of the property owners within the TIRZ. If they want to ruin their property value, far be it for me to tell them they cannot do so. Let me explain how this impacts Memorial Park.

All TIRZ are a political subdivision of the State of Texas and and have a specific purpose and duration. As you can imagine, the City of Houston would love to have their hands on this revenue stream. TIRZ 16 has spent most of their future revenues on other projects through the life of the TIRZ, which is set to expire in 2029.

Think of the value of the Galleria and Uptown areas. The area has more than doubled in value since 1999, we are talking hundreds of millions of dollars in property taxes. TIRZ 16 is looking for an extension; so, this is not a good time to go hat in hand and ask Mayor Parker “mommy may I” when there is an election around the corner. TIRZ 16 desperately wants to be extended through 2040, which would allow them to to finance construction of the Bus Rapid Transit System.

This spring, I spoke twice against expanding the TIRZ to include Memorial Park: once at council and then at a public hearing held by Stephen Costello. Yes, another controversy involving Costello. By now, alarm bells should be going off in your head.

Two years ago, Stephen Costello, leader of Costello, Inc., a civil engineering and surveying firm, used the Renew Houston (Prop 1) ballot measure to bolster his own pocketbook. The last time I looked, Mr. Costello had over 40 million dollars in contracts with the City of Houston and he refuses to recuse himself from voting on contracts involving his firm. More importantly, there was a contract that he and the city of Houston refused to disclose, even after I made repeated trips to City Council. We still do not have that contract, even though he reports the contract on a disclosure form.

Now that we have established that a conflicted councilman does not mind the appearance of impropriety, you should be prepared for the next bit of information. Mr. Costello is a past president and current advisory board of the Memorial Park Conservancy. The new chairman of the Memorial Park Conservancy is Bryan Jordan. Mr. Jordan is President and CEO of Jones & Carter, Inc. This is the engineering firm owned by Bob Jones – the man who said, “We do not have any leadership from our African American council members.”

When I spoke at City Council on the Memorial Park issue, I expressed concern that TIRZ 16 would include the park in their borrowing schemes. Council Members Oliver Pennington and Mike Laster were quick to say that could not happen. This was disconcerting to me because Mr. Laster was previously sued for his conduct involving a management district. The City Attorney responded that he would offer an opinion on potential borrowing issues involving Memorial Park. Unfortunately, that opinion never came and this issue went unaddressed.

Memorial Park was a gift to the City of Houston, a gift of incredible magnitude that no one could ever afford to replicate. Mayor Parker has balanced the City of Houston budget by selling off assets over the last several years. Mayor Parker and Bill White have established a precedent by spending far more money than the City brings in and selling assets to produce a balanced budget. This brings grave concern to anyone who cares about Memorial Park.

Allowing Memorial Park to be annexed into a political subdivision of Texas also creates risk. The city has now created an opportunity for the Legislature to interfere with the park. This, of course, would never be an issue if Mayor Parker had cared enough to take care of this jewel of Houston.

Now, we get to the root of the matter – Mayor Parker has bankrupted the City. For years, as Controller and Mayor, Annise Parker has spent far more money than the City’s revenue. She is using the drought as a reason for this necessity; but, I say “hog wash”. There will always be natural disasters that will always threaten the park. It is an asset of the City and should be maintained as such. The Mayor’s liberal spending policies have now made it so the City cannot even take care of this great asset.