Just click on the link in the sidebar and it takes you to the order page.

Thanks to my beautiful Gwapa for modeling the sticker. 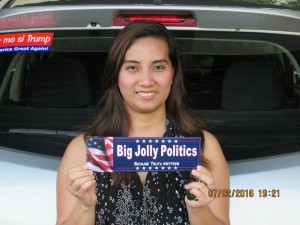 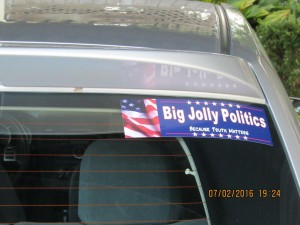 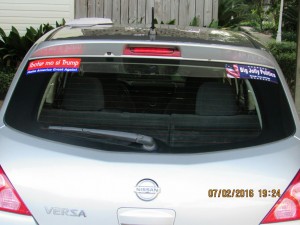 I have been asked several times to write about my choices for the local and statewide judicial races. Stan Stanart, the Harris County Clerk, recently told me of his sample ballot that allows voters to enter their name and address on his website and produce a personalized sample ballot; so, I decided to give it a try. Stan and his team have developed a program that allows each voter to create their own unique slate to post and send to friends. Think of it as Stan’s way of overcoming the slate machines. And, when you think about it, Stan has revolutionized the way we can share our selections. Running the election operations in the largest county in Texas always makes Stan and his guys the smartest guys in the room. They do a great job.

You will notice I left many unopposed judicial races blank. I do this to send a message. The message is clear for the Criminal District Judges – I am tired of you supporting Judge Susan Brown as the Chief Administrative Judge of the Criminal Courts – think Goforth, the runaway grand jury, Constable Victor Trevino, judicial bypasses, and Devon Anderson. I have intentionally left them blank, which will show up as an under vote. This sends a message. I, of course, skipped Devon Anderson.

You will notice that I voted for Stacey Bond. She got my vote for standing against prosecutorial misconduct in her court. I also voted for Rick Green over Paul Green for Place 5 on the Texas Supreme Court. I do like what has happened at the Texas Supreme Court, especially concerning the City of Houston cases like HERO. I previously wrote about Jim Leitner for Harris County Attorney. It makes no sense for his opponent, a five-year lawyer, to represent Harris County in all civil litigation and advise Commissioners Court. Jim is the only choice.

Create your own ballot, print my ballot, or use something else entirely. Most importantly, VOTE! Study the candidates and, if you do not know them or the issue, do not feel compelled to vote in that race. 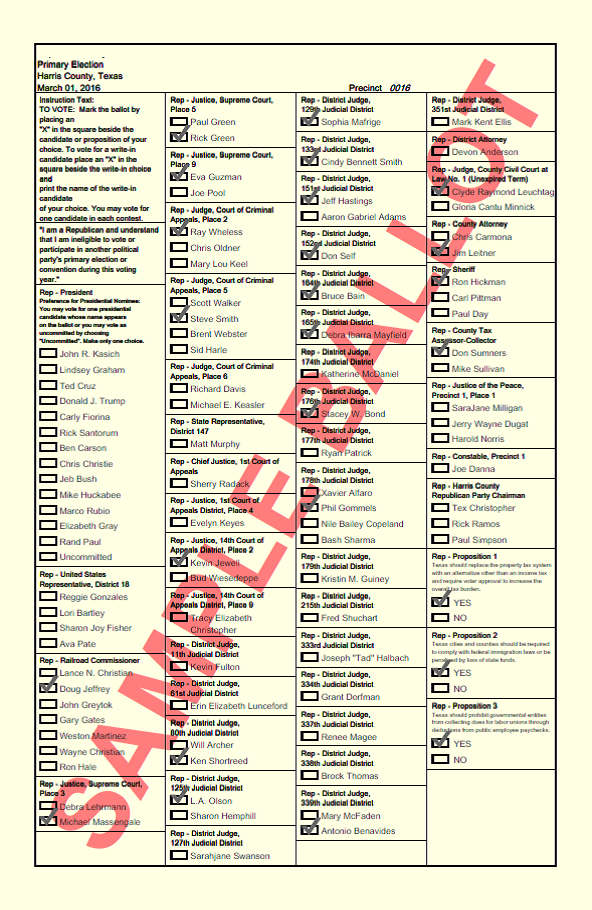 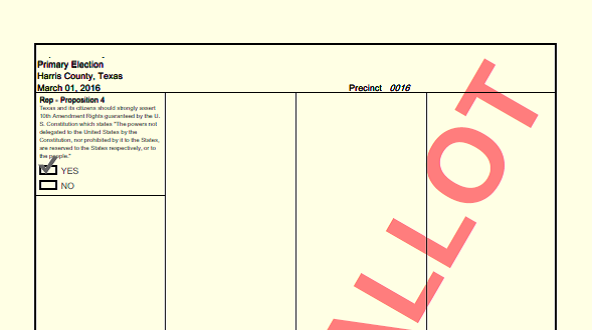 Finally! It may have taken six and a half years after his passing, but there is finally a book decidedly about Jack Kemp. Due for release in bookstores and online this coming Tuesday, Jack Kemp: The Bleeding-Heart Conservative Who Changed America by Mort Kondracke and Fred Barnes, offers readers a fresh recap of the life of “the most important politician of the twentieth century who was not President.” A sentiment I agree with fully.

Any reader of Big Jolly Politics knows of the regular mentions of Jack Kemp on this website, primarily by Ed Hubbard and myself, but not limited to the two of us.

While Jack Kemp is not an authorized biography, this is the first attempt to explain a man and his legacy that deserves understanding and studying. Jack Kemp is well documented and it reads fairly well as it never gets bogged down in mush the way some political narratives can.

The authors rely on news reports of the day and official documents to back up plenty of fresh interviews with those who worked with Jack Kemp over the course of his days as a football player, a Congressman, a Presidential candidate, a Vice-Presidential candidate and finally as a think tank entrepreneur.

Kondracke and Barnes spend a lot of time weaving their way through the two biggest domestic legislative accomplishments of the Ronald Reagan presidency: the Economic Recovery and Tax Act of 1981 and the Tax Reform Act of 1986. Jack Kemp was crucial and necessary to both.

The supply-side economics which were the basis of the large tax rate cuts voted and signed into law in 1981 are but one part of the success story. The 1986 Tax Reform Act was at least equally as important, though seemingly less talked about in political writing. Much has been written about the supply-side economics movement on the 1970s and 1980s, but the 1986 story is told less often.

Both stories are shared in Jack Kemp in great detail, with Jack Kemp not necessarily playing the hero, but showing true leadership, much of it based purely on principle. And readers are offered a play-by-play for both, and for good reason.

The twenty-five years of prosperity that the tax rate cuts engineered are impossible to argue against, though many on the Left are still trying to debunk. And the tax reform was so monumental it garnered “the largest audience for a bill signing during the Reagan presidency.” And as Kondracke and Barnes note, “Reagan called the measure “the best anti-poverty bill, the best pro-family measure, the best job-creation program ever to come out of the Congress of the United States.”

The authors also editorialized, “The 1986 tax reform stands even now as a model for leaders of both parties who hope to make the tax code simpler, fairer, and more economically efficient.” Reading Jack Kemp makes this statement clearer, and valid.

These were stories worth reading. For some, the play-by-play will be too much minutiae to digest. For students or researchers, there can never be enough. It is a fine line to tread with a book such as this. Congressional and policy battles can be that way. And the policy fights are not limited to economics, but also reach into foreign policy and matters related to the defense of the nation.

Jack Kemp offers much in the way of campaign reporting on Kemp’s campaign for President in 1988 and his campaign to be Bob Dole’s Vice President in 1996. But compared to the policy battles of the day, the campaigns were given considerably less space.

One disappointment in Jack Kemp, is the lack of focus on Kemp’s work in what we would call “civil society,” though there are many differing views on what that actually refers to. Yes, there is an entire chapter titled “Poverty Warrior” which recounts Kemp’s years as Secretary of Housing and Urban Development (HUD). But this chapter really does not do justice to what Jack Kemp wanted and what he was actually fighting for.

During the years of the first Bush Administration, 1989 and 1993, there was only one point where a Kempian approach to things could have really changed perceptions and reality for President Bush. That point came in 1992 when Los Angeles erupted into riots after the Rodney King jury verdict. Jack Kemp was probably the last best hope to save the Bush administration and earn it a second term in office.

But, it was too late to save the Bush presidency. The work that Kemp had pursued could have changed history, had there been a more receptive audience, both in the White House and around the country. By the time the Bush administration cared about what Jack Kemp wanted to address, Bill Clinton had already told audiences he felt their pain, and he was on his way to unseating an incumbent President. The riots earned a mention on parts of 6 pages, total. For a book that consists of 327 pages of content, this is a real shame.

Jack Kemp spent plenty of time and political capital fighting for community-saving ideas like urban enterprise zones and parental choice in education. Kemp was indeed a “poverty warrior” wanting to offer a light at the end of the tunnel for those in the worst of despair, and refusing to turn his back on “the least of these.” Kemp saw economic growth as a vital element to turning the tide, or in the “rising tide” that would lift all boats. While he could be long-winded, as Kondracke and Barnes point out, and Kemp could talk more than some audiences were willing to listen, he never stopped believing in or advocating for economic growth as the ultimate solution.

We can quibble about these words until the end of time, and we probably will. Though it is hard to argue against them and remain true to them at the same time. But, the vision that a “Kemp model” (as the authors see it) offers, is the possibility of a return to greatness.

The reason to seek the “Kemp model” again now is rather simplistic in its nature, especially from a political point of view. In their interview with Norman Ornstein, he told the authors, “if Kemp had prevailed, we would be looking at a majority Republican party today” and they put forth, “because a Kempian GOP could win 40 to 50 percent of the Hispanic vote and 15 to 20 percent of the African American vote (versus 27 percent and 6 percent, respectively, for Mitt Romney in 2012).”

It is hard to argue against that math.

There are many reasons why the Kempiam model did not succeed in the ways that it could have. Some of these reasons are covered by Kondracke and Barnes, other reasons will have to wait. What Jack Kemp makes clear, is that it can be done. It just cannot be done alone. Whether is a single politician who takes up the mantle against the D.C. machine, or by a society that sends elected representatives to Washington and just hopes for the best. Jack Kemp needed Ronald Reagan, and vise versa. But even then, they were two men against the world.

What we need will require a team.

Leaders, whether church, business or political, cannot make themselves the things that make up the “Kemp model.” Not overnight anyway. But we can nurture these things in our young people and in our next generation of leaders. To not do this, to not pursue these ideals, is to witness more of the same that we have watched since the day Ronald Reagan boarded Marine One for the last time and waved goodbye.

The price for such inaction is way too high.

Finally, there is a Jack Kemp story beyond the Washington D.C. area code waiting to be told. That story will be told. This narrative is not offered in this noble work by Mort Kondracke and Fred Barnes, but this book is an important first work in the telling of the Jack Kemp story and I highly recommend it.

As the title states, Jack Kemp “changed America”, it was not the other way around. To see the real possibilities that America can achieve, start with Jack Kemp add some Ronald Reagan, and begin the real work from there.