You are here: Home / Politics / National / Why is Kathaleen Wall Misleading Voters and Using Democrats’ Talking Points About Mail-In Voting?

Since the beginning of the COVID-19 outbreak, Democrats have intensified efforts to expand mail-in voting across Texas. The Texas Democratic Party has filed two lawsuits, one in State District Court in Travis County and another in Federal District Court in San Antonio, to allow any voter to cast a mail-in ballot. These efforts have been met with strong opposition by grassroots leaders in the Republican Party (such as Republican Party of Texas Chairman James Dickey), as well as elected Republicans at the state and local levels. Even President Trump has been vocal about his concern that expanded mail-in voting could lead to an increase in election fraud.

In light of this, one would expect Republican candidates for office to be fighting for secure elections and ballot integrity. Unfortunately, Kathaleen Wall is instead using the Democrats’ own talking points on mail-in ballots to mislead voters in her campaign for the Republican nomination in Congressional District 22.

In the middle of April, Wall sent voters in the 22nd District a mailer featuring the official Texas state seal encouraging voters to “stay safe and vote from home” and stating “you have the green light to vote by mail.” The mailer further claimed the following:

“Recently, the Texas Secretary of State ruled that voters’ concerns over contracting or spreading the COVID-19 virus and endangering their health by visiting a public polling place meet the election law requirements to be deemed eligible to vote absentee.”

This statement is demonstrably false. The Texas Secretary of State has never made any such ruling. While the Texas Secretary of State has issued an election advisory regarding COVID-19 voting and election procedures, this advisory simply restated the statutory definition of “disability” for the purposes of eligibility for a mail-in ballot. This definition only encompasses a “sickness or physical condition” and at no time has the Texas Secretary State ruled that a voter who only has “concerns” related to COVID-19 is eligible for a mail-in ballot. 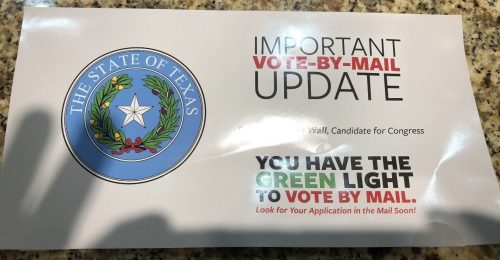 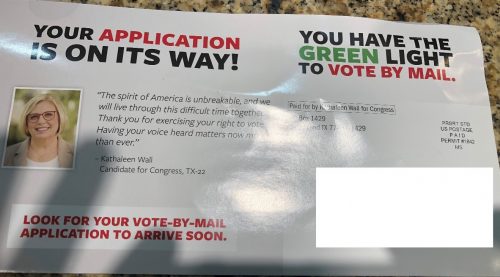 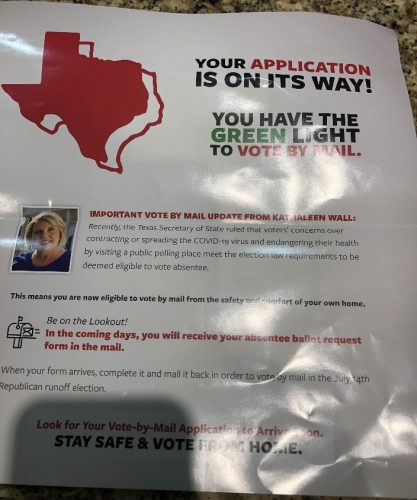 Around the same time this false mailer was hitting mailboxes across the 22nd District, Texas Attorney General Ken Paxton sent a letter to House Elections Committee Chairwoman Stephanie Klick advising that the fear of contracting a virus is not a “sickness” or “disability” for the purposes of eligibility to vote a mail-in ballot. Paxton’s letter to Klick also advises that “to the extent third parties advise voters to apply for a mail-in ballot based solely on fear of contracting COVID-19, such activity could subject those third parties to criminal sanctions imposed by Election Code section 84.0041.” An offense under this section is a state jail felony. This guidance was necessary after some Democratic officials across Texas falsely claimed, as Wall did in her mailer, that voters merely concerned about COVID-19 could and should vote by mail.

In light of this guidance from the Attorney General, Wall had to walk back her mailer and posted a clarification on her Facebook page stating that “you have to have the virus” to qualify for a mail-in ballot. 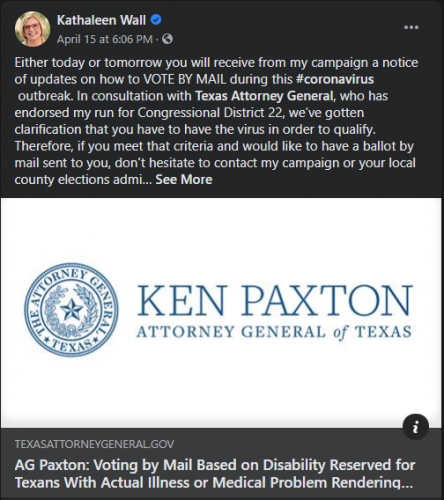 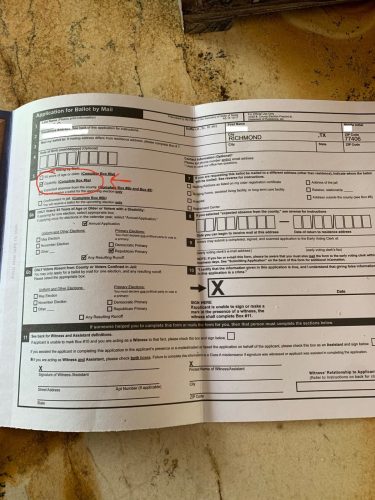 Wall’s conduct in connection with these mail-in ballot applications is inexcusable. Wall is a member of the State Republican Executive Committee and is well versed in ballot security matters. In her campaign biography, Wall even touts her experience as Chair of the Election Integrity Working Group of the Republican Party of Texas. Although she has employed a cadre of highly paid consultants (campaign finance records show that she has spent more than $4.4 million so far during her campaign in the 22nd District), Wall has the ultimate responsibility for the content of the mail that is sent by her campaign.

Wall is also not a novice candidate. In 2018, she ran unsuccessfully for the Republican nomination in the 2nd Congressional District, now represented by Dan Crenshaw. Wall’s husband, Holly Frost, is still registered to vote at the couple’s $3.7 million homestead-exempt home in Congressman Crenshaw’s district.

Had the Democratic Party or a Democratic candidate for public office sent mailers such as the ones sent by Ms. Wall, Republicans would rightfully be calling for such conduct to be investigated by the appropriate authorities. At the very least, Ms. Wall owes the voters of the 22nd District an apology as well as an explanation for why she sent these misleading mail-in ballot applications even though she knew the information her campaign was providing was false. 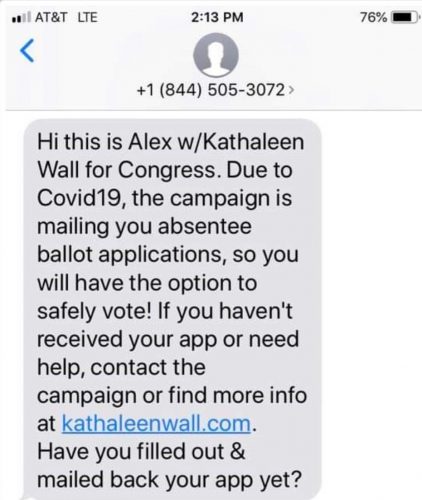