I can’t even begin to describe how offensive this is to me: 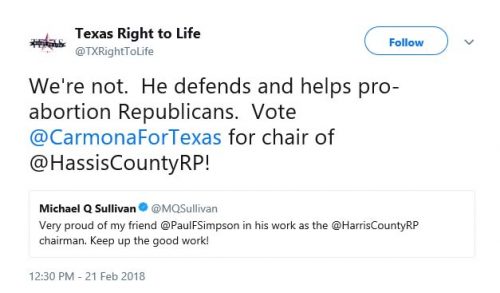 Forget the misspelling of the name of the county for which Chris Carmona is running to defeat the incumbent Paul Simpson. Focus on the fake grassroots pro-life group spending hundreds of thousands of dollars attacking incumbent Republicans around the state that Texas Right to Life themselves rated 100% pro-life.

If you don’t think that the Texas Right to Life political action committee is a fake grassroots organization, you need to read this, which was put out by the Texas Catholic Conference of Bishops. Here is a snippet:

And if you somehow still believe that TRTL is a grassroots organization, consider that of the $1,930,810 the group has raised this election cycle, 93% of it came from 5 large donors. Read this article in the Dallas Morning News if you want to see how much money is pouring into three political action committees focused on reshaping the Republican Party of Texas.

I guess that this issue is personal to me so you can disregard whatever I say if you choose. My wife and I attended our first protest against the Supreme Court ruling in Rove v Wade in the early ’80’s. If we had been older, I have no doubt that we would have been on the streets in the ’70’s, after the illogical ruling by the Supreme Court. We first met Randall Terry on the streets of Houston in 1986 after the birth of our oldest child. Being against the atrocity of abortion is not a new thing to me.

And it certainly isn’t new to Paul Simpson. As I mentioned here, I first met Paul in 2007. Some of our first conversations were about the travesty of abortion. For anyone to say that Paul Simpson supports pro-abortion candidates is not only absurd but literally sickening, as I felt today when reading the fake grassroots group Texas Right to Life’s tweet. Saying that Simpson is a RINO as the Carmona shills are doing is one thing. Saying that he supports the atrocities of abortion is in another league altogether.

When will voters fight back about these types of lies?

Yes I’m passionate about this. Yes I did ask Chris Carmona if he would denounce this group’s slanderous comment about Paul Simpson. He has not. That speaks volumes to me.