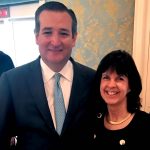 “Valoree is a proven conservative and a trusted friend,” said Cruz. “She is a strong partner at the state level on issues ranging from school choice to addressing flood control infrastructure in the Houston area following Hurricane Harvey. I am proud to endorse Valoree for re-election, and I urge the people of the 150th district to send her back to Austin in the fall.”

Swanson and Cruz have had a great working relationship since 2009. They are both working hard for their constituents now, and that relationship continues to grow.

“I am very honored to have received this endorsement from Senator Ted Cruz, the staunch, conservative leader, fighting for us in Washington. I look forward to continuing to work with Senator Cruz to help the people of Texas,” commented Swanson.

Representative Valoree Swanson was elected in 2016 to serve Spring, Texas and surrounding areas. She currently serves on the House Elections Committee and House Human Services Committee.

She is an active member of the House Republican Caucus, Texas Conservative Coalition, the Energy Caucus, and is a founding member and the only woman on the Texas Freedom Caucus.