Wow! What an election day for truth and commonsense in Houston yesterday! Voters turned out in droves and defeated Mayor Annise Parker’s “personal” unequal rights ordinance (HERO). As I said on Facebook, it feels GREAT to win one!

The supporters of HERO were deceptive, mean, nasty, and just plain obnoxious. I’m happy, no THRILLED, that voters stood up for what is right and said no.

It was a good day overall for those of us wanting better city government for Houston. Although he wasn’t my choice, and frankly is about as conservative as Sylvester Turner, Bill King made the runoff. If he wins the runoff and follows through on a quarter of his promises, the City of Houston will be much, much better off in the future.

My friend Mike Kubosh was the only elected official not in a runoff. And because the voters approved a change in term limits, he’ll be there for four more years. AWESOME!

Bill Frazer led the controller’s race. This is probably the second most important race that was on the ballot after HERO. If he can somehow win the runoff, he can use his expertise to let voters know the truth about the city’s finances. If that happens, more and more Republicans will be successful in council races and maybe, just maybe, we can turn this Detroit ship around.

What this election tells me is that people are tired of being bullied about false issues. There never was a need for Parker to introduce such a divisive ordinance. Houston is generally regarded as the most diverse metropolitan city in the nation. For goodness sake, Parker was elected 9 times in 18 years by the very people she now calls bigots. Fascinating.

I would be remiss if I didn’t congratulate those primarily responsible for defeating HERO. Thank you Jared Woodfill for being courageous enough to stick your neck out in the face of nasty, nasty people. Thank you Dr. Steven Hotze and Al Hartmann for funding this effort and taking the abuse inherent in dealing with nasty, nasty people.

For now, let’s just celebrate a very big win in the war against tradition, bloated bureaucracies, and unnecessary laws. And then get to work tomorrow on helping the conservatives in the runoffs.

The Island of Hope Church of God in Christ is hosting a GOTV (get out the vote) rally tomorrow night in an effort to defeat the egregious Houston Unequal Rights Ordinance (HERO). 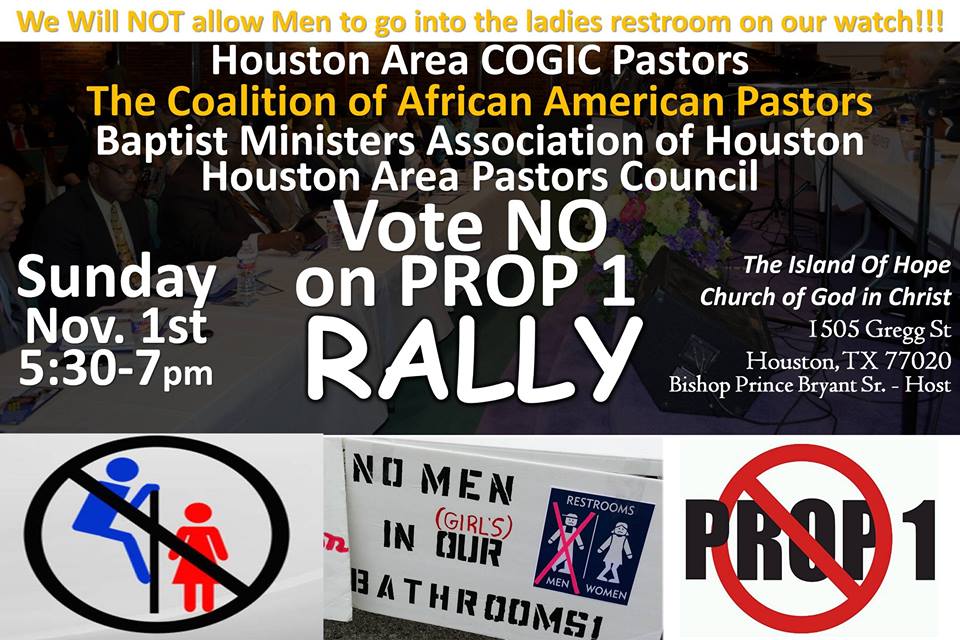 The supporters of this measure are increasingly vile, mean, deceptive, and nasty. Houston City Council candidate Carl Jarvis discusses the ordinance and why people are afraid to criticize it:

I don’t know why people can’t support this ordinance without resorting to name calling and lying. The fact is that this ordinance favors a tiny group of confused individuals over 99.999{997ab4c1e65fa660c64e6dfea23d436a73c89d6254ad3ae72f887cf583448986} of the population. Women (regardless of age) are the most discriminated against because in general they have a higher regard for personal privacy than men do. Why can’t women have a reasonable expectation of privacy when they enter a public restroom, spa, or locker room? Why should a pre-adolescent teenage girl be forced to watch some dude wag his willy in the shower? And that doesn’t even touch the whole issue of crime, read what Don Hooper wrote about that.

This shameful ordinance needs to be voted down and needs to lose in a big way. So big that it doesn’t come back up for a long, long time.

If you live in the City of Houston, you need to talk to your friends, neighbors, church members, club members, whomever you can find and convince them to get out and vote against this monstrosity. Don’t let Obama, Clinton, Parker, any other left wing fruit loop, or money from Hollywood turn Houston into San Francisco.