A brief look at the campaign finance reports of three Texas House seats in Harris County.  I was surprised at the number of Republicans that are now paying for block walking. That used to be a Democratic Party thing.

This is another race that Empower Texans and Texas Right to Life is trying to influence in a big way. In addition to the $12,800 you see on this report from Kevin Fulton, ET has previously given him $20,000 and TRL $15,000. Harless appears to be tapping into the network that his wife, the former representative of 126 built up. And Stanart is relying on the little fella to get her into a runoff, although Fulton might have blocked that by also paying him.

This race continues to be the highest profile House race in the area. Outsiders continue to dominate the funding of challenger Dokupil. Although Davis has a significant advantage in COH, that is meaningless when Gov. Abbott can drop any amount he wants at any time. Davis continues to dominate in the number of contributions from individuals within the district. The HPOU pickup is very nice for Davis. 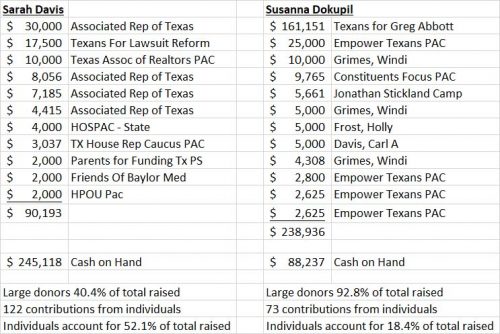 I’m not sure that we should call this a contested race but the incumbent did have someone file against her, so that is the definition. Swanson’s COH advantage comes from earlier contributions from Empower Texans, Texas Right to Life, Texans for Lawsuit Reform and the Briscoe Cain campaign. She paid $28,000 to 90 Degree Agency, which to the best of my knowledge provides paid block walkers.  As a perennial candidate, Wilson’s path to victory has never been clear and he has a very uphill battle to climb.

Since everyone seems to be talking about Gov. Greg Abbott’s attempt to oust State Rep. Sarah Davis, I thought that I would take a deeper dive into the campaign finances in the race. I didn’t find anything shocking but it certainly confirms the idea that outside groups are behind the effort.

This table is self-explanatory.

The important numbers to me are that 42.6% of Davis’ funds come from in-district voters compared to only 25.8% of Dokupil’s. Even more important than that is the number of in-district contributions, 168 – 45. There doesn’t seem to be a rush among the district’s voters to oust Davis, at least from those that contribute financially to campaigns. Anecdotal evidence shows the same, with Dokupil busing in large numbers of block walkers.

The next two tables show the top contributors to each campaign. I used $2,500 as a cutoff because it was convenient.

Those two tables also have some interesting information. You can clearly see the power of incumbency in Davis’ table and the advocacy groups in Dokupil’s table. Also note the presence of Holly Frost and Kathaleen Wall – they live in the district. The in-kind contribution of Charles Blain’s services as a campaign aide from Empower Texans is also interesting but not surprising. Dokupil’s report only shows two in-kind contributions for Blain’s services, Empower Texans’ report shows three. Briscoe Cain’s is simply a pass-through from Empower Texans/Farris Wilks.