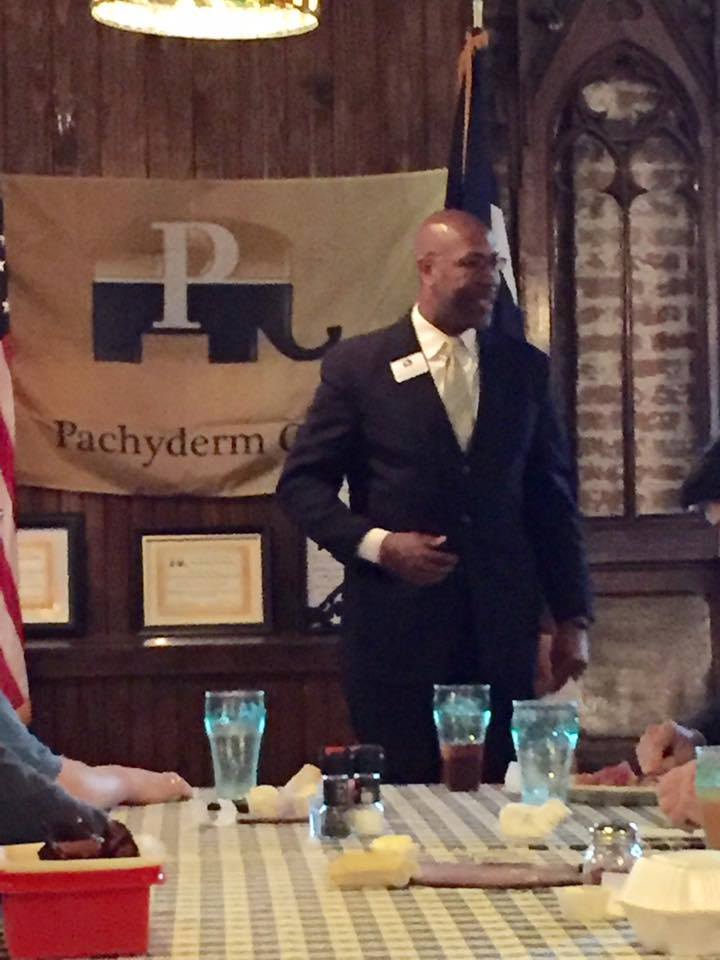 Dr. Robin Armstrong, a self-identified Cruz supporter, appeared before the Downtown Houston Pachyderm on April 7. Dr. Armstrong was campaigning for a position on the Republican National Convention Rules Committee. The 56 delegations to the Republican National Convention will pick their members for the four committees: rules, platform, credentials, and permanent organization. The Rules Committee has 112 delegates – two members, a man and woman, from every state, U.S. territory, and Washington D.C.

The Republican National Committee Rules Committee will be critical this year. “He who writes the rules, rules — as the old saying goes,” said Gary Emineth, former chairman of the North Dakota Republican Party and expert on the party’s rules. The slightest of rule changes will all be designed to hurt one candidate or help another.

Ted Cruz is hoping to rely on the delegates from Texas, his home state. The Texas selection of a National Committeeman and Committeewoman is governed by Rule 40.

Rule No. 40 – National Committeeman and Committeewoman At the Biennial State Convention held in presidential election years, each Congressional District shall caucus and recommend a man for Republican National Committeeman from Texas and a woman for Republican National Committeewoman from Texas. These recommendations shall be forwarded to the National Nominations Committee by the district’s member to the committee, who shall support them on at least the first (1st) round of voting. The National Nominations Committee shall select one (1) man and one (1) woman from these recommendations to be submitted to the Convention as nominees for these positions. Nominations from the floor shall be allowed only for candidates recommended by at least three (3) districts, or by petition signed by delegates equal in number to at least twenty percent (20{997ab4c1e65fa660c64e6dfea23d436a73c89d6254ad3ae72f887cf583448986}) of the convention voting strength. In the event of a vacancy in the office of National Committeeman or Committeewoman the vacancy shall be filled by a majority vote of the State Republican Executive Committee to serve until the next biennial state convention.

Texas Rule 40 should not be confused with RNC Rule 40b, which was enacted in 2012 to keep Ron Paul off the ballot. Morten Blackwell, member of the standing RNC rules committee, explains in a RedState piece how lawyers from the party misled and blocked his attempts to oppose the 40b rule. In 2012, this was a big fight between party establishment types and the Ron Paul loyalists. Now, four years later, it is amazing how a perceived defeat can be a larger moral victory.

Rule 40b “stops votes from being counted for candidates who could not prove majority support from at least eight state delegations. It also mandates that candidates meet the eight-state threshold “not less than one (1) hour prior to the placing of the names of candidates for nomination pursuant to this rule and the established order of business.” This rule was put into place to help Mitt Romney in 2012. Oh, how the mighty have fallen. D.C. emergency rooms are full of establishment Republicans in “not Cruz, never Trump” stupors. Dr. Armstrong thinks he has a cure.

Dr. Armstrong’s campaign is interesting because it seeks to unite both Trump and Cruz supporters against any attempt to remove rule 40b from the plank. All politics is local, right? What is more local than Harris County resident Ted Cruz teaming with Trumpsters to defeat the establishment who created Rule 40b just four years ago.

Dr. Armstrong stated he would work with Trump delegates to prevent any attempt to remove 40b. At the time of Dr. Armstrong’s presentation, only Trump had acquired the required amount of delegates to qualify under 40b. Not so for Cruz and Kasich.

Armstrong told the crowd that he believed Cruz would obtain the requisite amount of eight state delegates, which he did the next day. Dr. Armstrong’s tactic is also a very good way to appeal to Trump delegates at the state convention, all the while, being a Cruz supporter.

As a medical doctor, Dr. Armstrong is no dummy. The bigger question is whether he is the right guy to make the argument or do we need someone with a more persuasive non-medical skill set to represent Harris County and Texas on the Rules Committee.

Notice that I said Harris County because the top of the ticket will greatly impact local candidates. One judge on the November ballot recently said that he thought a Trump nomination could doom the entire Harris County republican ticket. I am not sure that I agree; but, the fear is real with elected officials. The “Never Trump” and “Never Cruz” campaigns are divisive and hurt current republican office holders, no doubt. My advice would be to start the “NEVER HILLARY” or “NEVER BERNIE” campaigns right where you are standing. The problem is exacerbated because Cruz is from Harris County. Republicans have other problems with the local ticket. Dr. Armstrong’s tactic is clever but I am not sure that it will work.

If you want to fire up a crowd, there isn’t a better politician in Texas than Gov. Rick Perry. I wish all of those members of the Texas political media would back away from their desks and get out and see him in action. If they did, they wouldn’t be prognosticating that his career as a politician is finished – remember back in May when I said the same thing? This afternoon in Friendswood, he rallied Republicans in support of Rep. Randy Weber’s bid to replace the retiring US Rep. Ron Paul and in the process, reaffirmed my impression from five months ago.

A crowd of roughly one hundred people came out on a gorgeous afternoon to support Rep. Weber and, of course, to get their picture taken with Gov. Perry. State Rep. Larry Taylor, soon to be State Sen. Larry Taylor, introduced Weber with a solid endorsement. After a few short remarks, Weber introduced the star of the show, Gov. Perry. Gov. Perry was in fine form and tuned into this crowd, highlighting Rep. Weber’s fiscal conservatism, his support of pro-life issues, his recognition of the 10th amendment, and most important, his commitment to laying a foundation for job creation. Gov. Perry talked about Barack Obama’s misunderstanding that government creates jobs instead of understanding that private business does. He also talked about the Obama administration blocking the Keystone pipeline and the EPA’s attempt at “flexible permitting”, which he says will cost Texas and our area in particular hundreds of thousands of jobs. Gov. Perry hit Nick Lampson on all of these issues, his tone and words sharp and biting, especially on abortion.

Gov. Perry acknowledged that Texas is a safe Romney state but exhorted the crowd to get out and vote anyway. Texas needs to send a message, letting the rest of the nation know that we are informed, engaged, and ready to turn this country around.

Obviously, this is a tight race, otherwise Ted Cruz, John Cornyn, and Rick Perry would be spending time helping someone else. It’d be a shame to lose this seat to Nick Lampson – a slick union guy that masquerades as a conservative, blue dog Democrat. That narrative is plainly false – you cannot vote for Nancy Pelosi and her act and still claim to be conservative in any shape, form, or fashion. If you live in that district, do yourself and your neighbors a favor and help this campaign.

Pictures from the rally: