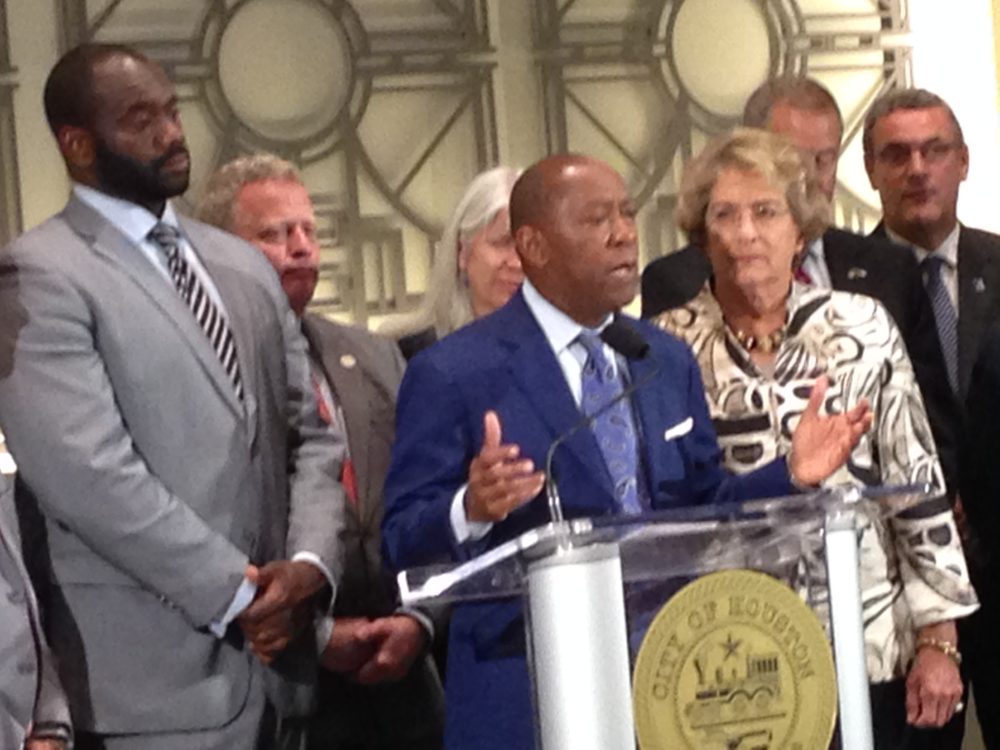 There is no question that the 2016 election will be talked about for many years to come. This election is unusual for several reasons and the candidacy of Donald Trump has added more stress for Harris County elected officials and candidates. Paul Simpson is doing the greatest Kabuki dance of all time trying to support what is arguably the worst field of candidates in Harris County history. Folks like Devon Anderson, Mary Lou Keel, Mike Sullivan, and Jim Murphy must give every true conservative on the ballot this election cycle tremendous heartburn. At this point, full panic mode is setting in. If you notice, Paul Simpson does not have one nice thing to say about Donald Trump and let me tell you why.

You cannot understand the 2016 race without looking at the 2014 election of Paul Simpson. In that election, Simpson was supported by a coalition of institutional, big government, pro-immigration, establishment Republicans who teamed up with Libertarians and Log Cabin Republicans to defeat Jared Woodfill.  Another group of supporters bought into the fallacy that the defeat of Woodfill will bring down the “pay to play” guys (i.e., Hotze, Lowry, and Polland). Of course, the real goal for many Simpson sympathizers was to replace the so called “pay to play” slates with their own “pay to play” slates. Allen Blakemore, of course, has his hand in both camps. See Wayne Smith’s primary defeat.

Simpson’s supporter list prohibits him from supporting Trump. Dick Weekley, a big Simpson financial supporter, would punish Paul if he even thought of supporting or helping Trump. Sad but true. It is important to remember that these folks are dependent on cheap foreign labor for their businesses to succeed. This need is juxtaposed against the Trump Train and Mr. Trump’s strong stance against illegal immigration and wasteful government spending. Weekley is not alone and a coalition of political economic opportunists have set their sights on Harris County – the biggest prize in contracting in the state.

The Cruz pity party adds to the crosscurrents of the local political outlook. When Trump defeated Cruz in the Presidential primary, many Cruz supporters in Harris County were disappointed and angry at Trump. Ironically enough, Cruz and Simpson share many supporters. How can Cruz, a man who claims to value the United States Constitution and the legacy of Mr. Justice Scalia, be so shortsighted? What will Cruz say if Hillary is elected and Justice Scalia’s legacy is tarnished by a very liberal court? Cruz and his hurt feelings do not bode well for down-ballot races in Harris County. Cruz’s failure to endorse Donald Trump at the Republican National Convention in Cleveland hurt Harris County Republicans.

Then, we have Devon Anderson as the District Attorney candidate. Devon’s problems have been well documented by me, David Jennings, The Houston Chronicle, Jace Larson of Channel 2, and just about every news organization in the country. Devon’s problem is the other battlefront in the conservative movement – social conservatives. Devon Anderson’s indictment and prosecution of David Daleiden and Sandra Merritt set off a political firestorm within the pro-life movement. The damage done to the pro-life movement nationally by Devon’s actions may well cost many Harris County Republicans this November. Devon Anderson to this day does not understand the damage she caused the pro-life movement. Social conservatives are rightfully angered by her mere presence on the ballot. See Dr. Hotze’s email to Devon et al. from Saturday night.

The fact that our local party officials are running away from Donald Trump is a disaster in the making. When you see Jim Murphy standing with Sylvester Turner supporting Turner’s pension reform plan, Harris County has a problem. Simpson did not want to involve himself with Devon Anderson and the indictment of Daleiden and all candidates will pay a price. With Simpson at the helm, the local party does not stand for life or fiscal conservatism. The pro-immigration issue is not helping much either. Simpson’s Muslim pep rally and recent carnival were symbolic of the utter failure of the local party. Simpson’s reliance on establishment money creates a well-funded local party, but one devoid of principle. The new mantra is pro-life is taboo and fiscal conservatism does not align with their big government contracts.

It kind of makes me miss Jared.