The judicial and district attorney soft on crime aspects in Harris County has received significant coverage, but one aspect that hasn’t been covered is the effort by democrat elected officials to weaken law enforcement in Harris County.  While the effort’s pieces were all in the open, the cumulative effect didn’t sink in until reflecting on the information learned when Joe Danna and Ted Heap were kind enough to come in for an interview.  When viewing the current elected Democrats’ behavior through the lens of information learned in those interviews the picture seems much more ominous.

Extent of the crime problem

While various entities may report on the crime rate this number is skewed by the district attorney’s office willingness to accept a case.  A different metric to use to judge the amount of reported crime is the crime incidence number.  It is a measurement of the number of times a person has called to report a crime and a law enforcement response followed. This metric does not consider if the district attorney’s office accepts the charge or the number of counts involved.

Houston Police Department has published this metric for January – August 2020, and for comparison purposes the same month range for 2019 is given in the chart below. What’s striking in the chart is every month in 2020 shows a year over year increase from 2019.  While the official crime statistics may show a decline in criminal activity if we look at the incident report we see that crime reports are consistently up.  This shows that the public is reporting more crime and that the lower crime statistics are the result of cases not being referred to or accepted by the district attorney’s office.  A better way to say this is to say criminal prosecution is down, but criminal activity has increased. 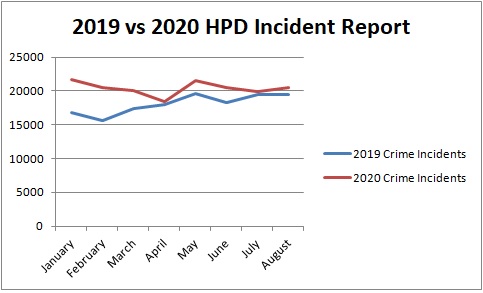 The effort to weaken law enforcement

The democrats appear to be actively involved with an effort to weaken law enforcement.  Whether or not this is a coordinated effort is immaterial – the effort is pervasive and will result in a further escalation of criminal activity.  Here are a few highlights, and the next section will explain why these efforts are detrimental to combating crime.

Right now Harris County Sherriff’s Office has funding and approval for an additional 101 positions.  Ed Gonzalez could have filled these positions at any time, but has made a deliberate decision not to fill the positions.  Adrian Garcia suggested an effort to end the constable contract program in favor of the sheriff contract program.  Rodney Ellis has called bringing attention to the consequences of the weak on crime criminal judges and bail issues fear mongering.

The consequences of the three examples given above are/would be devastating for curtailing crime in Harris County.  Ed Gonzalez’ refusal to fill 101 positions is self evident in how it is criminal friendly and prevents law enforcement intervention in criminal matters. Not facially evident is the effect from the other two examples.

The switching from constable to HCSO contracts would create the false appearance of a drop in crime in Houston because of the technical aspects of the way the reporting is compiled.  Plus, the transition from constable to HCSO has the inherent risk of inability to service the contracts and risk of contract nonrenewal since it is a new entity that is performing the duties of the contract program.  In short, less law enforcement investigation would occur, especially with property crime, and criminals would have even less reason to fear committing these crimes.

More sinister is Rodney Ellis’ comments that exposing the problems associated with bail reform is fear mongering.  Right now the suit that Commissioner’s Court is involved with settling is misdemeanor bail reform.  Felony bail reform will be addressed next, and a reasonable inference from Ellis’ comments is that he will be actively advocating for criminal friendly bail provisions in the settlement for the felony bail reform. Remember, if this is the result of litigation and an agreed judgment then we are stuck with the consequences.  A future Commissioner’s Court would not be able to change operating procedures since there will be a legal judgment in place.

We have a stark choice in the election

The election is a stark choice between reigning in crime and the continued slide into lawlessness in Harris County.  It’s imperative that Ramsey win election for Commissioner’s Court so we have an active voice to combat Ellis and Garcia and expose the process to sunlight.  It’s also extremely important that Joe Danna be elected as Sheriff so that the office can be fully staffed and be actively involved in combating crime.   That’s not enough to protect the public.  It’s also important Mary Nan Huffman be elected so that we have a district attorney who will actually prosecute crimes.  Voting republican for Commissioner’s Court, Sheriff and District Attorney are necessary to start the process of reigning in criminal behavior in Harris County.

Joe Danna was kind enough to agree to be interviewed regarding his race for Sherriff.  Running against an incumbent Democrat in this election cycle is a difficult proposition, and he is to be commended for taking the time, effort, and expense of this uphill battle.  This interview focused on what his vision for the Sherriff’s office looks like, and how will he differ from the current incumbent.

He indicated that his priorities are taking politics out of the office, filling budgeted but unfilled positions within the office, and making sure the bad officers are identified and removed from the office.  He believes these steps will lead to better community relations and better service to the public.  To understand how all of this impacts law enforcement and the Sherriff’s office it’s best to start with an overview of the overall political climate.

It’s been discussed ad nauseam, but we live in a time where we have a soft on crime District Attorney, and criminal court judges are criminal friendly.  Criminals don’t fear committing crime, and he pointed out how this has the effect of having criminals from outside the county coming into Harris County to commit crime since the criminal justice system has become so criminal friendly.  It’s a deliberate calculation – crime is a safer proposition in Harris County than in the surrounding counties so they come here to commit crime.  Not only does this create a greater danger to the citizens of the county, but it also demoralizes law enforcement especially in the overall context of the Democratic party’s hostility towards law enforcement in general.  This, in turn, has lead to negative public safety and public service impacts.  He noted that the average response time for a hit and run, which if injuries are involved is at least a state jail felony, is four hours.

To address these concerns he has a plan to take politics out of the office and to fundamentally change the organizational structure to improve functioning of the office.  The organizational structure would change to where five individuals in the office would answer to him directly; they would have five individuals answer to them, and so on.  This decentralizes the power at the top of the organizational chart, and improves communication by eliminating bottlenecks with communication.  This also leaves a clearer picture of where responsibilities lie and how to address issues that arise.  From a decision making standpoint he wants to make decisions from a good of the Sherriff’s office prism with the belief that a happy functioning department will be better able to serve the public.

He was concerned about the various efforts to centralize power and staffing of the Sherriff’s office.  Adrian Garcia has proposed a plan that would have eliminated the Constable contract program and assumed it under the Sherriff’s office.  He believes this is a bad idea.  Although the idea was withdrawn by Commissioner Garcia the intent was clear – centralize the program under the Sherriff’s office.  This plan is especially concerning since the office is understaffed.  He noted that right now 101 budgeted and approved positions are vacant.  The failure to fill these positions seems like an under the table way to defund the office, and with Commissioner Garcia’s attempt to divert the Constable contract program to the Sherriff’s office this seems like a coordinated effort to decrease law enforcement effectiveness and weaken law enforcement’s capabilities to address crime.

The last area we covered is how his office could better enhance public safety if he is elected. In addition to filling the 101 positions noted above, he felt it was important to build better to build community relationships. He said this starts by making sure HCSO treats everyone equally regardless of race, gender, ideology, or the number of contacts they have had with law enforcement.  Each contact is a new contact and everyone in the county is on equal footing when they reach out to the Sherriff’s office for assistance.  Building community relationships is important because he noted that people tend to not get involved unless they are a victim, and cited Mothers Against Drunk Driving and Texas Equasearch as examples.  Building community relationships takes time, especially in this current political climate, and in the meantime he felt that immediate actions he could take are reallocating resources to areas of need – human trafficking only has three people assigned to the division – and to accept calls and investigate crimes that Houston Police Department is unable to investigate since the Sherriff’s office has jurisdiction county wide.  He also noted a willingness to actively identify and remove bad officers whether it’s 0.001% or 10% of the force.

The overall impression he left was that he would change the focus of the office.  Rather than politically oriented he would be office and public safety oriented.  Reallocation of resources to meet the current needs of public safety and filling the 101 available and funded positions alone would help to increase public safety.  The willingness to remove bad officers, and desire to treat each call and every individual on a clean slate every call should give comfort to the entire community.  The willingness to investigate crimes the Houston Police Department is unable to allocate resources to investigate will help to make sure everyone can receive assistance if they reach out for help.  All of this is especially important in our current political climate where criminals feel that it is safer to come to Harris County to engage in criminal behavior than to conduct crime in their own areas.