A special commissioner appointed to hear condemnation proceedings related to property owned by Buc-ee’s for expansion of the Fort Bend County Grand Parkway Toll Road was alleged by Buc-ee’s to be unqualified to serve on the three-member panel.

Documents on file with the Fort Bend County District Clerk reveal Buc-ee’s Ltd objected to a $1,491,285.00 award of the special commissioners who heard the property condemnation proceedings in part because the award was made with an unqualified individual serving as a Special Commissioner.

“ the judge of a court in which a condemnation petition is filed or to which an eminent domain case is assigned shall appoint three disinterested real property owners who reside in the county as special commissioners to assess the damages of the owner of the property being condemned.”

Buc-ee’s Ltd believed Stanley Philip, one of the three special commissioners appointed by Fort Bend County Court at Law 5 Judge Toni Rencher Wallace, was not qualified to serve on the panel. In court documents, representatives of Buc-ee’s claimed they were unable to locate records indicating Stanley Philip owned real property in Fort Bend County (16-CCV-056484 dated April 14, 2016) as required by Section 21.014 of the Texas Property Code.

An affidavit filed in connection with the proceeding revealed an attorney of one of the law firms representing Buc-ee’s Ltd spoke with Mr. Philip by phone in an attempt to verify Mr. Philips real property ownership in the County.

“In an effort to verify or refute the findings of my searches, I called Mr. Philip on March 31, 2016 to inquire whether he owns any real property in Fort Bend County. Mr. Philip became very defensive during the course of the conversation and referred me to the public records. When I indicated that it is our standard practice to investigate and ensure the qualifications of special commissioners and the lack of public records is what necessitated the call Mr. Philip became very angry.

I attempted to reassure Mr. Philip that this was not a personal attack, and I was just seeking personal information from him, as public records are often incomplete or inaccurate; however, this reassurance was to no avail. I again asked Mr. Philip if he owns real property in Fort Bend County, at which point he again directed me to the public record, declined to answer further, and hung up on me.”

Although it’s unclear social media accounts sure suggest as much. 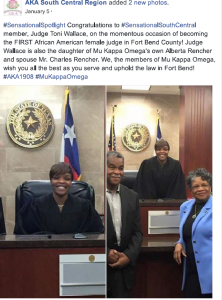 –and I found this photo of Charles Rencher at a 2003 ground-breaking ceremony to launch the Fort Bend Parkway Toll Road.

What is the connection between Judge Wallace and Stanley Philip?