You are here: Home / Politics / Harris County / Special Session and the Governorship 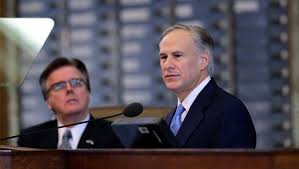 Competition is a good thing and when you have two conservatives vying to be governor, it could be really good. Abbott is described by one Texas lawmaker as scheduling a “conservative home run derby” with the announced special session. The winner will be conservatives all over Texas who have waited for years for such an opportunity. Governor Abbott is playing catch up with Republican primary voters and Abbott’s 20 item special session is his way of getting ahead of Dan Patrick. Two questions remain: (1) will it succeed and (2) will the mainstream media recognize the subtlety.

Democrats have wrongly accused Governor Abbott of becoming unhinged based on the content of his special session call. Democrats see Abbott’s conservative call as a liberal disaster. What they do not see is that Lieutenant Governor Dan Patrick is planning to run against Abbott. Lt. Dan has been planning this since at least November 2016 when he and his political consultant Allen Blakemore openly discussed the opportunity at the Harris County Republican Party election night watch party. When all countywide republicans were defeated in one fell swoop in Harris County, Patrick saw opportunity.

Planning and success in politics requires opportunities, not unlike the business world. Darrell Royal once said, “Luck is what happens when preparation meets opportunity.” Sports metaphors work in politics too.

When Dan Patrick wakes up in the morning, he sees the President of the United States in the mirror, not the Lieutenant Governor of Texas. Lt. Dan sees the Governor’s Mansion as his next step to the presidency. The governorship of Texas provides a very important fundraising platform. While only thirteen presidents served as governors, four of the six latest presidents were governors: Jimmy Carter (Georgia), Ronald Reagan (California), Bill Clinton (Arkansas), and George W. Bush (Texas).

Lt. Dan’s plan requires getting rid of Governor Abbott. Patrick’s team has already begun to portray Governor Abbott as a nice enough guy, but someone who is not moving the conservative agenda forward. If you are active in Republican circles you have heard Patrick’s “Abbott has failed to show leadership” narrative. Governor Abbott is behind because he actually believed Patrick when he said that he would not run against Abbott.

This plan is being executed on a number of fronts. The bathroom bill was nothing more than a ruse

to put Lt. Dan to the right of the Governor, and to get back into the good graces of Steve Hotze. The quest is to win over Republican primary voters. This will confound the Texas media. Most of the media that covers statewide politics covers it from the prism of Austin. This is the last place this fight will occur. Conservative enclaves in Houston, Dallas, Fort Worth, and San Antonio are about to be wined and dined in a way we haven’t seen in quite some time. Lt. Dan has been on a statewide tour explaining his great leadership skills.

The orchestration of the death of the sunset bill was by design. This was done to bait Abbott into calling a special session and the Texas Freedom Caucus was used by Patrick to further his agenda. Don’t get me wrong, the Texas Freedom Caucus is a group of  liberty and freedom loving patriots who are all about smaller government, but they need to be careful of Lt. Dan as well. Watching Lt. Dan throw every Houston taxpayer under the bus on the pension bill should be a cautionary tale to all.

Before he killed the sunset bill, Lt. Dan had to wait until the pension bill (SB 2190) passed the house so his law enforcement union friends (e.g., HPOU) would continue to support him and line his pockets. Patrick has always closely aligned himself with this union, which handed out more money to legislators this session than Donald J. Trump trying to get a building built in Manhattan. I hope that Governor Abbott was smart enough to cut a deal of his own before he signed this horrific legislation. Once the pension bill passed, Abbott and Straus played into Patrick’s hands – now it will be a fight.

One winner in this fight: Texas conservatives. Strong conservative legislation makes folks choose sides. This will not be good for Straus and his Republican henchman. Republican primary voters are about to learn a lot about their state representatives. Speaker Straus and his liberal house leadership, including his democratic committee chairman, are about to be whipsawed in a way not seen in these parts in a long time. Straus is unlikely to survive and the heat of the July Texas special session summer will burn through until the Republican primary.

Governor Abbott finally woke up to realize that Patrick was putting him in a corner and Abbott is fighting back with his special session call. Folks forget that your opponent gets to throw punches too. It is great to see the governor fighting back and doing his best to prove his conservative bona fides. Again, conservatives for the win.

This game is probably over for now and (unfortunately) Lt. Dan will have an advantage in a 2018 Republican primary against Abbott. Remember, the goal is for Lt. Dan to be in position to primary Donald Trump in 2020 or step into his shoes if something should happen. I was reminded of Dan Patrick’s press conference to announce that he was not running for governor. I was also reminded that Kay Bailey Hutchison denied 18 times (six times on television) that she was running against Rick Perry before she did.

Competition is a good and the real winners here will be conservatives. We need more conservative competition for ideas in Texas and nationally, it is healthy for our Republic.