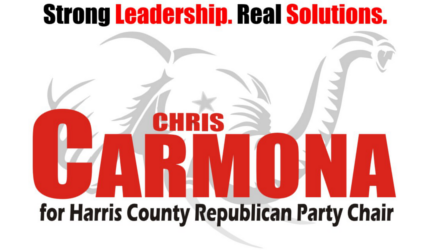 I believe the HCRP must establish a better media presence in Harris County. This is no simple fix, but in order to start winning again in Harris County, we need to begin somewhere.

Harris County is too big and the populace too varied to leave the communicating of our party to one person.

As such, we will develop a Speaker’s Bureau. This would be a group of people who are good at communicating the Republican message, and able to relay that message to various groups, whether they are college students, millennials, Spanish or Vietnamese speakers, members of the Indian community or any of the other plethora of people which make up our county. While communicating to the members of our party is good during our GOTV efforts, we can spend more time speaking to those outside our traditional base about why they should be with us, rather than simply hoping they vote against the other side.

New media and social media have opened up a wide array of new ways to communicate. It is time for HCRP to establish a real digital footprint. Facebook alone is not a strategy. Facebook for a personal campaign but not for a party operation is desperation, which is also not a strategy. There are bloggers left, right and center that are looking for people from our party to communicate a message to their readers. When we do not take advantage of these opportunities, we leave a void to be filled, and our opposition on the left is all too happy to take advantage of our mistakes, just as they did in 2016 when they won every countywide office in Harris County and Hillary Clinton defeated Donald Trump by over 12% in a state President Trump won by 9%.

We have to get off the fence and stop thinking rapid response is going to carry us to victory at any point ever again. Instead of constantly being on defense over our principles or our candidates, we should instead be on rapid offense, constantly moving forward highlighting our candidates and our officeholders, discussing big ideas, and demonstrating how our party can affect the lives of real people. This is a difficult concept for some of the people who prefer to keep doing the same thing that led us to defeat in 2016, but the right leader with the vision to drive forward can make this a reality and can get us back to winning ways in Harris County.

It is time to win again!