The 85th Legislature passed Senate Bill 1893, which was signed by Governor Abbott on June 15, 2017. This legislation creates the tenth and eleventh administrative judicial regions. The eleventh administrative judicial region is now composed of Brazoria, Fort Bend, Galveston, Harris, Matagorda, and Wharton counties. Prior to this legislation, these counties were

Very importantly, presiding judges have the authority to assign visiting judges. In August 2017, 29 separate visiting judge assignments were permitted in Harris County. This list includes Belinda Hill and Brock Thomas. Hill served as the First Assistant District Attorney for Mike and Devon Anderson and supported the decision to jail a sexual assault victim. After nine years at the Harris County District Attorney’s Office, Thomas, son of former Harris County Sheriff Tommy Thomas, was appointed to serve as judge of the 338th District Court. Thomas lost reelection in 2008 and started a law firm with Devon Anderson. Thomas won election to the 338th in 2012 and again lost reelection in 2016.

As you can see, the powers of the presiding judge are significant. Guess who has applied to serve as presiding judge of the newly created eleventh administrative judicial region? None other than Susan Brown – the judge who allowed her grand jury to be used for an unlawful purpose. If Governor Abbott choses to appoint Susan Brown to this position, he would send a terrible message to Texans.

Brown does not have the temperament for this position. Remember when she held a woman in contempt after the woman said, “Thank you, Jesus!” after her husband was acquitted? 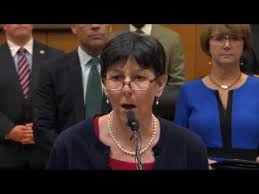 Abbott must remember the 185th Grand Jury and the fact that this grand jury was misused for a political purpose. Some folks may have forgotten that Marc Brown actually appeared before this grand jury. A group of folks worked together to get rid of District Attorney Pat Lykos. They couldn’t do it legitimately, so they created a fake controversy and used Susan Brown’s grand jury to generate deceitful headlines.

Brown, et al. has led the justice system in Harris County down the wrong path. After the 185th runaway grand jury episode, the criminal district court judges got together and elected Susan Brown to serve as the administrative judge of the criminal division. Think about that a minute. Brown’s grand jury is used for an unlawful purpose and then her fellow judges nominate her to serve as their representative. Under Brown’s leadership, the judges decided to hide the identities of their grand jurors. More importantly, in her leadership role Brown supported not releasing the Planned Parenthood grand jurors.

They plan to use United States District Judge Lee Rosenthal’s bond ruling to put the democrats on trial during the gubernatorial election season. The truth is that Brown and friends are on the wrong side of this decision. Instead of taking action to repair the broken bail system, Brown, et al. allowed this decision to be made. If they had made appropriate decisions, the issue would not have been ripe.

For many years, the Browns and friends have gotten by with these misdeeds, but the line must be drawn right now. Contact Governor Abbott right now to let him know that Susan Brown and any character from the old guard.