In CD2, Kevin Roberts and friends are starting to get desperate

Roberts sets up a website criticizing Dan Crenshaw for having a serious discussion about the future of Social Security and Medicare.

It’s been clear since Dan Crenshaw made the runoff in CD2 that the momentum was on his side. Obviously, Kevin Roberts and his sidekicks recognize this, so they bring out the big word – liberal. But…well, take a look for yourself. First the friendly Dr. Hotze and Mr. Woodfill let us know that Crenshaw is a big ol’ librul: 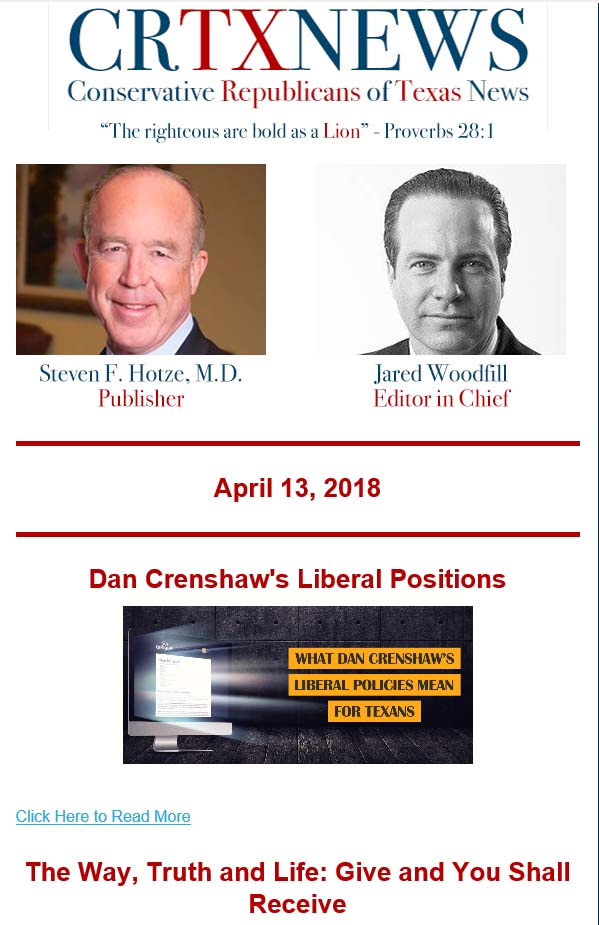 Those two righteous men are as bold as lions, don’t you know?

Now, let’s review those “liberal” positions of Dan Crenshaw: (or you can go to dansbiggovernmentplan.com)

We live in interesting times. Republicans USED to be in favor of controlling the costs of entitlement programs. Apparently that isn’t in vogue these days, instead we need to expand entitlements so that politicians can be elected.

So let’s take a look at what Crenshaw’s plans are.

Medicare – allow Medicare to negotiate drug prices like the VA does.

Sounds good to me. But for Kevin Roberts, Dr. Hotze and Mr. Woodfill, it is liberal to try and be fiscally conservative. Why, Medicare recipients have the RIGHT to demand name brand drugs regardless of the cost!

Transition Social Security to a pay-as-you-go and investment plan with private accounts.

Does that sound liberal to you? It is a fact that the Social Security system is getting top heavy with retirees vs active workers. Dan Crenshaw says, you know what? That’s a problem. Here is how we fix it. Liberal?

You want to know where Kevin Roberts stands on Medicare and Social Security? Well, you’re going to have to ask him because his campaign website doesn’t have a single reference to Social Security or Medicare. How about that? Old school Republicans might think a guy running for Congress should mention those very important issues.

You know what Kevin Roberts’ campaign website does have? Here are a few snippets:

Is this guy serious? I thought that he was but clearly he has taken a page from every establishment Republican playbook. Good grief.

Meanwhile, Dan Crenshaw is taking policy seriously and giving voters a clear look at what lies ahead.

Liberal? I don’t think so.

In Defense of James Dickey

Calling all barflys and covid protesters – time for duty!

The County Party is on the Verge of Becoming Irrelevant

Republican Party of Texas – Stupid Is as Stupid Does