You are here: Home / Uncategorized / How the Soft on Crime DA and Criminal Friendly Judges are Impacting Neighborhoods

Update: Four more gunshots tonight.  That’s three shootings in four nights in the same general area.  So far it’s been an hour since reporting the gunshots and no HPD response.

Update: It’s been two hours and forty-five minutes give or take, and it’s now 1:16 AM.  I am giving up and going to bed.

A vocal minority is turning criminals into celebrities.  Law enforcement was summoned to the Jacob Blake incident because he was violating a restraining order.  They were attempting to arrest him on an open warrant for sexual assault where he stuck his finger in his victim, smelled it, and commented it smells like you’ve been with other men.  (Page 2 of the embedded document) Professional sports teams are honoring this man and condemning law enforcement.  This has a long history tracing back to Mike Brown.  Remember, in the autopsy report it showed that Brown had a blood spatter inside the police cruiser with the wound at an upward angle, establishing his arm was inside the cruiser above the officer when he was shot – verifying the officer’s version of the events.

However, this piece isn’t to rehash the vocal minority celebrating criminals.  This piece looks at the other side of the equation – the victims when law enforcement makes the decision to write off an area.  In this case, it’s the edge of Sharpstown.  The past two nights have seen two different shootings on the street where I live.  Both have had posts on social media and establish what happens when law enforcement writes an area off.

This is the post regarding shooting one two nights ago. Notice the police activity in the back right.  The back center and left is the condos where I live with my unit off screen to the left.  Had I been in my driveway this would have been visible.  Gunshots are a regular occurrence out here.  We hear them on a monthly basis.  Whoever posted this image is obviously unhappy with Houston Police Department.  They didn’t even bother to investigate.  What happened the next night? 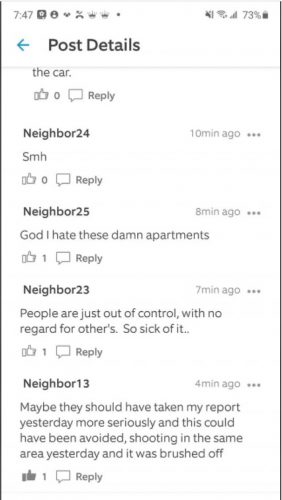 Shooting two happened the next night.  This shooting ended up with a fatality and media coverage.  Notice Neighbor13.  Is the neighbor correct?  Who knows, we have no idea if the two shootings are related or not.  However, we do know that HPD didn’t investigate a shooting on the same street the night before.  We can’t connect the dots because of HPD writing off the area.

The incident described in shooting one and brushing off crime isn’t unusual.  Twice I’ve been the victim of petty crime.  Twice I’ve called HPD to come out and pointed to the surveillance camera that recorded the crime.  Twice HPD hasn’t cared.  They didn’t even bother to talk to the people who own the camera or try to obtain the video.  Here’s the crime in one report:

Keying a car is petty criminal mischef.  However, when you point to the surveillance camera that captured the act occurring and HPD doesn’t bother to investigate then it’s no wonder crime persists.  Criminals know they can act with impunity.  The featured picture of the defaced Trump sticker could easily acted upon by HPD.  The incident occurred on the night of August 20-21, and the same surveillance camera pointed out to HPD twice before captured the event.  However, with the history of HPD not caring why bother to seek law enforcement involvement?  Criminals know HPD will not act.  This doesn’t just hold true for petty criminal mischief.  A vehicle robbery occurred in the same vicinity, and surveillance video exists.  HPD can’t compare the video of the robbery to the shooting and criminal mischief videos if they don’t try to obtain all the videos.

The broken window theory of law enforcement takes criticism for penalizing the poor and homeless.  The criticism has some merit, but it’s also hard to disagree with the results that come from the practice.  It works.  The question is how strike the correct balance.  Too much broken windows enforcement and you break down trust between police and the population.  Too little, and criminals know they are allowed to act with impunity.  One answer is holding a broken windows mentality for violations that threaten the health and safety of the community.  It’s not a big deal if someone jaywalks.

But what about parking in a fire lane?  Individuals in the vicinity park in fire lanes on a regular basis.  You send the city pictures, but nothing happens.  In fact, HPD drives past them to take the call for the criminal mischief and doesn’t bother to address the violation.  Demanding a minimum level of obedience to laws that are meant to protect health and safety isn’t an unreasonable expectation.

This is all evidence of HPD simply writing off the neighborhood.  That’s the end result of what happens when there’s significant black lives matter sympathy, a soft on crime district attorney, and a crop of criminal judges who are pro criminal as evidenced by the ongoing bond to murder spree take power.  However, that mentality also has negative consequences to law enforcement.

Neighbor13 appears unhappy with HPD, and understandably so.  Anyone in the area should be displeased that a shooting isn’t investigated.  Why call law enforcement when they obviously don’t care and aren’t going to even pretend to hide their disdain for the neighborhood? Just like minority communities don’t trust law enforcement a similar level of distrust is brewing with the run of the mill law abiding citizen in the neighborhood.  When HPD doesn’t even pretend to care or do the bare minimum investigation to try and solve crime why should anyone in the neighborhood trust them? This simply raises barriers to effective policing and police-community relations.

In the end, everyone loses.  The neighborhood already has lost because HPD has written them off. HPD will also lose, though, because if the neighborhoods don’t see any value in having them around there’s no reason to back the blue when they make requests or raise concerns.  Elections have consequences.  We are starting to see the deep dive societal consequences from the democrat control of the district attorney and criminal court judgeships.