Greg Travis: If we are to talk equity, then flood every home in Harris County for 14 days with seven feet of sewer water so it is truly equitable.

Greg Travis, Houston City Council Member District G, released a copy of a letter that he sent to Harris County Judge Lina Hidalgo about her statements on re-prioritizing the $2.5 billion in bonds that Harris County voters approved for flood control.

Click here to view a pdf of the letter. 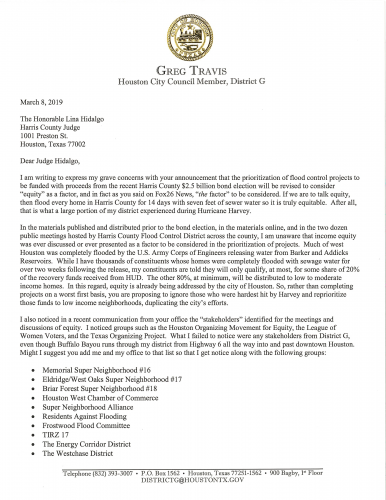 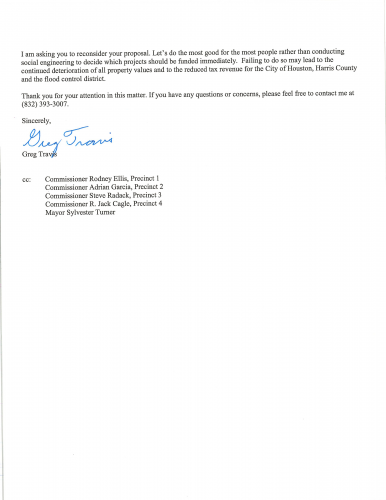 Good for council member Travis. I’m amazed at the lack of focus on this by Harris County Republicans, the Houston mayor, the current candidates for mayor and many others.

The best part of the letter from my perspective is this (emphasis mine)::

I also noticed in a recent communication from your office the “stakeholders” identified for the meetings and discussions of equity. I noticed groups such as the Houston Organizing Movement for Equity, the League of Women Voters, and the Texas Organizing Project. What I failed to notice were any stakeholders from District G, even though Buffalo Bayou runs through my district from Highway 6 all the way into and past downtown Houston.

Might I suggest you add me and my office to that list so that I get notice along with the following groups:

I am asking you to reconsider your proposal. Let’s do the most good for the most people rather than conducting social engineering to decide which projects should be funded immediately. Failing to do so may lead to the continued deterioration of all property values and to the reduced tax revenue for the City of Houston, Hands County and the flood control district.