Harris County Republicans are so diverse they attack diversity

The latest attack on Judge Theresa Chang claims that she performs gay weddings in secret.

by David Jennings
in Harris County
12

I’ve been curious all primary season long about the attacks on Judge Theresa Chang. Other than “she’s a terrible judge” from a couple of attorneys that don’t like her, no one has been able to explain why the pay-for-play slates have been opposed to her. The little fella put this in his Link Letter:

but said nothing about why he chose to “endorse” Erin Swanson over Theresa Chang.

Well, finally, we have a clue:

Now, I don’t know if Judge Chang performs gay weddings in secret or not. Nor do I care. It is legal after all and it isn’t like any judge that does officiate a wedding between two people of the same sex is forcing a heterosexual to marry a homosexual. Good grief I hate the marriage of religion and politics.

Where was this article placed, you ask? In something called the Houston Church News, a project of Phillip Paul Bryant. I don’t know how many people received it but it was mailed to “Resident” of at least one home. Mr. Bryant worked with Republicans to overturn Mayor Parker’s men in women’s restrooms edict. The resident that received the “newspaper” photographed it for me and I compiled it into a pdf –click here if you would like to see the entire mailer.

You will note an ad in the “newspaper” for Kevin Fulton for State Rep. I made a mistake earlier and attributed a donation to Mr. Fulton of $1,500 from Phillip Paul Bryant as an expenditure. Mr. Fulton says that he did not pay for an ad in the “newspaper”, even though the ad contains “pd for by Kevin Fulton for State Representative”. I apologize to Mr. Fulton and take him at his word that he did not pay to circulate this “newspaper”. He also told me that he is returning Mr. Bryant’s contribution. That is a stand up move by a good man.

And just to further the notion of diversity, Mr. Bryant mentioned on Facebook that 6 candidates “preferred to have the QLGBT support over a bunch of Black Christians”: 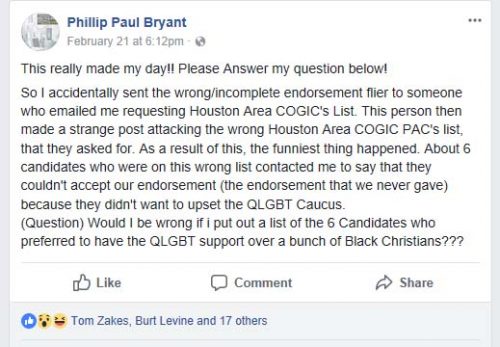 So how did one campaign operative that is employed by Republicans to help get out the vote respond?

In addition to being paid by Judge Sheri Y. Dean and Sen. Joan Huffman, Burt is besties with Rep. Ron Reynolds, who should be going to the big house any day now.

Does anyone really think that voters are going to run to the polls to support Republicans that resort to these tactics?

The best thing about that “newspaper”? It was reading that Erin Swanson was an “experienced trial attorney”. Folks, if that doesn’t make you laugh, nothing will.