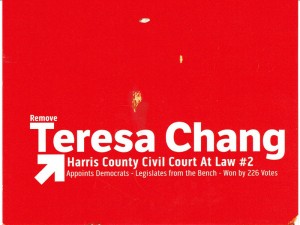 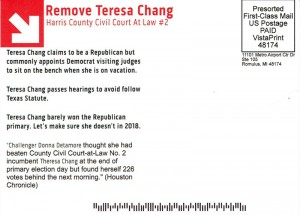 You can click those pictures to enlarge and read them.

Several things to point out:

So my guess is that the person or persons behind this mailer do not have a candidate that can run on their own merits, thus the need to try and tear down Judge Chang.

Any idea who mailed this? Or any idea who is interested in running against Judge Chang?

For what it’s worth, I supported her opponent, Donna Detamore, in the 2014 primary and thought that Donna had won when I went to bed that night, even sending her a congratulatory note. After the surprise results the next morning, I (and a few others) asked County Clerk Stan Stanart to walk us through the process of counting votes to make sure that no cheating had occurred. Having been satisfied that nothing untoward happened, I voted for Judge Chang in the General Election.

I haven’t heard anything to support the notion that Judge Chang is anything but a fair, efficient judge. Have you?

Sheesh, my eyes are bad. Judge Chang isn’t up until 2018 – and it says so on the mailer! Who in the heck would start attacking this early?

I guess the 2016 Harris County Republican Primary hasn’t started after all!