That’s the question in the race for Harris County District Attorney. Is the current DA, Devon Anderson, bigoted or simply another power hungry politician that will do anything to remain in power?

Yesterday, a very prominent local attorney sent a letter to Ms. Anderson asking her that question, which a reader sent to me. I reached out to the attorney and asked if I could reprint it. Why did I do that? Because I don’t know if it was meant to be private or not. Sure, I could publish it here but I try to be as fair as possible. As a certain presidential candidate would say, ‘BELIEVE ME’, you would recognize this attorney. If I hear back, I will identify the attorney. For now: 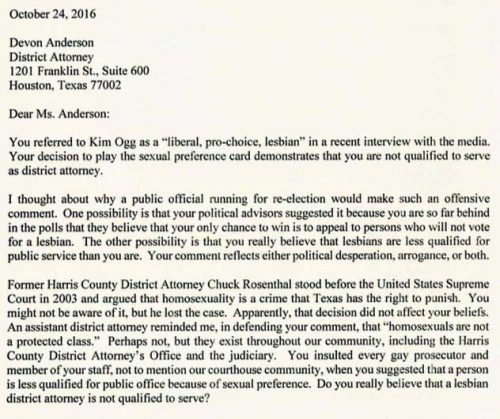 Devon Anderson is not bigoted

Although I don’t personally know Ms. Anderson, from what I have observed, she is not bigoted. After all, she has surrounded herself with members of the Houston gay community. I don’t think it is appropriate to mention all of them but certainly one stands out. That would be Ann Johnson, a very open member of that community and a former political candidate. Ms. Johnson is DA Anderson’s Human Trafficking specialist. And by all accounts, she is very good at what she does. So if Ms. Anderson was a bigot, it is hard to fathom that she would keep Ms. Johnson around.

Let’s face it. When a politician is forced into a corner, they will do anything to remain in power. And Devon Anderson is a politician. She lost her bench, as Judges say, in the Obama wave of 2008. And clearly she learned a lesson or three from her late husband – burn everything down and leave no reputation intact if you want to win. Which is why she retained her husband’s political consultant, Allen Blakemore and firm. Mr. Blakemore had this to say about Ms. Anderson’s comments:

“Her sexual orientation is not new or newsworthy,” said Allen Blakemore, who works for Anderson’s campaign. “She is married to a woman. She has said so publicly many, many times. This is calling you calling me a white male and me feigning outrage.” (click here to read the article on KHOU.com)

Okay, it isn’t new. True enough. And Blakemore looks to be a white male. His understudy has this to say:

Sara Kinney, a spokeswoman for Anderson’s campaign, said the incumbent’s comments about Ogg’s sexual orientation were being taken “completely taken out of context.” “She was talking about a conservative voter, why they would have problems with Kim Ogg as a district attorney,” Kinney said. “If someone is pro-traditional marriage, they’re going to have a problem with her being a lesbian. … It’s just a statement of facts. I appreciate your attempts to make it something more, but it just isn’t.” (click here to read the article on OutSmartMagazine.com)

So, you’re thinking, by golly, Big Jolly, Devon Anderson said she didn’t mean anything by it and has no problem with the gay community. And I believe her. Which is why I wasn’t surprised when she doubled down on it. Check out the Isiah Factor. This is what Desperate Devon had to say:

“Nothing has changed in this case. There’s no new witness. There’s not one shred of new evidence. This decision could have been made five days after he was arrested,” Looney said. “This is just hellish prosecutorial abuse.” (click here to read the article on HoustonChronicle.com)

I did get permission. And I did tell you that you would know who he was.