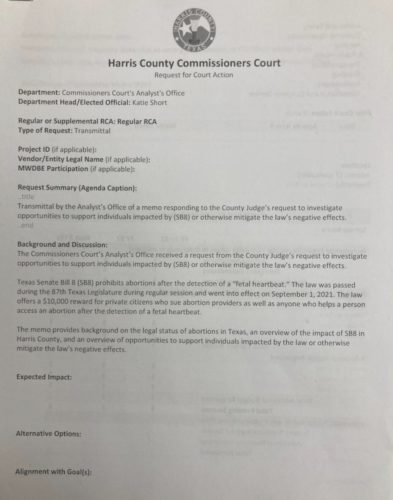 In September 2020 there were 4,313 abortions in Texas.  In September 2021 that number dropped to 2,164.  This is because of the Heartbeat law.  Later today Commissioner’s Court is set to take up ways to circumvent the Heartbeat law, courtesy of a request, “responding to the County Judge’s request to investigate opportunities to support individuals impacted by (SB8) or otherwise mitigate the law’s negative effects.”  Judge Hidalgo appears to be paving the way to use our tax dollars to pay to transport women who want an abortion out of state so they can have the abortion.

The “opportunity” not only says pay for transportation, but also for childcare and lodging for those seeking an abortion. 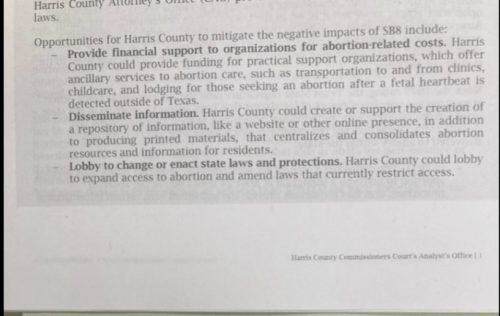 The timing of this action is especially puzzling if it is truly an attempt to combat the Heartbeat law.  Outside of the Supreme Court decision upholding the law as a matter of federal Constitutional law an attack against the enforcement mechanism is being waged in the state courts.  This attack is based on the Texas Constitution, and it recently had some success in Travis County.  The state constitution Article I, Section 13, in pertinent part, reads:

every person for an injury done him, in his lands, goods, person or reputation, shall have remedy by due course of law.

This argument was enough to have a court in Travis County find that parties could not petition the courts for enforcement since they did not have injury.  While the Texas Supreme Court is unlikely to agree the matter will still have to wind its way through the Third Court of Appeals, which will doubtless uphold the judge’s decision.  Even if ultimately unsuccessful, the ruling sets the pattern for judges across the state to temporarily halt the enforcement mechanism until the United States Supreme Court releases the Dobbs decision which will give clarity as to the future of abortion battles.

Judge Hidalgo’s request seems to be laying the framework to support abortion in a post Roe world should Dobbs go against the abortion providers.  This is especially concerning in light of the recent tax rate cut that has impacted the county health initiatives.  Indigent health care in Harris County is above average for the state, but it’s still woefully inadequate.  Every year I have clients die waiting on disability hearings that would be alive if better health care was available.  Rather than spend county resources to help those in need with healthcare Judge Hidalgo wants to spend tax dollars to pay for transportation, lodging, and childcare for those who want an abortion.

In a post Roe world, abortion doesn’t end.  Overturning Roe simply creates a logistical barrier to abortion since many states will still allow abortion.  The only inhibiting factor is how does the mother get to a state that allows abortions.  Judge Hidalgo wants to make sure that our tax dollars are used to overcome this logistical barrier.