You are here: Home / Politics / Harris County / About that "clear choice" in the Houston mayoral runoff

So the Houston Chronicle’s  Rebecca Elliott thinks that there are “clearly defined differences” in the City of Houston mayoral race. Interesting. I suppose there are some differences between the two but I seriously doubt that they are “clearly defined”. After all, Sylvester Turner was Speaker Pro-Tem of the Texas House under former Republican Speaker Tom Craddick, an ultra conservative. In fact, Craddick appointed Turner to the Legislative Budget Board. And as we all know, Bill King supports sanctuary cities, is against prayer in public, thinks that global warming is caused by humans, supports the “anchor baby interpretation of the 14th amendment, and supports Obamacare.

Yeah, lots of differences there. “Clearly defined” ones, eh Rebecca? But King’s team has decided to push that meme:

I think the first two replies speak for themselves.

I wonder if they will continue to support him with such fervor after this: 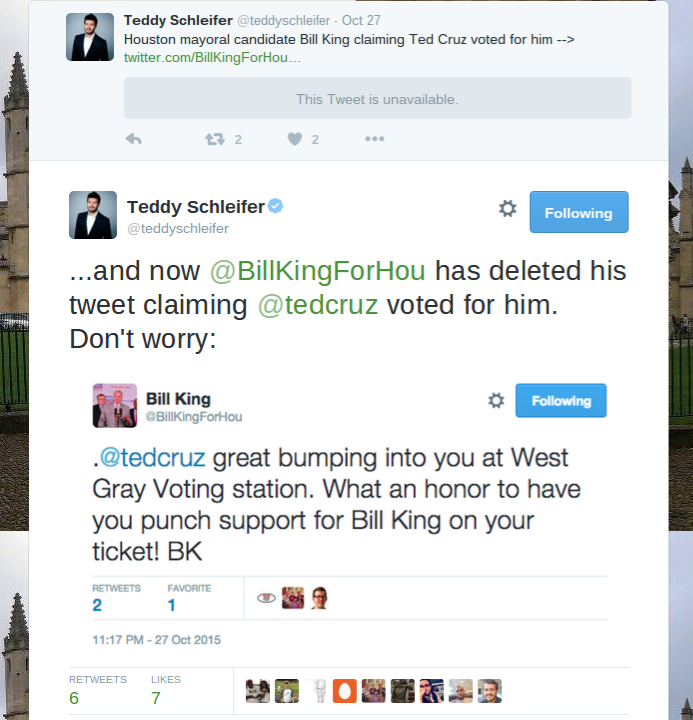 As the Kingwood Tea Party would say, King is a “principled conservative”.

Maybe we’ll all decide that voting for King is a marriage of convenience. Then again, maybe the folks of Houston will look at the actual records of the two candidates and vote accordingly.

All I know is that anyone with principles wouldn’t claim support of someone when they needed it and then delete it when they want to run away from it. Just sayin’.