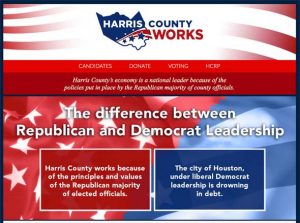 It’s deja vu all over again with the Harris County Republican Party. The disastrous results for the HCRP in the November 2016 election has invigorated the old guard and put the current regime in their crosshairs. Gary Polland fired a cannonball at Paul Simpson and Simpson responded in the most inappropriate way possible.

First, the cannonball. Somehow Polland convinced his decades long friend Fred Barnes to publish an article that I would go to Vegas and bet was written by Polland employee and former HCRP employee Marc Cowart. What are friends for, right?

There’s an untold story from the 2016 election that should encourage Democrats and worry Republicans. It happened in Houston, the nation’s fourth largest city in population and the hometown of former President George H. W. Bush. To be precise it’s Harris County, Texas—which consists mostly of Houston—that we’re talking about.

On November 8, Hillary Clinton lost Texas to Donald Trump by 9 percentage points. But she won Harris County by an astonishing 13 percentage points. And that’s not all. Republicans lost every county-wide race (including incumbents) and 24 of 24 judgeships. The son of Lt. Governor Dan Patrick was among Republican judges who were ousted.

For Republicans, it was literally a wipeout. Even so, that doesn’t quite capture how bad it was for them. The Democratic sweep underlined how rapidly the GOP is fading in Harris County, third population-wise among the nation’s counties. In 2012, Mitt Romney lost to Barack Obama by 971 votes. In 2016, Trump lost to Clinton by 161,511. She beat Trump by a larger margin than former Texas governor and President George W. Bush achieved in his two presidential campaigns.

The GOP’s suffering is all the more painful because of the false dawn provided by city’s 2014 ordinance that outlawed discrimination based on sexual orientation, “sexual identity,” and 13 other factors. The ordinance was challenged in a referendum in 2015 as opponents rallied around the battle cry of “no men in the women’s bathrooms.” That killed the ordinance. It lost by a whopping 61 percent to 39 percent, raising Republican hopes that Houston is more conservative than everyone thought.

Maybe it is, but Republicans haven’t benefitted from that. Gary Polland, a three-time Harris County Republican party chairman, can’t remember a time the GOP has done so poorly. “It could be back to the 60’s.” Jared Woodfill, who lost the chairmanship in 2014, does remember. “This is the worst defeat for Republicans in the 71-year history of Republican party of Harris County,” he said.

(click here to read the article by Fred “Marc Cowart” Barnes at WeeklyStandard.com)

Obviously, the facts relayed are true. Republicans got shellacked, no question about it. But the commentary isn’t exactly on target. An untold story? Sheesh, how many times do we have to tell it before Polland will say it’s been told already? Obviously we’ve gone over it here at BJP many times but the ‘untold story’ has also been told on Polland’s own Texas Conservative Review, Brietbart Texas, the Houston Chronicle, the Texas Tribune, the Washington Post, the New York Times and on every television station in Harris County. It was an astonishing, astounding, disastrous defeat. But untold?

It is interesting that Polland calls the defeat of the City of Houston bathroom ordinance a ‘false dawn’. If he’s right, what does Hotze, Woodfill, et. al. have to offer?

Let’s move to the end of the article because that is the meat of it:

And there it is. Polland can’t wait to elect a new chairman.

Okay, so that was the cannonball. Frankly, if you didn’t know Polland and you didn’t know the history of the Harris County Republican Party, which I suspect represent 99{997ab4c1e65fa660c64e6dfea23d436a73c89d6254ad3ae72f887cf583448986} of the readers of the Weekly Standard, you shrug and go on about your business. Unfortunately Paul Simpson took it personally and responded in the most inappropriate way possible.

“I was angry when I received a link to a fact-free story about our Party and the 2016 Harris County elections, allegedly written by Weekly Standard columnist Fred Barnes.  Mr. Barnes never contacted me or anyone who works with or for the Party before publishing this hit piece. It cited only two alleged direct sources: two former disgruntled county chairs who have seen their days as king-making profiteers coming to a close.  In an extremely difficult 2016 election environment that had anomalous results across the country, including Harris County – where millions of outside left-wing dollars poured into local races to elect Democrats –, Mr. Barnes’ sources never once volunteered to raise money for the Party, call a voter, or knock on a door.  Instead, a week before the election they laughed it up on a local cable access show hoping a wipe out would sweep their corrupt practices back to power.”

“If Fred Barnes had ever contacted me or the Harris County Republican Party to ask about the elections, he would have learned the Party did indeed support Donald Trump, along with every other Republican candidate on the ballot.  He would have learned the truth about what the Harris County GOP actually did in the 2016 campaign– not the inaccurate spin set out in his article.  More importantly, he would have learned what the Party is doing to win the battleground that is Harris County, including an in-depth strategic review announced last November.  If Mr. Barnes would have called, our grassroots army could have shown him how we are fighting back and organizing for the 2018 elections, growing the Party, equipping our army, and working closely with the Governor, Lt. Governor, Harris County Judge Ed Emmett, and others to ensure an effective operation.  We know the liberals from New York City, San Francisco, and Washington D.C. are not going to back down.  We will fight them for every vote in Harris County.”

When I say inappropriate, I’m talking about using official Harris County Republican Party resources (email list and website) to defend his honor because he was angry. When former HCRP Chair Jared Woodfill used the party email list for his campaign, I criticized him harshly and am not going to give Simpson a pass. What I see happening with the ‘new’ regime  is the exact same abuses of the ‘old’ regime. The ‘new’ regime simply has a different set of party insiders ready and willing to circumvent sound ethical practices to get their way.

As for Simpson’s argument, it simply falls flat. He and his team did not support Donald Trump. They did not use Trump’s issues. They did not run against Hillary Clinton. They got their asses kicked. No amount of wordsmithing or attacking Polland and Woodfill is going to change that. No amount of telling people how many calls you made, how many pieces of mail you sent or how many doors you knocked on is going to change that.

Simpson needs to stop trying to sugarcoat the disaster and just admit what every single Harris County Republican already knows – Republicans got whupped in Harris County. Then he needs to tell people what he is going to do different instead of telling people it would have been worse if the party hadn’t worked so hard. It couldn’t have been worse! Simpson needs to review what he wrote prior to being elected party chair.

There’s always tension between political activists, and their party’s candidates and officeholders.  Activists advance principles.  A party elects candidates.  But their interests have to be balanced.  A party that advances no principles is meaningless.  But a party that wins no elections is irrelevant.

Few people, other than the old guard, want to see another expensive, divisive, long, drawn out battle for HCRP Chair. It is a huge waste of resources, time and talent. Unfortunately, it looks like that is where we are headed and Simpson is playing right into the hands of the old guard with his thin skinned defensive posture.