You are here: Home / Politics / Harris County / Can Kathaleen Wall buy a seat in Congress and minimize the damage of slates in Harris County?

The race to replace retiring Rep. Ted Poe in CD-2 may have more ramifications in the race than simply electing a new Representative. There is an opportunity for Republicans in Harris County to move away from the pay-to-play slates that have dominated the Harris County Republican Party the past two decades, particularly the judicial races.

Ed Hubbard outlined the problem with the slate mailers in 2012 and over the years we have managed to decrease the influence of the three main ones. Unfortunately, the strategy of diluting their influence by creating more mailers might not have been the most effective strategy for getting more qualified candidates elected. For instance, the C Club, which does not accept money from candidates and which we have promoted for that reason, did not endorse a candidate in the race for Harris County Civil Court at Law 2. In that race, you have a very qualified incumbent being challenged by a wholly unqualified candidate by any stretch of the imagination. Just bizarre.

Which leads me back to the CD-2 race in which nine candidates are vying for the position. Most political handicappers are putting their money on a runoff between State Rep. Kevin Roberts and Kathaleen Wall. Roberts for his name recognition, community service and election to the Texas House and Wall for her past contributions to Republicans and the amount of money she is putting into the race.

The factor that is intriguing is that Roberts has the backing of the three main pay-to-play slates in Harris County, as well as the minor but still influential P.O.L.I.C.E., Inc. slate. I’m guessing that he picked up that backing long before Wall entered the race, otherwise the “endorsements” would be quite different. I’ll bet those guys are still kicking themselves for missing out on their share of the armored truck of money that will be thrown around by Wall.

One of the other candidates in the race, Rick Walker, has picked up on this and set up a page on Facebook called Compare TX-2 Candidates. Mr. Walker is probably handicapped in the number three or four position at this point. He is using that page to run Facebook advertising urging people to read Hubbard’s Curse of the slate mailers and we appreciate it! But he isn’t in the same ballpark with Kathaleen Wall when it comes to cash to spend.

But what if Kathaleen Wall decided to use a chunk of the money she is pouring into the race to fight the slates? Obviously, it would be targeted to CD-2 residents but she is pouring so much money into the race that she could slide a few dollars around the county and let voters know that instead of giving their votes to candidates that paid for “endorsements”, they should instead try to research the best candidates? After all, she paid $1,800 to rent a showhorse for a picture. And chartered a plane to bring in Lee Greenwood to her campaign kickoff and then paid him $25,000 to sing I’m proud to be an American. Think about the effect she could have on the HCRP primary if she put a $100 or $200 grand into an educational mailer about the abuses of the current pay-to-play slate system?

Hey, a guy can dream. And even though the idea of a candidate buying a congressional seat is repulsive to me, the tradeoff would be worth it in the long term. If she did that and if I lived in CD-2, I’d vote for her, principle be damned.

Besides, Republicans have needed someone to challenge Sheila Jackson Lee for photo ops at State of the Union speeches for years. At this year’s SOTU, she showed that she has the skills and contacts necessary to get major television time. Sitting next to the Korean dude that President Trump honored was genius! And priceless! 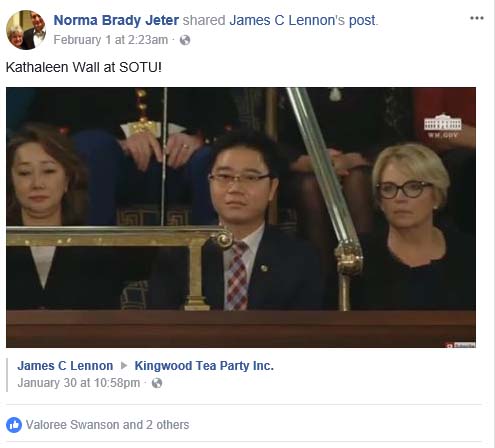 Lee Greenwood is leading the way in support of Kathaleen. This has been amazing night celebrating conservative values and Kathaleen Wall- a strong, conservative leader for CD 2. #GodBlessTheUSA #Kathaleen2018