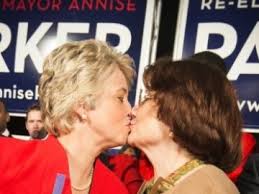 So, the Texas Supreme Court has slapped Mayor Parker again by granting Jared Woodfill’s latest mandamus. A mandamus is a direct order from a court to act. In this case, the court ordered her honor to rewrite the ballot language to follow the City Charter.

The per curiam opinion granting “yet another mandamus proceeding concerning the City of Houston’s equal rights ordinance” was written by the entire Texas Supreme Court, which is a message in itself. The court’s message is generally as follows:

Dear short timer, you and your lawyers are wrong and know nothing of the law. You may want to listen to Andy Taylor next time (like you did on the red light camera litigation) rather than arrogantly commenting on his hair.

Only Annise Parker’s angry lesbian politics can turn Steve Hotze and Dave Wilson into sympathetic characters. Six years ago, Parker won the election after she promised conservatives that she would not use the office to further her gay agenda. As a result, Annise Parker won every Republican precinct in the city over Gene Locke.  Parker insisted that fiscal responsibility was her primary focus.

Instead, Parker has spent the last six years doing exactly what she promised she wouldn’t do while destroying the finances of the City of Houston. I am not sure what she thinks she can accomplish beyond the actions of the United States Supreme Court. Now, gay folks can have judges at the family law center control their lives and the lives of their children. Great, I can’t wait for that shoe to fall.

Mayor Parker, those that supported you wanted you to straighten out the City’s finances and you have been a horrible disappointment. Please, go away! January 2016 cannot come fast enough.