Perhaps you were aware that Houston Mayor Annise Parker was investigated and no-billed by a Harris County Grand Jury in April of 2000 but I wasn’t. Here are several screen captures from the Harris County District Clerk’s office: 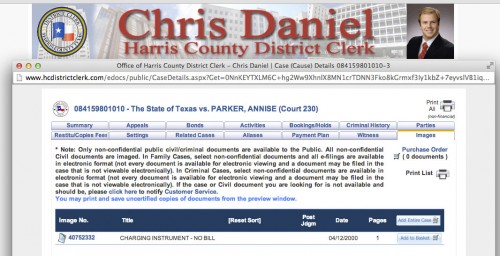 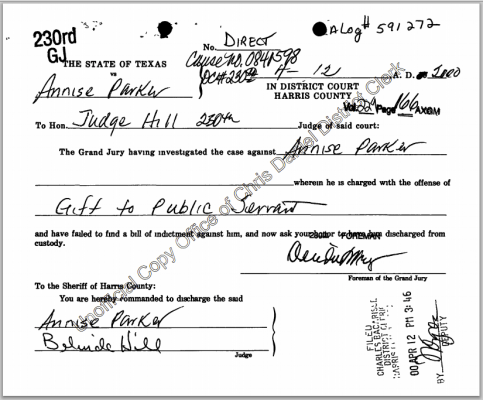 Now, it could be that I’m the only person in town that didn’t know this. But don’t you think it odd that in all of her elections, none of her opponents brought this up?

It raises a lot of questions, if I’m not the only person that didn’t know this.

Obviously Mayor Parker was no-billed, so my questions really aren’t about innocence or guilt. I’m just curious as to why I, and others that I’ve talked to, people that have run against her in the past, didn’t know about it. Perhaps you are a better researcher than I am, but I can find no mention of it anywhere, including in the hometown newspaper of record.

UPDATE: One long-time newsperson in Houston called to say that it might be related to this: http://bit.ly/19UFLeI – the timing is close anyway.

UPDATE 2: The Parker campaign provides a copy of an April 13, 2000 Houston Chronicle article about the allegation and the grand jury no-bill. Click here to view. Turns out the old newsperson was correct, it is related to the article linked above.