Earlier this year, my family went to a matinee showing of a summer blockbuster at Edwards Greenway. Before entering the theatre, the young ticket taker asked to search my wife’s purse. It really took us aback. Rachel very politely asked why the need to search her purse and the young man could only say that it was a new policy. Rachel then told him that she would be happy for him to look in her purse; but, politely explained that she has a concealed handgun permit that allows her to carry a concealed firearm and she was in fact carrying one in her purse. I find it interesting to see the reaction when people learn that she carries a firearm.

The young ticket taker became extremely nervous and said that guns were not allowed in the building. Rachel asked him about the location of the legally required 30.06 sign. He said that he could not answer any questions and suggested that we speak with the manager.

We walked over to the ticket booth to visit with the manager. Rachel explained the situation to the manager; but, the manager could only suggest that we bring the gun back to the car and then return to the theatre to enjoy our movie. Rachel asked for a refund and we left the theatre.

You see, there are a few problems with the manager’s reaction and the theatre’s “policy.” First, during this entire encounter, I stood there as a concealed license holder with a .45 on my hip under my shirt. So, the theatre’s “policy” discriminates against women by only searching women’s purses. Funny thing is that the three theatre shootings – Aurora, Nashville, and Lafayette – were all male shooters. So, the policy is fundamentally flawed. Second, the manager’s suggestion was to take the gun back to our car and return to the theatre for a two-hour movie. What do you think could happen during those two hours? Let me give you a hint with another story.

Last year, a series of car burglaries occurred in our area. One morning, a neighbor awoke to see that his truck was burglarized overnight. When we saw him that morning, he had a sickened look on his face. As we walked away, Rachel asked if I had noticed the look on his face. No. She guessed that he had a gun in the truck and that it had been stolen. Sure enough, when I later saw our neighbor, he said that his Kimber .45 was missing from his truck following the burglary.

“People have private transactions where they buy and sell guns in the parking lot. We have so many guns in our society in the hands of the wrong people. We need to do criminal justice reform, and we need stricter gun regulation. “

According to a 2014 HPD staffing study, 15,000 burglaries and thefts were not investigated in 2013. I suggest that the first step to preventing gun violence in Houston is to solve burglaries, especially when guns are stolen. Waller County Sheriff Glen Smith can explain all this to you as he allowed the theft of a Heckler & Koch MP5, submachine gun, to occur from his truck, parked at a Harris County restaurant. Note that I said he allowed – make no mistake it is his responsibility to secure this weapon from theft. Locking the MP5 in his truck is not securing the weapon. Sheriff Smith and Chief McClelland need to get together to discuss the impact of not investigating car burglaries in our community. I am curious; if a police officer is shot with Sheriff Smith’s MP5 does his governmental immunity shield him from a gross negligence claim?

As you likely know, on January 1, 2016, Texas law changed to allow persons with a handgun license to openly carry their holstered firearms – if you are familiar with the old law, think handgun license wherever concealed handgun license previously appeared in the statute. The hair on fire crowd is in full panic mode over open carry, but calming. The news media is out in force trying to find folks with a gun on their hip or shoulder. The media is currently focused on Brooks’ Place, a Cypress barbecue joint, which is offering discounts to people who legally carry handguns. One obvious error with the media coverage is the fact that individuals depicted with guns on their hips generally also have a badge displayed immediately next to their firearm. This is not a law change because law enforcement could always openly carry.

Almost simultaneously, President Obama announced gun reforms via his executive pen. As I watched his CNN special last evening, I could not help but notice the flaws in his argument. Basically, President Obama believes that an increased presence or availability of firearms equates to rising gun violence, including both homicide and suicide. This is a fundamentally flawed argument. Certainly, tragedies exist; however, a detailed examination must be made as to why each of these tragedies occurred. Fewer guns means fewer guns for the good people and that is why I am against these “reforms” but this article is not about Obama’s efforts. I want to discuss the increased dialogue about Texas laws.

Over the last several months, the mainstream media has amplified the discussion about carrying firearms in public; so, I think this is a good opportunity to discuss our firearms laws as they currently stand. The Texas concealed handgun law is rooted in history and Jerry Patterson has often spoken of the wrangling it took to get it passed. I invite you to click on the link to read Jerry’s words to the Austin American Statesman about the law and media misinformation.

As of January 1, 2016, individuals with a Texas concealed handgun license may openly carry their firearm in either a shoulder or belt holster only. License holders may still carry concealed.

The banned places are generally the same. The Legislature did pass HB 554, effective September 1, 2015, which addresses the issue of handguns at airport checkpoints. The new provision creates a defense for concealed carry license holders who accidentally possess a gun in their luggage. Now, the license holder may exit the airport area without being arrested. Common sense.

It became apparent over the last few months that the most common misconception concerning concealed (and open) carry involves churches. Most instructors state that concealed carry is not permitted in church and that would be inaccurate. According to Texas Penal Code § 46.035(b)(6):

on the premises of a church, synagogue, or other established place of religious worship.

What does this mean? Basically, a carry permit holder may carry a gun into a place of worship unless they have: 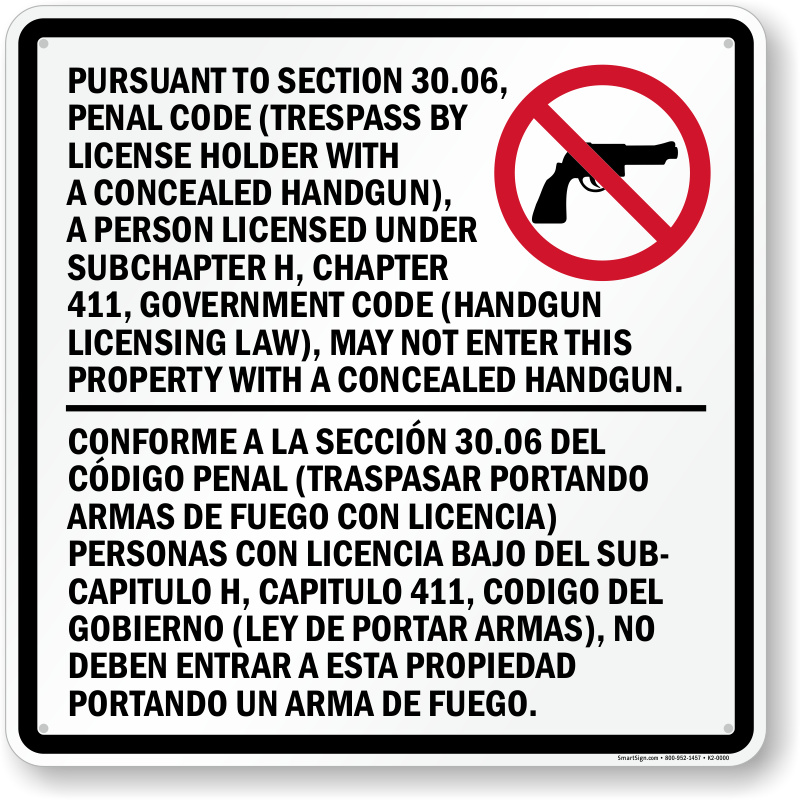 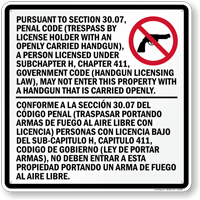 It is important to remember that the law was written to promote the licensed carry by law abiding gun owners who have passed a background check and proficiency test. You may want to check the policy at your place of worship.

The open carry stories will continue; but, I bet that you will observe few actually doing it. I believe that the 84,000,000 law-abiding firearm owners will soon have ammunition to say I told you so. Meanwhile, liberal anti-gun politicians will continue to say guns are dangerous as they are surrounded by secret service details carrying automatic weapons. Hopefully, local law enforcement’s resolution is to focus on solving burglaries – that would make us safer.