The mass power outage is a horrific event causing needless suffering. Just like with the aftermath of Hurricane Harvey we need to remove politics from the aftermath and focus more on learning lessons. However, unlike Harvey, this event was foreseeable. Locally we are having conditions similar to the 1989 and 1983 cold snaps, and ERCOT ordered rolling blackouts in February 2011. So, unlike Harvey, some degree of accountability is appropriate. Specifically, this looks like unaccountable bureaucrats failed to act in the interest of the public.

This mostly independent status also lets us look at adjacent grids for performance comparison. Midcontinent Independent System Operator (MISO) serves a sliver of east Texas, and while they had rolling blackouts, they largely recovered by Tuesday night. El Paso is in the Western Electricity Coordinating Counsel and they had no outages. The panhandle is in the Southwest Power Pool, and they also had rolling blackouts, but downgraded the alert at 12:31 PM CST on Tuesday.

In short, the grid failed not only on an absolute scale, but also compared to the adjacent energy grids.

How did it happen?

We had a systemic failure. The image below is a snapshot of generation facilities and their failures. Note that the failures exist regardless of the generation type.

While many people are trying to blame green energy the green portion of the grid is so small that it isn’t a major player in the current fiasco. The images below show two snapshots from today (February 17, 2021) noting the amount of green and thermal energy production. Green energy is neither the cause nor the solution to our current crisis. 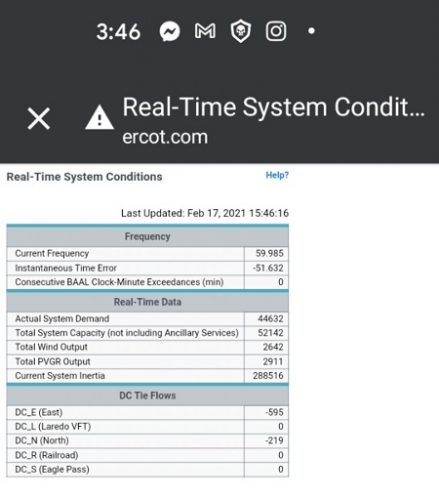 The systemic failure has many causes. A major cause is generation facilities, by choice, do not operate at full capacity in the winter. They are allowed to be in a state where they cannot readily come online in crisis since they are not appropriately winterized for quick operation in time of crisis. Another part of the problem is natural gas pipelines have frozen making supply an issue. Yes, windmills froze over and this lowered generation. All of these are preventable causes and the result of lack of preparation and relaguatory choice. Unaccountable bureaucrats brought us here. Which brings us to the question of who are the decision makers?

The Railroad Commission of Texas (Commission) is the state agency with primary regulatory jurisdiction over the oil and natural gas industry, pipeline transporters, natural gas and hazardous liquid pipeline industry, natural gas utilities, the LP-gas industry, and coal and uranium surface mining operations. The Commission exists under provisions of the Texas Constitution and exercises its statutory responsibilities under state and federal laws for regulation and enforcement of the state’s energy industries. The Commission also has regulatory and enforcement responsibilities under federal law including the Surface Coal Mining Control and Reclamation Act, Safe Drinking Water Act, Pipeline Safety Acts, Resource Conservation Recovery Act, and Clean Water Act.

According to the Public Utility Commission of Texas webpage:

The Public Utility Commission of Texas regulates the state’s electric, telecommunication, and water and sewer utilities, implements respective legislation, and offers customer assistance in resolving consumer complaints…. The PUC continues to perform its traditional regulatory function for electric transmission and distribution utilities across the state. Additionally, while integrated electric utilities outside of the ERCOT power grid remain fully regulated by the PUC, the PUC is increasingly involved in multi-state efforts to implement wholesale electric competitive market structures and transmission planning in the Southwest Power Pool (SPP) and Midcontinent Independent System Operator (MISO) areas.

It’s noteworthy the PUC itself notes “the ERCOT power grid remain[s] fully regulated by the PUC.” Another layer of unaccountable bureaucrats.

ERCOT is supposed to ensure reliability, but they have a different function. According to their webpage ERCOT, “Manages the flow of electric power to more than 26 million Texas customers.” To use an airport analogy ERCOT would be the air traffic control tower directing traffic and the individual energy generators would be the airplanes. As the control tower, ERCOT, has to operate by the PUC’s rules and dictate to the individual generators via delivery companies like Centerpoint. A third layer of unaccountable bureaucrats.

Lastly we have the individual generators. These are independent electricity generation companies.

What to look for at each layer after the fact

appointed by Governor Greg Abbott to the Interstate Oil and Gas Compact Commission (IOGCC) as the Official Representative of Texas. The IOGCC is one of the oldest and largest interstate compacts in the nation, formed over 80 years ago when several states joined together to resolve common issues in the industry without federal intervention.

These are statewide elected officials, and with the regulatory oversight responsibility the buck stops with them for the disaster that occurred. What to look for is what happened to the actual infrastructure that brings natural gas to the generation facilities, and how can this be corrected for a future event.

The PUC commissioners are appointed by Governor Abbott to six year terms. They have recently ordered ERCOT to retroactively raise rates in response to scarcity. They also “perform its traditional regulatory function for electric transmission and distribution utilities across the state.” Look for an explanation on why generators were allowed to operate in a manner that did not allow for them to rapidly come on line in a crisis. Also, look for how they justify retroactively raising prices – an artifact of their unaccountability and poor regulatory choices. This is going to cause electric retail companies to go belly up, and will forcibly transfer people to providers of last resort with severely elevated rates. Be on the lookout for if your provider goes out of business or offers you an opportunity to break your contract.

ERCOT is subject to the regulation from the PUC, but also deserves scrutiny. Specifically, how did ERCOT select who was subject to the rolling blackouts? Was it proportionally distributed across the state? While elected officials may try to blame ERCOT, they are a flow management entity. They need scrutiny about how the blackouts were handled, but not for why they occurred.

While the Railroad Commissioners are elected, the rest of the commission, PUC, and ERCOT are all unaccountable bureaucrats. The lack of accountability is a significant reason the disaster happened and needs to be addressed to prevent next time.

This was entirely foreseeable and preventable, but how do we prevent next time? For starters take politics out of the equation. Green energy isn’t the cause or solution. Unlike summertime power usage, wintertime power need surges are not amenable to green energy solutions. In the winter power usage increases at night when the temperature is colder, but people have not gone to bed. This means solar power generation is zero at the time of greatest need. Also, bitter cold is the result of high pressure, and high pressure systems are noteworthy for their lack of wind. Radiational cooling is most effective in calm winds. Wind turbines are not going to be effective.

Cold snaps like this aren’t a surprise. We had many days reliable notice from all the weather models that an Arctic outbreak was going to happen. Better regulation (or a legislative mandate) requiring facilities that have capacity reduced ir shut down for the winter can be made operational in 72 hours. We also need to copy what happens to pipelines farther north and how they prevent freezing pipelines.

Lastly we need to make sure that power is conserved as best as possible. Toyota Center, as well as a significant portion of downtown, still had power on the 16th while the crisis was raging. Local governments need to make sure that residential consumers are prioritized over commercial customers in time of crisis. In Harris County this falls squarely on the County Judge and mayor of Houston. A measure needs to be taken to City Council to ensure that residential customers are prioritized and divert city personnel to make sure this is enforced as necessary.

This is entirely possible; my office is in a Boxer property and Boxer turned off power and water and we are not allowed into our building until Monday. Some businesses are being responsible members of society. The City and County need to step in to ensure that the irresponsible businesses also step up. This needs to be done on an individual business by business level rather than by grid action so gas stations, grocery stores, etc are able to continue operating and warming centers remain open.

The local executives were quick to issue orders because of Covid after a state of emergency was declared. Governor Abbott was proactive and declared an emergency on February 12. Where was Judge Hidalgo’s order or Mayor Turner’s order? This would have prevented things like Toyota Center from wasting scarce electricity. It’s too late now, but in the next energy crisis the local leaders stepping up as soon as the emergency order is issued will go a long way towards limiting electricity waste.

In a preventable disaster of this magnitude the public is going to want accountability. While it’s not fair, the buck stops with those in charge. Both Abbott and the Railroad Commission are going to suffer some public backlash and need to act to show they share the outrage the public has over this disaster. To that end, Abbott needs to sack the three public utility commissioners. They are unaccountable bureaucrats that all too often side against the public. They bear a significant amount of responsibility for the disaster and sacking the commissioners is a good starting point for Abbott to show he hears the public outrage.

With the Railorad Commission we actually have some degree of control at the ballot box. Commissioner Chirstian was especially well positioned to prevent the pipeline issues given his position on the Railroad Commission as well as his appointment to the Interstate Oil and Gas Compact Commission. He needs to step up to the plate, accept responsibility for the failure, and explain what is going to happen with both entities he is involved with to make sure we never have a repeat. If he doesn’t, we need to make sure he loses his next primary as both an accountability measure as well as making sure we hold the seat in the future.