You are here: Home / Politics / National / Subsidize the Arts and Humanities?

The Trump administration wants to defund the NEA, NEH and public broadcasting 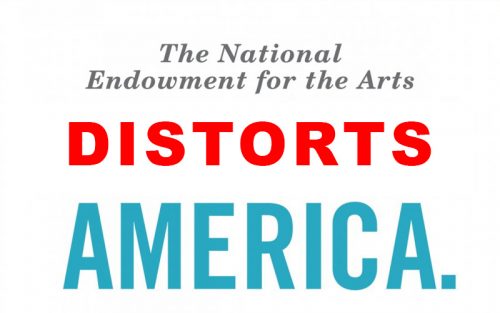 Congress has just returned from one of its frequent breaks.  The House is faced with passing a budget to avoid a damaging government shutdown.  There are several contentious items that the Trump administration is pushing.  One is the building of a wall along the Mexican border.  Another is the defunding of subsidies for the arts and humanities.

The defunding of NEA and NEH probably would not have been proposed were it not for the “Piss Christ” photograph and the “Tongues of Flame”.

In 1989, contemporary artist Andres Serrano exhibited his “Piss Christ” (Serrano’s title) photograph of a crucifix submerged in a jar of Serrano’s blood and urine. The exhibit was a deliberate attempt by the artist to offend members of the Christian faith. Serrano had received a $15,000 grant for his exhibit from the NEA.

In 1990, the “Tongues of Flame” exhibit by artist David Wojnarowicz consisted of several offensive depictions of Jesus Christ, including one of Jesus “mainlining” heroin by injecting a hypodermic needle into his arm. Wojnarowicz’s exhibit was also funded by the NEA.

I am sure that even someone with half a brain can agree that funding such outrageous and offensive ‘art’ is a terrible waste of the taxpayers’ money.  While those creeps Serrano and Wojnarowicz had every right to exhibit their anti-Christian smut, the NEA did not have to dole them the funds to do it.  But is that any reason to defund the federal subsidies to the arts and humanities?

As for public broadcasting, conservatives are angry with the far-left slant some of its programs have taken on, and well theyshould be.  But those leftie programs constitute only a small part of public broadcasting.  For the most part the public radio and TV programs are very informative on a great variety of subjects.

The reasons given for defunding the NEA, NEH and public broadcasting is to help slash the federal deficit.  Well and good.  But is defunding the three programs really going to cut down on the deficit?  Let’s look at the appropriations in the 2016 federal budget:

All appropriations except for the NEA, NEH and public broadcasting: $3.899 trillion

Corporation for Public Broadcasting: $445 million.  That is 0.01 percent of the total spending.

So there you have it.  Cutting the funding for the NEA, NEH and public broadcasting will have absolutely no effect on the federal deficit.

Because those programs do far more good than harm, I’m for continuing to subsidize them.