Speaker Straus, will you let the people’s representatives vote on SB6, the Women’s Privacy Act?

No men in women’s bathrooms! 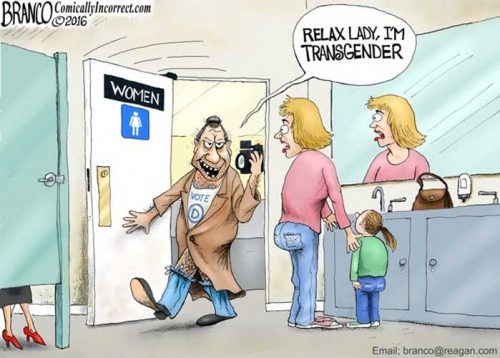 On Wednesday, March 15, 2017, the Texas Senate overwhelmingly passed, on third and final reading, SB 6, the Safety Bill for Women’s Privacy, by a 21-10 margin.SB 6 has now been sent to the Texas House. It must pass the Texas House and be signed by Governor Abbott for it to become the law.

Straus has made it clear that he does not think that SB 6, The Women’s Privacy Act, is important. Straus seems more concerned about the irrational thought of loss of conventions in San Antonio, to companies who support allowing men, who claim to be women, to enter the women’s bathrooms, showers and locker rooms, than he is about protecting women’s and girls’ safety and privacy.

What price would you place on protecting the safety and privacy of your mother, wife, daughters and granddaughters? A few conventions? Their protection is priceless!

The issue boils down to this“No Men in Women’s Bathrooms!”Do you support this position or not? Pretty simple, isn’t it?

A moral wrong does not make a civil right.

If something seems nonsensical, then you have to follow the money trail. Just find out who supports Straus and what their philosophy is about sexually deviant behavior.

Straus is married with two daughters. Is Straus willing to sell out his wife’s and daughters’ safety and privacy for conventions in San Antonio? If he is, then that is just pitiful.

Straus continues to propagate “Fake News” regarding the negative economic impact SB 6 may have on our economy. Senators Kelly Hancock and Paul Bettencourt discredited this position in questioning Marxist, socialist, liberal, pro-homosexual Democrat Chris Wallace, the President of the Texas Business Association,http://crtxnews.com/liberal-chris-wallace-leads-texas-business-association-tab-left-opposes-lt-gov-patricks-bathroom-bill-2/, during the Senate State Affairs hearing on March 7, 2017. Watch their interrogation of Wallace,https://www.facebook.com/freedomfortx/videos/397904613906149/.

Instead of allowing a spirited debate like we saw in the Texas Senate over SB 6, Straus plans on slow playing SB 6 to ensure its death by having one of his lieutenants sponsor SB 6 in the House and by sending it to the House State Affairs Committee, chaired by“Pro-Gay Republican,”Rep. Byron Cook.

Straus will keep SB 6 from being voted upon by the entire House. He will allow it to be added to the bottom of the list of bills which will be voted upon at the end of the session. His allies in crime, the Democrats, will “chub,” filibuster, other bills ahead of SB 6, in order to make sure that SB 6 is never voted upon by the House. Straus and his lieutenants will then blame their partners in crime, the Democrats, for killing SB 6. Straus, his lieutenants and the Republicans will then go back and tell their constituents that they supported SB 6, but blame the Democrats for killing the bill. I have been involved in politics for over 40 years and I am telling you that this is the way that politics works. This is Joe Straus’ MO whenever he wants to kill conservative legislation and keep his and other Republican members’ fingerprints off the dead body of a bill.

We, the people, cannot sit idly by and allow the safety and privacy of our mothers, wives, daughters, and granddaughters to be sacrificed on Joe Straus’ altar of political correctness. Remember, Joe Straus owes his position to Democrats. In 2009, Straus locked arms with 65 Democrats and 11 Republicans to take out the former conservative Republican Speaker, Tom Craddick.

Straus should read the Republican Party of Texas Platform. If he were to read it, then he would find on page 11 the following position on gender identity:

“We urge the enactment of legislation addressing the individuals’ use of bathrooms, showers and locker rooms that correspond with their biologically determined sex.”

Straus is married with two daughters. Is Straus willing to sell out his wife’s and daughters’ safety and privacy for conventions in San Antonio?More importantly, is he willing to sell out YOUR school children by allowing public schools to continue to adopt policies that force girls to undress and shower with boys in Texas public schools? If he is, then that is just pitiful.

You need to take a stand in this battle to protect both the safety and privacy of your mother, wife, daughters and granddaughters.

The eyes of the nation are on Texas.Texas is a bellwether state. When Texas passes SB 6, it will send shock waves across the nation. Working together, you and I can stop the moral anarchy that is being perpetrated upon our society by those who promote and practice sexually deviant behavior.

All that is necessary for evil to triumph is for good men and women to do nothing.

“Through God we shall do valiantly, and it is He who will tread down our adversaries.”(Psalm 108:13)

Let’s press this battle to protect the safety and privacy of women and girls to its successful conclusion!Call Joe Straus’ office today, (512) 463-1000.

Keep posted on the progress of SB 6 atwww.crtxnews.com.

Boycott The Texans And The BLM Football League

The Greatest President Since George Washington