You are here: Home / Politics / State / So what does Allen West really believe?

Well this is awkward. Now that Allen West is the Chair of the Republican Party of Texas, he is going around the state endorsing candidates at all levels of government in the November election. It’s a good thing. Republicans have long ceded too many government positions to liberals, especially school boards. But it does strike me as odd that West would endorse someone that goes against the party platform and West’s stated views on the homosexual community.

First, remember what West said about denying the Log Cabin Republicans a paid booth at the recent state party convention.

We welcome people, but we are not going to acquiesce, appease, and water down our beliefs in order to accommodate and make others feel happy. We’re not shunning anyone that is a part of these organizations or believes in the LGBT lifestyle, but one of our major planks is that we support a traditional nuclear family, and I will not support an organization that believes the nuclear family is not important for the sustainment of Texas, and the sustainment of the United States of America. As a matter of fact, what has decimated our communities is the undermining of the traditional nuclear family.

(read the article on TexasTribune.com)

Whether or not you agree with West, that is the position that he has taken.

While I couldn’t find any specific plank in the Texas RPT platform opposing Diversity and Inclusiveness Training in public schools, I did find these two planks:

Clearly, the party is against LGBTQ indoctrination in public schools at any grade. But along comes Allen West and endorses a guy for a school board that is for Diversity and Inclusiveness Training at ALL grades of public school. Here is what Muni Janagarajan, candidate for Frisco ISD, wrote when he ran for the same position a year ago: 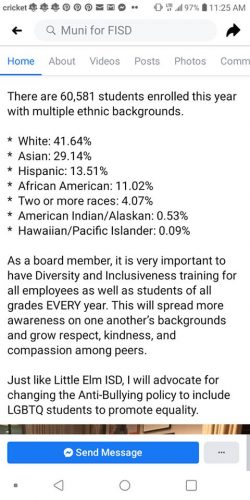 Not sure who to support for school board trustee in Nov? Allen West chooses Muni Janagarajan for FISD trustee. www.muniforfisd.com