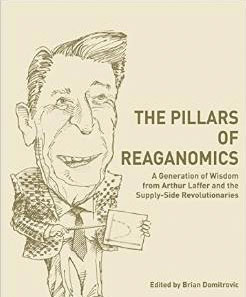 The Pillars of Reaganomics: A Generation of Wisdom from Arthur Laffer and the Supply-Side Revolutionaries, edited by Brian Domitrovic, represents a stellar addition to the supply-side economics library. What Brian Domitrovic has done here is he has taken monumental statements, monumental documents, and he has added some context and some history around them, and he has presented them in pretty much their entire original form.

This deeper, modern day context is really enlightening. And invaluable.

From a title that includes the word “pillars,” this book is exactly what you would expect it to be: Foundational documents that outline supply-side economics. What the title doesn’t tell you is that the commentary included in the book spans time from before Reaganomics (in the form of the Kemp-Roth tax bill), to the early days after passage and implementation, to the post-Reagan Presidency era of George H. W. Bush, Bill Clinton, and George W. Bush.

The content is most interesting because it is taken from papers prepared by Arthur Laffer or his staff from 1978 to the present. These papers consist of material not commercially available, even online in this day and age. I tried to Google some of the materials, and that proved a fools errand. For many years, other than in the Laffer archives, these papers may only be readily available because of the work of Brian Domitrovic in reproducing them.

The Pillars of Reaganomics includes original content from Arthur Laffer, Bruce Bartlett, Warren T. Brookes, George Gilder and Stuart Sweet. These writers, in the course of their scholarship, all offered great wisdom from others in the history of tax policy.

For example, Treasury Secretary Andrew Mellon had this to say in his 1924 book, Taxation: The People’s Business:

“The history of taxation shows that taxes which are inherently excessive are not paid. The high rates inevitably put pressure upon the taxpayer to withdraw his capital from productive business and invest it in tax-exempt securities or to find other lawful methods of avoiding the realization of taxable income. The result is that the sources of taxation are drying up; wealth is failing to carry its share of the tax burden; and capital is being diverted into channels which yield neither revenue to the Government nor profit to the people.”

And there is this gem from Ludwig von Mises in his 1949 book, Human Action:

“Every specific tax, as well as the nation’s whole tax system, becomes self-defeating above a certain height of the rates.”

Somewhat billed as a “running commentary” of the supply-side revolution, this volume does prove to be a running commentary, but it’s also a historical document full of historical context. Even saying that could possibly do it injustice in the sense that this is not just commentary, it’s a substantive, well researched, well put together, contextual volume that helps relay what was happening, why it was happening, and how it was happening. This all plays out like a novel at times, even a novel where you know the end of the story, but you forgot about this person or that incident.

Any book about the Ronald Reagan presidency includes timeless quotes from the Gipper, and this book does not disappoint on that score. Bruce Bartlett recalls a classic early-1981 quote from President Reagan in describing the nations economy:

“There were always those who told us that taxes couldn’t be cut until spending was reduced. Well, you know, we can lecture our children about extravagance until we run out of voice and breath. Or we can cure their extravagance by simply reducing their allowance.”

And Milton Friedman wrote this in Newsweek in 1978 to make a similar point:

Putting the sheer content of this volume aside for a moment The Pillars of Reaganomics is an outstanding addition to a library simply because of the work involved on the cover, which has an etching of a Ronald Reagan caricature holding a drawing of the Laffer Curve, and the interior of the book covers contain the tiled, gold-colored logo of The Laffer Center which published the book. This is just a really good physical object to hold and will make a great addition to the library of any Ronald Reagan fan or student of supply-side economics.

The Pillars of Reaganomics serves as a great place to start an education on what supply-side economics is, how the concept was implemented in various decades, how the numbers stood the test of time, and how the world is looking at the economics policy now. This book is an enjoyable read, it’s not wonky. Let us hope there is more of this to come.

I will conclude this review with the words that open The Pillars of Reaganomics, on the dedication page, because after reading them, you may be as convinced as I was that this book, and potentially this series, is headed in the right direction: