I wouldn’t have responded to Kevin Roberts’ attacks but Dan Crenshaw decided to.

Many of you have seen the negative campaign being run by Kevin Roberts. He is doing what politicians do best: misrepresenting ideas and slinging mud. We plan on keeping our campaign positive and focusing on the facts. Voters are tired of political cheap-shots. I recognize this, which is why I will continue to spread our positive message and ensure there is a future for our conservative values.

But I need your help. We need to make sure that Kevin’s dishonest attacks are being met with the TRUTH. I want to give you the following facts and I hope you will help me spread the word to your precincts, neighbors, and friends. When people have questions about the attacks, please give them the following answers:

1.     Kevin claims that my plan to fix Social Security involves raising taxes. This is untrue. I signed a pledge to not raise taxes. And it is very clear from my website that I am proposing mainstream conservative policies such as Private Retirement Accounts (PRA) so that we DON’T hurt taxpayers. It may not surprise you to hear that Kevin left this part out: “These contributions should be small enough so as not to invite unnecessary risk, but large enough so that future retirement benefits can be maintained without increasing the payroll tax.” No new taxes, period.

2.     Kevin claims that my policy on Medicare Part D will take away senior’s prescription drug care. He wants seniors to believe I’ll take away their prescription drugs. That’s wrong. Period. And I’m sad the race has sunk to this low. Scaring seniors into thinking life-saving medication won’t be there tomorrow is a horrible thing to do. The truth is that my plan is a conservative one advanced by President Trump. It establishes common basic formularies as an easy way to save taxpayer money while still giving seniors the drugs they need. Drug costs account for 40% of healthcare spending, and our current Medicare system is ripping off taxpayers by allowing drug companies to set the terms of negotiation. My policy has the support of doctors and more importantly, President Trump. With Medicare, Medicaid, Social Security, and interest on the debt accounting for $.70 out of every dollar the government spends, we have to get smart about reducing the $20 trillion deficit. I welcome and invite Kevin to offer a plan of his own, but we have yet to see one.

3.     Last and most disappointing of all, there is an ugly misrepresentation of a Facebook post I made in 2015. In that post, I aggressively DEFEND Christians from leftist attacks. I point out that the left’s attempts to compare Christianity to Islam are highly misguided. I point out that the worst criticisms the left uses against Christianity is our stance on gay marriage, whereas extreme Islam is responsible for beheadings, honor killings, and terrorism. Kevin says that I’m criticizing Christianity, which is an awful thing to say to a fellow Christian. Faith is the cornerstone of my life, and I think Kevin knows that. Voters deserve better than this.

4.     I also point out that Donald Trump’s remarks at the time were not helpful to the debate, and I was highly critical of then-candidate Trump because of one comment he made. Like most Texas conservatives, I backed a different Republican primary candidate in 2015-2016. But in summer 2016, President Trump won the nomination and earned my support. Since then, he’s preserved conservative values by lowering taxes, fighting for traditional judges and justices, rebuilding our military, and building the wall. These are things we should all celebrate and support!

Please help me to spread the TRUTH, because our voters deserve it.

Kevin Roberts is turning out to be quite the small man we should have known he was. He touts his “small business experience” which consists of being an office manager of his brother-in-law’s plaintiff’s attorney law firm. Quite the clue there.

But Kevin Roberts doesn’t need to focus on issues because by gosh, he’s a praying man (I absolutely love the first comment on this picture). 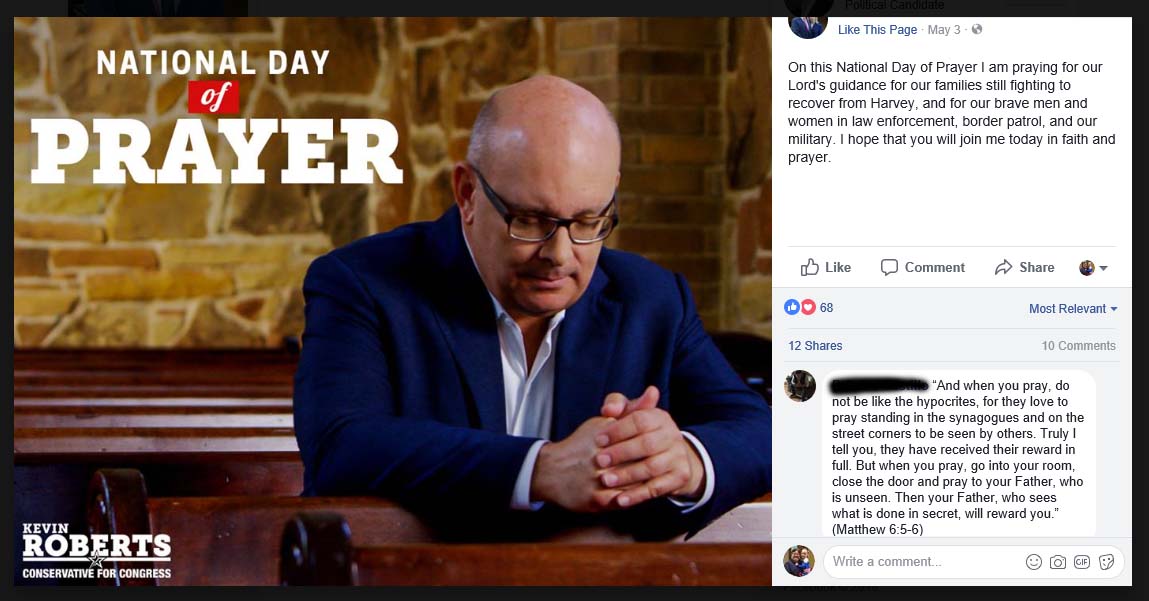